Yes, it’s Weekly Wonder Woman – keeping you up to date on pretty much anything involving DC Comics’ premier superheroine, including who plays her on TV in the comics

Another quiet week for Wonder Woman news, I’m afraid, assuming you don’t think a 12-strong march on Warner Bros to ask for a Zac Snyder cut of Justice League is news. Is it actually a march if there’s only 12 people? Isn’t it more of a throng or maybe a milling?

Sure, Wonder Woman‘s been nominated for the 2018 Producers Guild of America Awards.

11 films have been nominated for the 2018 Producers Guild of America Awards, including @PattyJenks’ #WonderWoman!

The producers for the film; Charles Roven, Zack Snyder, Deborah Snyder & Richard Suckle are included in the nomination

Very rare to see a CBM represented at the PGA pic.twitter.com/1TdF3pd5iA

But we’re still waiting to see if the movie could win an Oscar. What do you reckon the odds are? After all, if even the Teen Titans love Wonder Woman, surely the Academy must, too?

On the upside, though, lots of comics featuring our heroine this week and we’ll be looking at all of them after the jump. In Wonder Woman #38, we get the Rebirth version of old enemy The Silver Swan (who’s also an old friend). In Titans #19, Diana and the Justice League are a bit worried about Donna Troy – or at least her future self, Troia. And over in Harley Quinn: Be Careful What You Wish For Special Edition #1, Harley Quinn gets infinite wishes from a genie and decides she’d like to be Wonder Woman. But which Wonder Woman, hey?

All that after the jump… 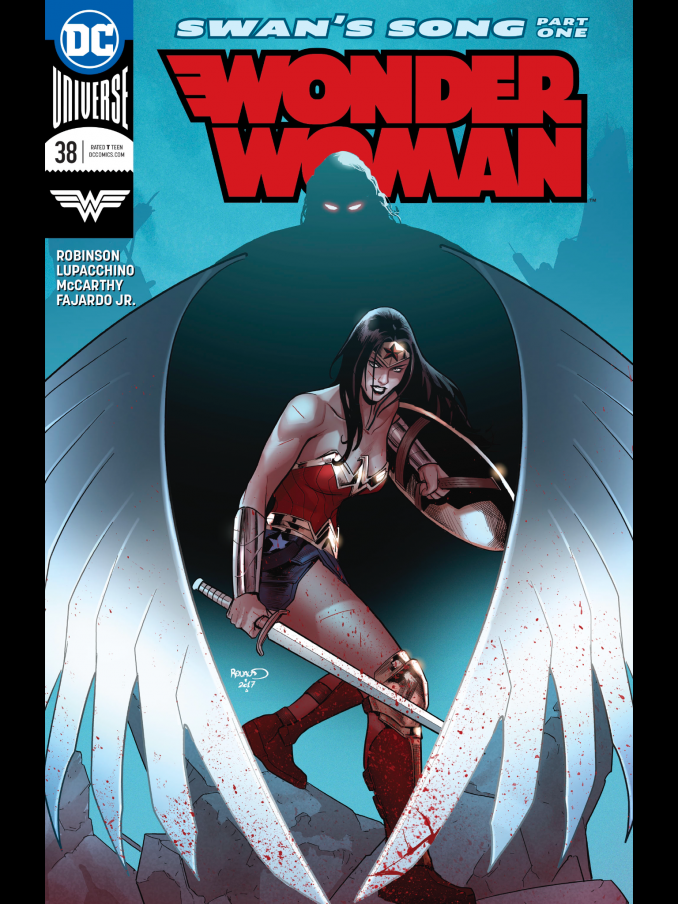 Diana saves a young Vanessa Kapatelis from dying at the hands of a supervillain, but the girl loses her ability to walk. Diana stays with her and becomes friends with her, but when other demands are placed on her, she can’t spend enough time with Vanessa any more. 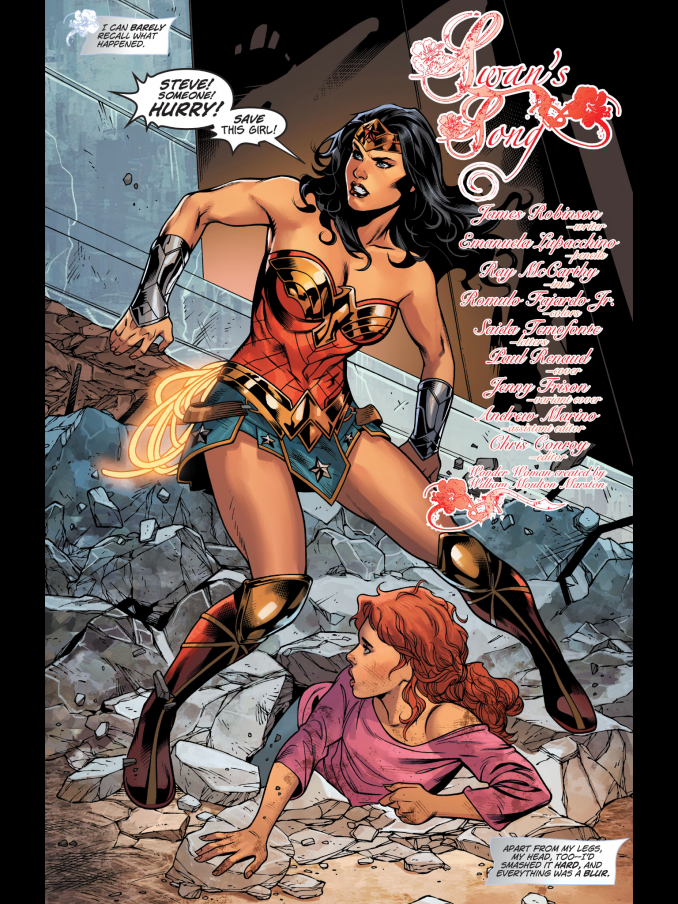 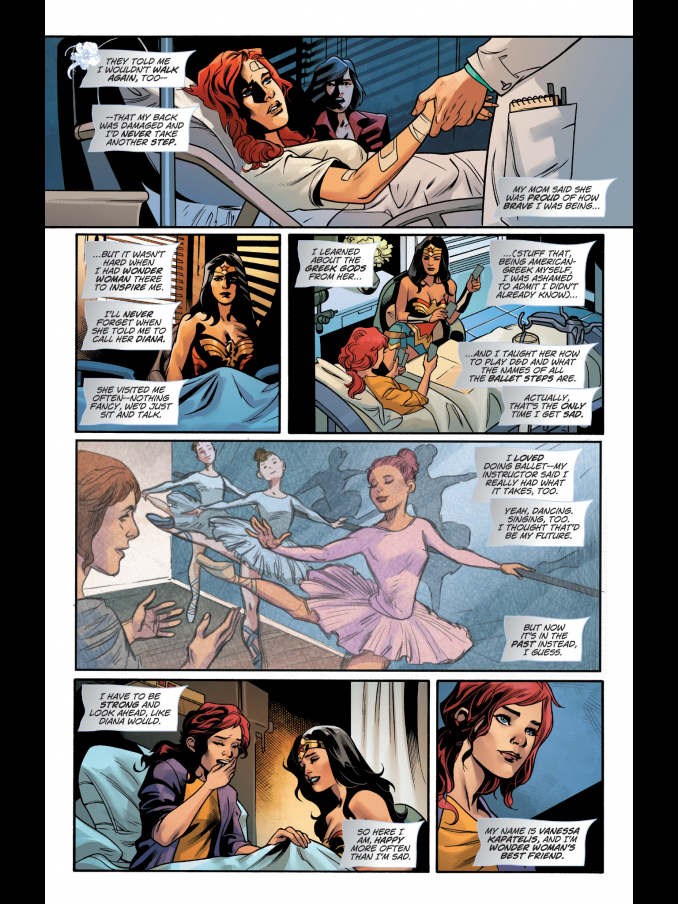 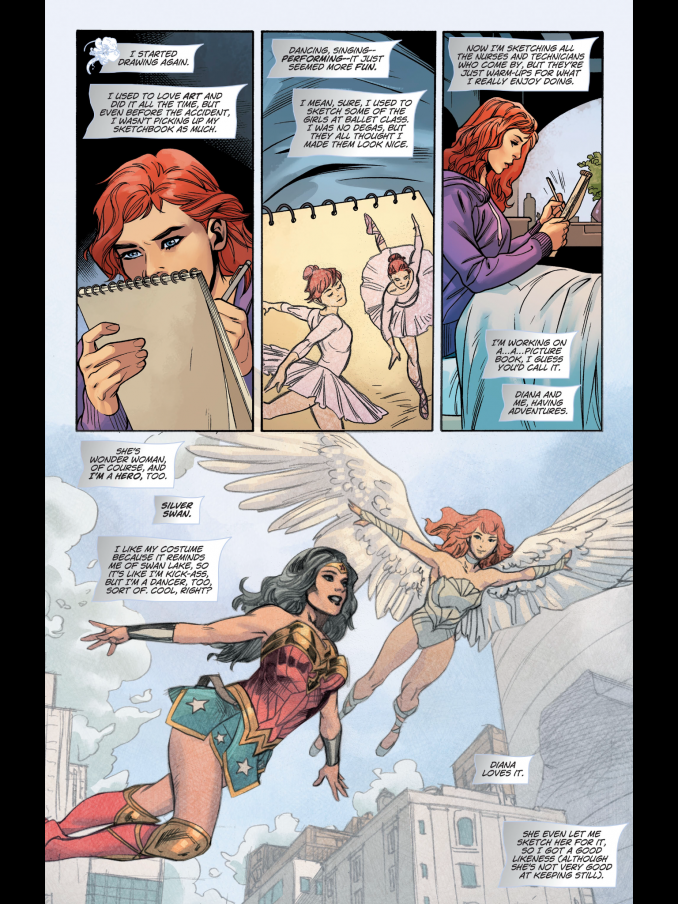 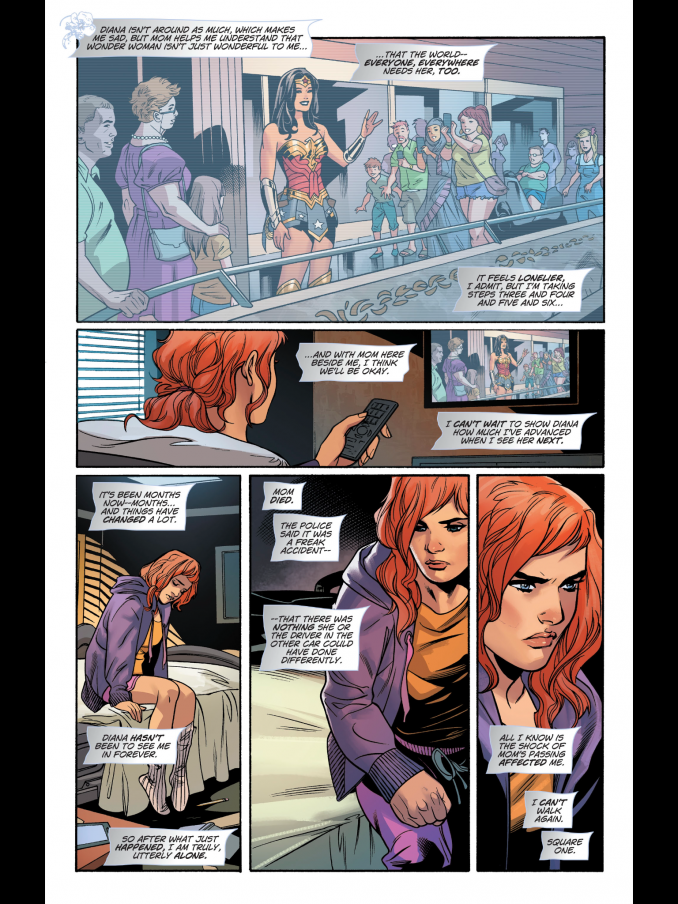 When Vanessa is given Cyborg-inspired nanites, she recovers her ability to walk, but she’s started to go a bit crazy. And when she sees Diana has new friends whom she’s rescued, she kills them – becoming her greatest enemy, The Silver Swan! I assuming the nanites had something to do with her getting wings, otherwise that’s some top hobbies work. 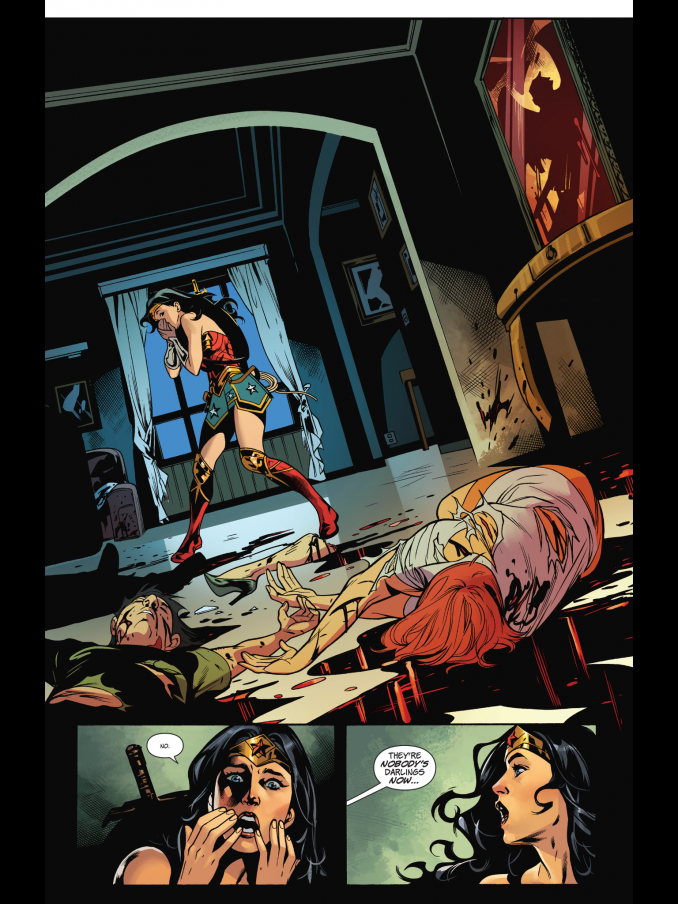 Meanwhile, Jason’s moved in with Diana and is trashing her new home. 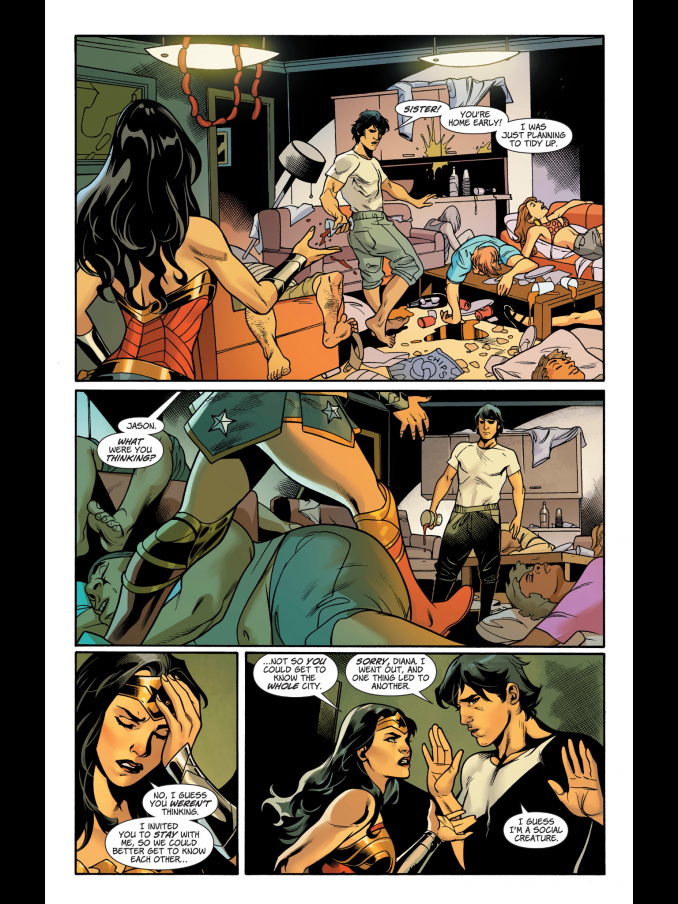 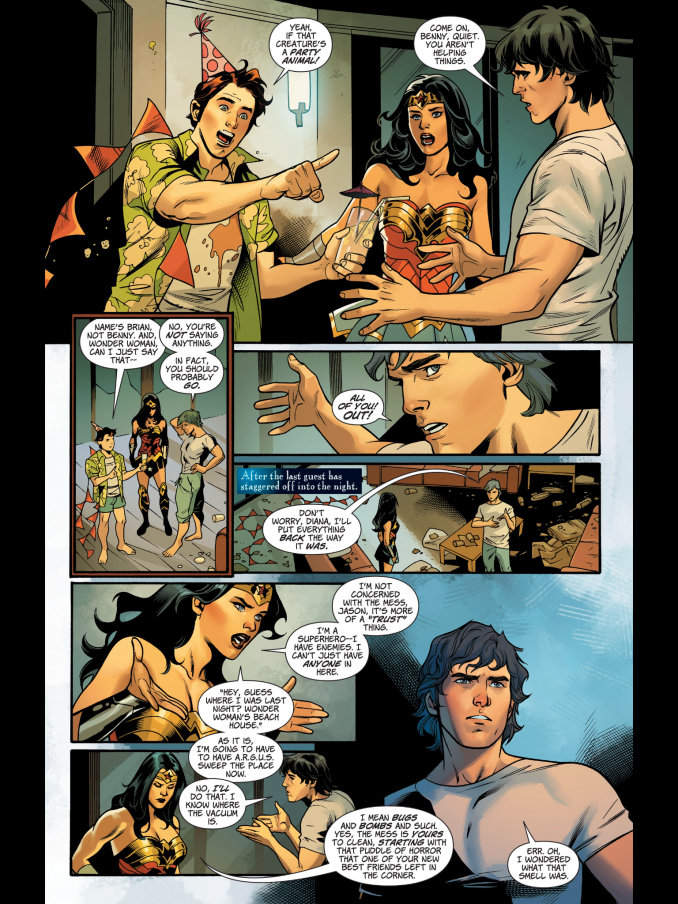 While Steve himself is off looking for the relics that Darkseid was after. I wonder if they’ll be useful. 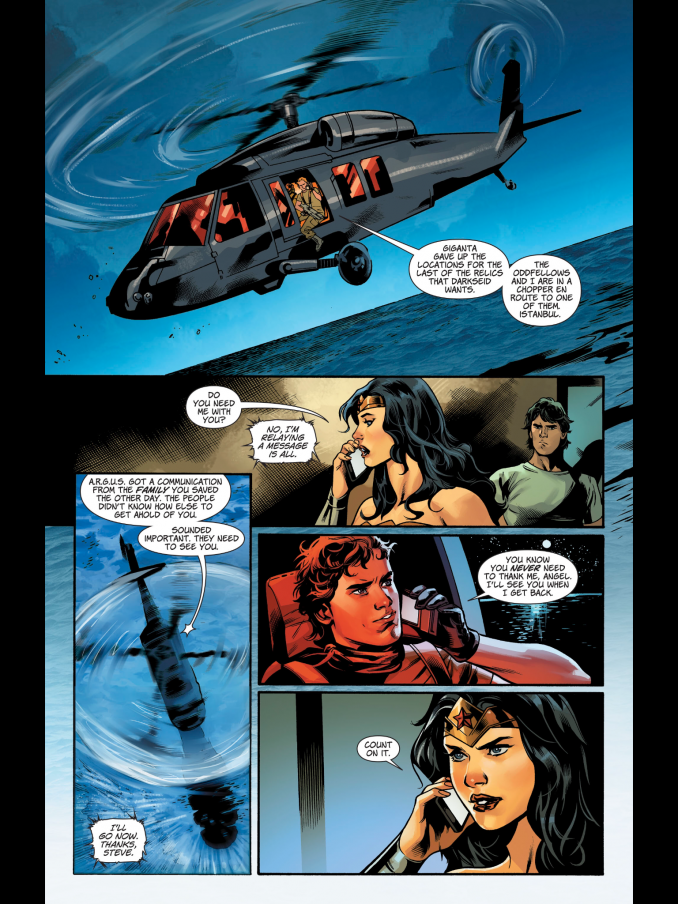 I won’t go into the long and exciting history of The Silver Swan here, because I gave it my all back when Wonder Woman ’77 #1 came out. But what’s notable here is that after showing his love and devotion to all things 70s in previous issues, writer James Robinson here goes straight for the 80s version, rather than her predecessor, to resurrect George Perez’s creation Vanessa Kapatelis, who was the long-time friend of Diana in Man’s World starting from issue #3 of Volume 2.

However, as with Robinson’s quick retelling, things all go a bit pear-shaped for Vanessa over the course of her time on the comic. Although things works out nicely at first, ultimately she ends up with the old brain warp and becomes Volume 2’s second Silver Swan, complete with cybernetic implants. 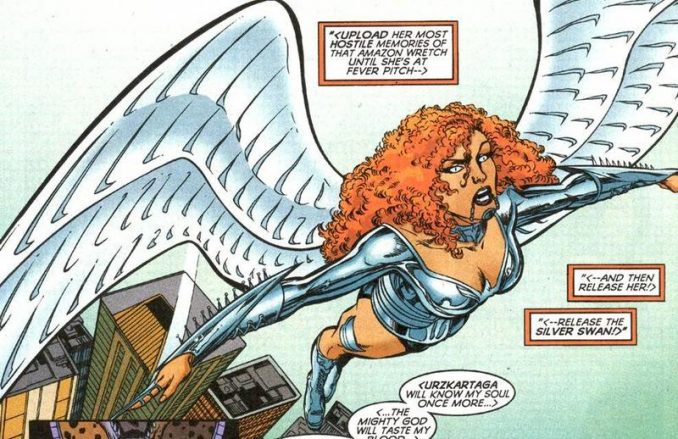 It’s clear that both Robinson and artist Emanuela Lupacchino are referencing the issue #200 version of Silver Swan here: 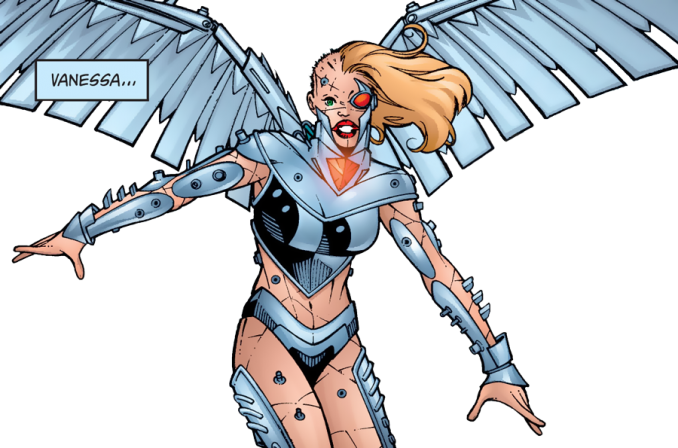 As an issue, in common with Robinson’s previous issues, there’s some pretty horrendous dialogue:

Wonder Woman, as usual, is either reactive or only appear on TV. She’s a little better at fighting than before, actually winning for a change, but that’s not saying much. The fact that her errant father, Zeus, died in her arms in the previous issue appears not to be bothering her too much, either, compared to whatever Jason and his mates sicked up in the corner of that new house Steve gave her.

Even Orion was a better addition to the Wonder Woman cast than this.

On top of that, you have to wonder exactly what sort of medical treatments allow you to transform yourself into a supervillain. Is that a bug or a feature of the nanites? Did no one do any testing with them beforehand?

Still, what’s becoming apparent is that even if he produces comic book nonsense, Robinson can at least write a story, plunder continuity and develop a bad guy pretty well, even if he’s not that great at writing for Diana herself.

Other note: what’s happened to poor Steve? He appears to have transformed into a 16-year-old boy. 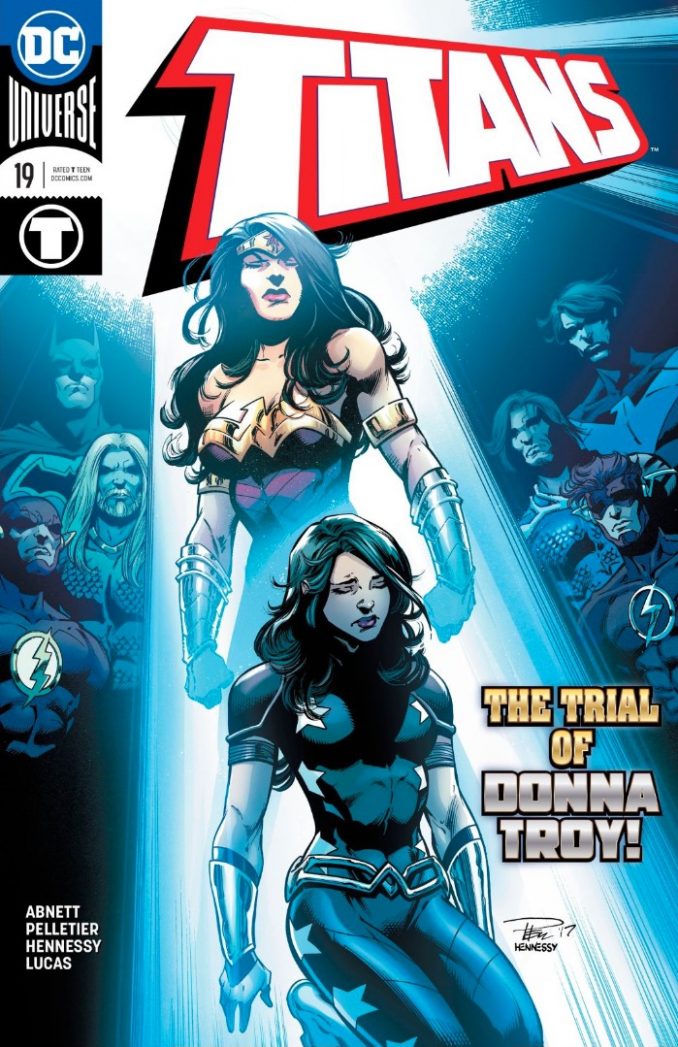 Everyone’s worried about Donna Troy’s future self, Troia, even the Justice League, so they come to see if she’s okay.

Offer to help Donna, although Donna suspects she has bad motivations. 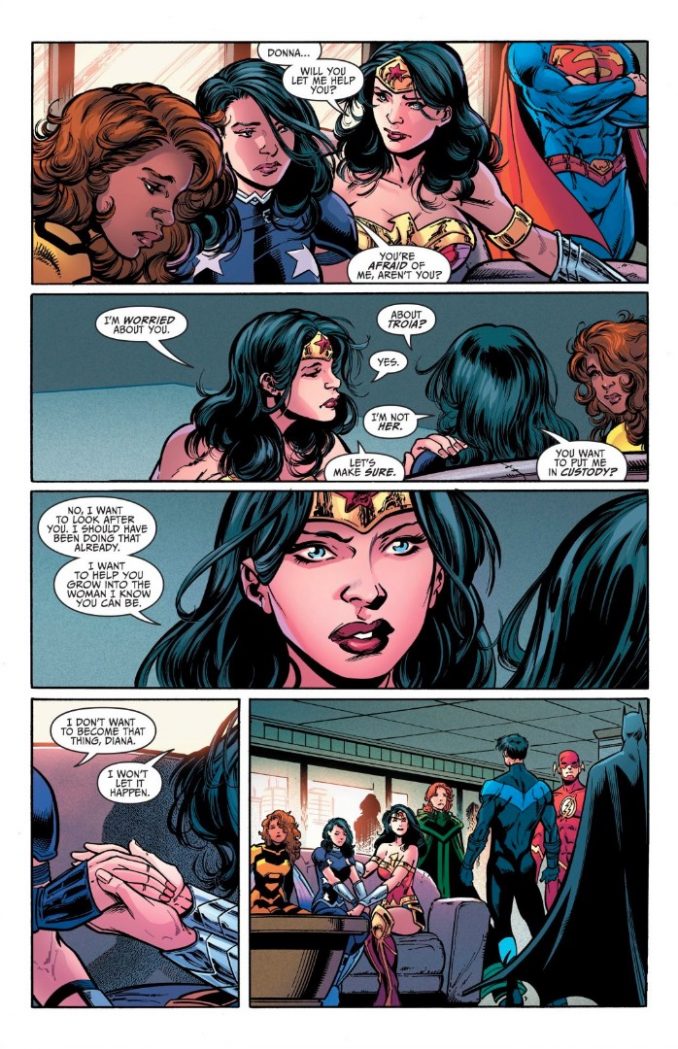 There is no trial. Nor AFAIK, any determination of where this Donna Troy actually came from if everything in the nu52 related to the Amazons was purely imaginary. Any ideas? 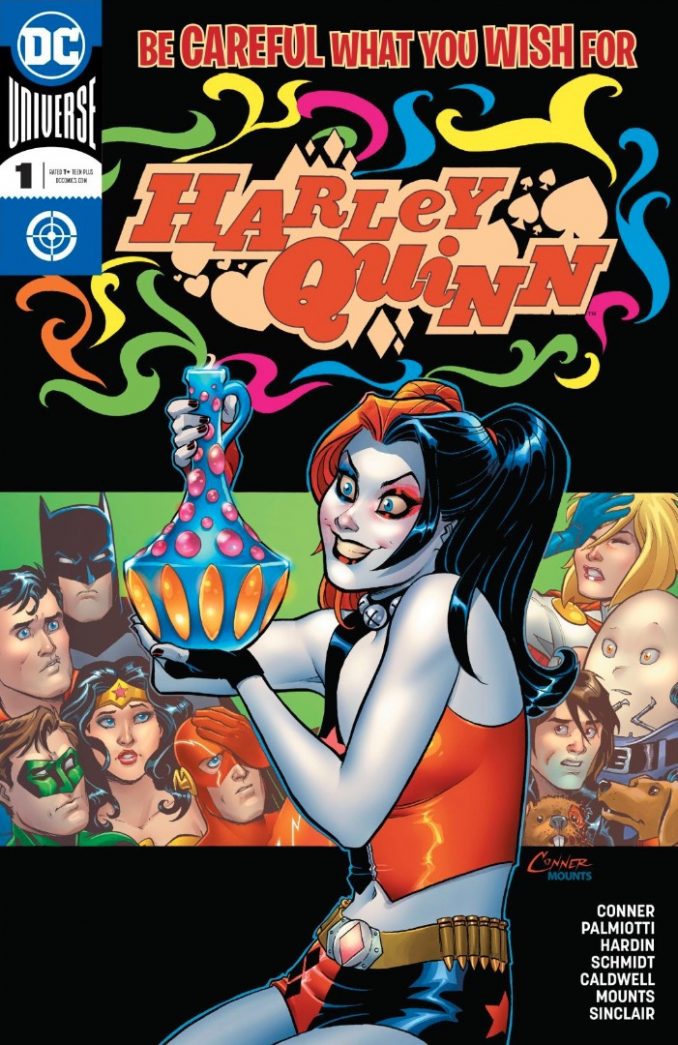 Harley Quinn: Be Careful What You Wish For Special Edition #1

Harley Quinn gets access to a genie, who gives her infinite wishes.

Get rescued, along with the Justice League, by Harley from Lex Luthor and his super suit. 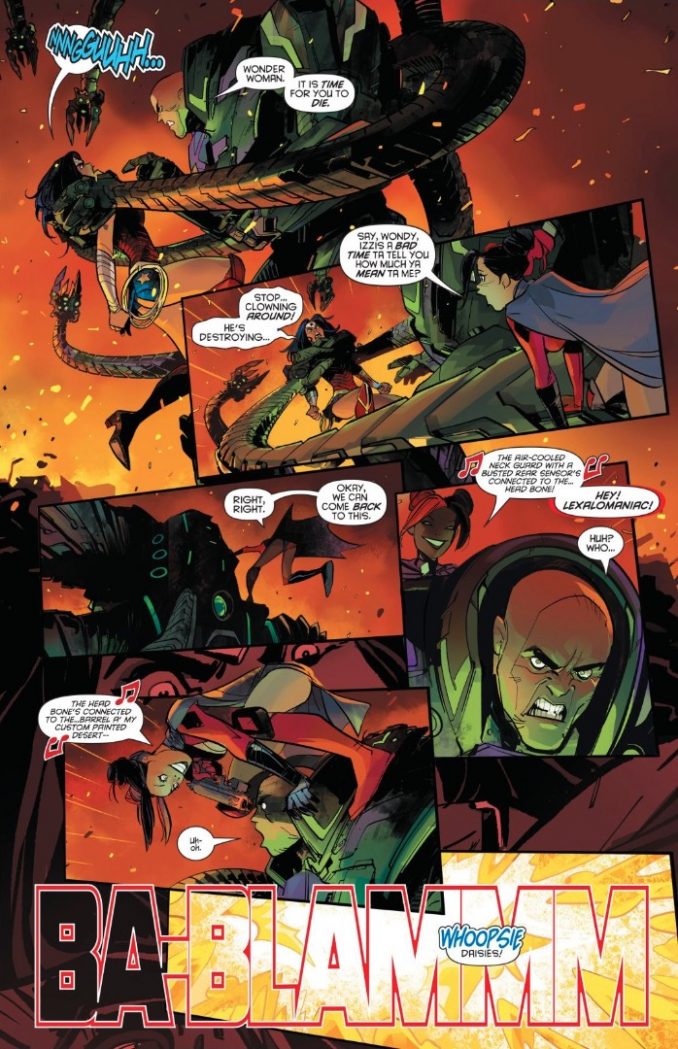 Get told off by Wonder Woman for killing Lex Luthor. 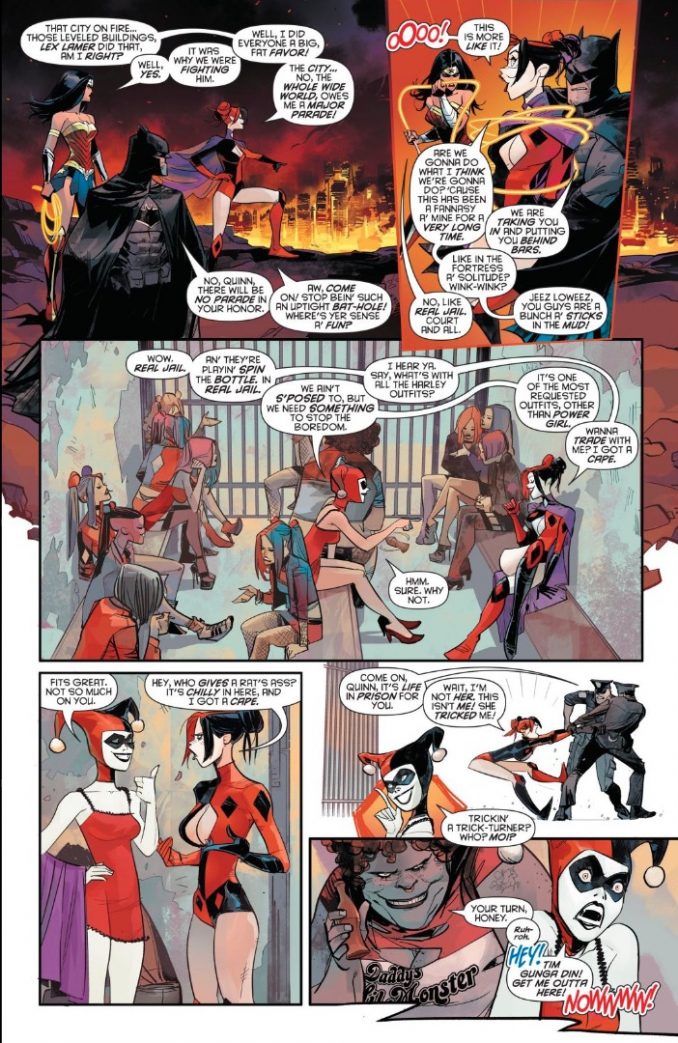 Obviously all that’s a load of fun and not 100% canon, as per usual with anything involving Harley and Diana. More interesting is when Harley wishes to become Diana. 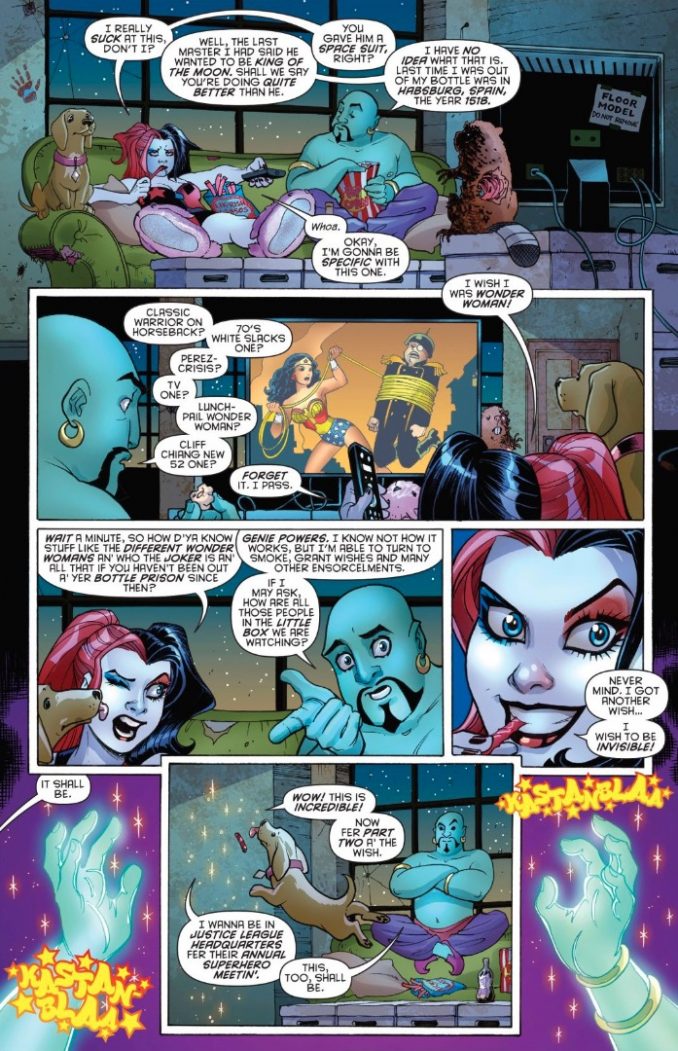 Yep, the genie knows about everything from Neal Adams’s kung fu Wonder Woman through to Cliff Chiang’s to Lynda Carter/Wonder Woman ’77, who might be the TV version of Wonder Woman in the DC Prime Universe by the looks of it. He even knows about the lunch box version.