Every week or so, TMINE flags up what new TV events BAFTA is holding around the UK

BAFTA seems to be adding precisely events to its February line-up at the rate of precisely 1 event/week, so add to the previous two events (Matthew Hall on Writing and a look back at Manhunt) this new one, which is a preview of ITV’s The Widow. I should point out that when I posted a trailer for it on Tuesday, I billed it as Amazon’s The Widow – it’s actually a co-production between ITV and Amazon and will air here on ITV, but the trailer (which you can see below as well) is Amazon’s for overseas audiences.

A preview of the new ITV drama followed by a Q&A with the creative team.

From BAFTA nominated screenwriters Harry & Jack Williams (Liar, The Missing), The Widow tells the story of Georgia Wells (Kate Beckinsale) who has her life turned upside-down with a phone-call in the middle of the night. Her husband of over 10 years, Will, has been reported dead after a plane crash in the Congolese jungle.

Three years later, with her old life now a thing of the past, Georgia learns something shocking. Something that will take her to Kinshasa in the Democratic Republic of the Congo, looking to uncover the truth about his disappearance.

“Every family has a story, every story has a beginning,” trumpeted Smallville when it first hit our screens. You’d have thought 10 seasons of the once longest-running US TV sci-fi series – as well as Man of Steel – would have been enough to tell the story of the beginnings of both Superman and his family but now we have Krypton, another Superman prequel.

Given that Man of Steel told us more or less all we needed to know about Daddy Superman, Jor-El (Russell Crowe), and why he sent his only son Kal-El to the Earth, Krypton takes the slightly odd decision of moving the action back a generation to Granddaddy Superman when Seg-El is young and played by Cameron Cuffe (The Halcyon) – odd because we know that Krypton ain’t exploding for a good few decades yet, so what exactly is the story going to be and where’s the peril coming from? 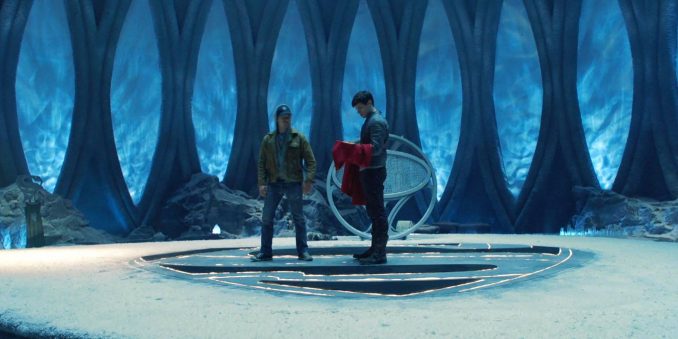 Krypton is the brain-child of Man of Steel writer David S Goyer so don’t be too surprised that everything you saw in Man of Steel is both canon and the basis of Krypton‘s plot.

Here, the house of El is down on luck because Seg-El’s granddad (Ian McElhinney) decided to side with terrorists against the ‘Voice of Rao’, the planet’s new tyrannical religious leader (Rao being Kryptonians’ God). After his death, they lose their house status, leaving Seg to lead a drifter’s life among the house-less, fighting for money. Meanwhile, his dad (Sherlock‘s Rupert Graves) and mum Paula Malcomson (Caprica, Sons of Anarchy, Ray Donovan) are making ends meet by pouring wine for the high-born.

However, soon Seg is on the up and betrothed to someone from House Vex through the generosity of chief magistrate Elliot Cowan (Lost in Austen, The Fixer), even though he’s really in love with Georgina Campbell (Broadchurch) of House Zod (yes, Zod).

Do we care? Not really, and episode one is really just an introduction to all of this, rather than anything obviously designed to make us give a monkey’s about quasi-space feudalism.

Instead, interspersed among all of this is the occasional appearance of Shaun Sipos (Shark, Life Unexpected), an American from the future who’s come back to warn Seg-El that someone else (spoiler alert: (spoiler alert) Brainiac) has come back from the future to destroy Krypton before the universe’s greatest hero, Superman, is even a glint in the glint of someone’s eye. Back to the Future-style, Seg has to find McElhinney’s Fortress of Solitude and save the planet before the red cape in his hand disintegrates.

Well, save it for a generation, at least…

END_OF_DOCUMENT_TOKEN_TO_BE_REPLACED

Although March might be a bit of a wash-out for tele at the BFI, April is looking a whole lot more promising thanks to the BFI & Radio Times Television Festival. I’ve already given you the highlights, but the BFI has now provided the rundown for the whole thing, including some shiny new events, special guests and even some archive French TV featuring Tom Baker. Being lazy, I’ve copied and pasted the whole shebang below.

The BFI and Radio Times today announce the full line-up for the BFI & Radio Times Television Festival, celebrating the current golden age of TV with more than 40 events featuring some of the biggest names on the small screen. The new events announced today include the stars, writers and producers of some of the biggest TV shows of the year; including The Crown, Victoria, The Night Manager, Line of Duty, Poldark, Sherlock, Black Mirror and Strictly Come Dancing. Joining the line-up of TV stars is acclaimed director Sir Ridley Scott, who will be in conversation following a screening on Saturday 8 April of The Author of Beltraffio (TF1 1974), a precious gem which has recently been rediscovered by the BFI National Archive, and was directed by Sir Ridley’s brother, the late Tony Scott. This TV drama has been unseen since its UK transmission in 1976 and stars Doctor Who’s fourth Time Lord Tom Baker.

Other highlights announced today include:

TREASURES FROM THE BFI NATIONAL ARCHIVE:

TV networks around the world are starting to crank into life, with a few old favourites returning to our screens and a few more new ones on their way this week (Canada – I’m looking at you here). That means that after the jump, as well as the latest episodes of Shooter and Sherlock, I’ll be looking at the return of Lethal Weapon, Man Seeking Woman, and Son of Zorn.

I’ve not yet had a chance to watch NBC’s gritty Wizard of Oz adaptation, Emerald City, from Friday, so I’ll be reviewing that separately on Wednesday. But the other major newbie out last week was…

Beyond (US: Freeform; UK: Available now on Netflix)
A gender-swapped insipid amalgam of every other Young Adult sci-fi/fantasy show you’ve ever watched, whether it be Twilight or even Freeform’s own Kyle XY, in which a young adult (Burkely Duffield in this case) discoveres he’s very, very special for some arbitrary reason and both a skulking conspiracy and a band of goodies want to recruit him to their respective teams.

Here, the conceit is that Duffield was knocked out when he was 12 years old and since then has been in a coma. Except during that time, his disembodied consciousness went to another realm – unimaginatively called The Realm – something that’s given him telekinetic/firestarting abilities. Waking up, he’s pursued by a ‘man in a yellow jacket’ (Peter Kelamis), as well as a foreign-sounding ‘ninja girl from The Matrix‘ (Dilan Gwyn), while having visions of an old man (Alex Diakun). Duffield not only has to recover his memories from that time in The Realm and try to escape those who would control him, he’s also got to get used to the new world of cellphones, Wikipedia and being a 12-year-old in a 24-year-old’s surprisingly unatrophied body. There’s also all the changes in his family, with younger brother now effectively the elder brother and his parents having separated.

There are moments in Beyond – most of them in the pilot – where the show’s almost cool, such as when Duffield uses his powers for the first time. There’s also a sweet charm to Duffield’s character, who tries to woo girls by talking about science and history, because that’s all he knows about, having missed out on half his life. Kelamis’s ‘yellow jacket’ is both sinister and amusing, and the introduction in episode 5 or so of a coma-girl with powers of her own was a welcome addition.

But I managed to sit through six episodes without finding anything much more than that, although maybe I should have held on a bit longer until Martin Donovan shows up as the Big Bad. There’s not much danger, nothing too exciting about The Realm beyond a few dogs. Duffield’s powers seem to consist of accidentally blowing things up a lot, which gets boring after a while. Gwyn is far less Trinity, far more Bella (but before she gets all cool and vampirey), constantly pining after Duffield but never actually doing much.

The show also has a 24-year-old’s memory of history. So while it’s interesting we learn that US youth have in just 12 years gone from first making phone calls to talk to someone they like to texting them (something last week’s Lethal Weapon touches on, oddly enough), everything else exists in an oddly timeless vacuum. While we’re clearly in something like the present day, judging by the phones and the CSI:Miami-style floating displays and touchscreens behind invalids’ beds, Duffield doesn’t know about Apple Computers (iPod generation 2 released 2002) and his 12-year-old self had a bedroom adorned with original Star Wars and Empire Strikes Back posters. Meanwhile, Kelamis wears a pair of glasses straight out of 1988.

All in all, you’re probably better off watching Shadowhunters, if you’re going to be watching any YA fantasy shows.