Cyberman: Did your sensors detect the fluid that I just expelled from my right lateral articulator joint?

Dalek: My probes observed the phenomenon

Cyberman: Are they able to analyse it?

Dalek: They report it is composed of waste oil and grease and certain biochemical solutions

Cyberman: Where is it now?

Dalek: It is sinking into the floor where it is being absorbed by human excretions such as dandruff and hair

Cyberman: That’s your void ship that is. Your mum made that. It’s like the best thing she’s ever done.

Dialogue from Doctor Who episode Doomsday.


So it’s the end, but the moment has been prepared for. The Daleks and the Cybermen had a great big fight and Rose is stuck in another universe. And it was all just so mediocre.

But nothing can alter the fact that from about 7.20pm on Saturday night I was clock-watching.

END_OF_DOCUMENT_TOKEN_TO_BE_REPLACED

And thus season two of the new Doctor Who begins to crank itself up for the finale, while simultaneously winding itself down. There was good, there was bad, there was ugly. But, in contrast to the last few episodes, there was far more good than there was bad this time.

Doctor and Rose return to Earth in the “present day” and drop in on Rose’s mum, Jackie. As it happens, Jackie’s waiting for the scheduled appearance of her dead father. As you do. Needless to say, when a ghost turns up as predicted, the Doctor isn’t totally convinced he’s what she thinks she is and tries to work out what’s actually going on.

He eventually narrows down the source of the ‘ghost’ activity to Canary Wharf and Torchwood, the launch site of the new spin-off TV series a top secret government institute that investigates alien artefacts. There we find a ‘Void Ship’ of mysterious origin and before you know it, a bunch of cyber agents who have infiltrated our universe from the parallel universe we saw in The Age of Steel. Using the hole in the universe created by the arrival of the Void Ship, the cybermen manage to bring their entire army over into our reality. The world is theirs.

But wait! The Void Ship isn’t cyber-technology. Inside are… a bunch of Daleks. Cue end titles.

So all in all, very exciting. The usual RTD hallmarks were on display – cameos by people from other TV shows (not all of which were awful); movie references; ‘typical’ teenage behaviour (Here’s me washing, Mum!); very sly continuity references (“The Eternals call it ‘the Howling’.” Those would be the Eternals from the Peter Davison story Enlightenment and also from the 2005 Doctor Who Annual), etc, etc. But while the Ghostbusters bit was excruciating, the rest of it was actually kind of fun and forgivable.

David Tennant was giving a relatively calm performance this time round and Billie Piper had a return to form, finally getting something to do that was all about Rose. Graeme Harper did a reasonable job of directing but not outstanding – I don’t feel he’s quite had the dark story he needs to really show off his stuff. Murray Gold still can’t do incidental music. Oh well. But all in all, pretty good.

Now for the niggles. The plot was full of holes, which can be forgiven. But… Torchwood built Canary Wharf to investigate to the anomaly in the sky. So where the hell was the Void Ship all this time? Just lurking there in the sky? Funny, I’m pretty sure most of London would have spotted it. Or did Torchwood somehow manage to carry the ship back up to the top of Canary Wharf (even though they can’t touch it) once they’d built it, with presumably the Void Ship lurking in East London in a pub or something until it was time to come up. And how come Torchwood was telling everyone when it was going to conduct its experiments so there would be ghost forecasts? Renovation work on Canary Wharf? It’s not that old and wouldn’t Torchwood’s director know about it. And wouldn’t the Cybermen have come through the anomaly and be spotted? And, and…

But any Who plot has problems when exposed to the cold light of day, so let’s not get too caught up in that.

The Cybermen. Obviously going to turn up so no surprise there, but they’re still just not as scary as they should be. They’re too friendly looking. You want something that has a stench of the graveyard about it, really. Instead, we get flares and a friendly face. Not good. Still, there’s enough of them to be frightening: one cabbage patch kid isn’t frightening; 10,000 cabbage patch kids coming to get you – very frightening.

So actually a pretty good episode. Could have been better, but actually not bad. Now for a few notes:

Mickey: Nice to see him back. I had a vague inkling we were being led up the garden path on that one. Consider this. The return of the Cybermen was inevitable. They wouldn’t be this universe’s Cybermen, so it would have to be the new-look Cybies. That means there was a way for Mickey to come back. Couple that with the fact that in the Mickey send-off retrospective, Doctor Who Confidential didn’t once ask Noel Clarke what he was going to be doing next and there’s been no media blitz at all on that subject (unlike Piper) and it just suggested to me that he might be coming back. Mickey for the new companion anyone (now that whatserface that The Sun suggested has been dispatched into the sky)?

Piper: Still not sure she’s leaving. Still convinced this is a bluff, although the return of Mickey does make it more unlikely. After all, if she’s dead yet mysteriously on a seashore, how can she be narrating? Or is she in Heaven? Or, as Marie suggests, on the other side of the portal? She’ll be back at some point. Maybe she’s in Hell, as suggested by The Satan Pit. Maybe it’ll be like Search for Spock next year, with the Doctor trying to find a way back to the other universe.

The Daleks: Saw them coming. Sorry. A fun cliffhanger all the same.

Now there have been some complaints about the Daleks coming back. But they Daleks had to feature, I’m afraid. Here’s why:

The important third point is that they’re necessary for the plot – or what I imagine the plot to be. If you think I’m likely to be on to something with my theory (which given my track record is unlikely), that it won’t be blindingly obvious and don’t want to be spoiled, don’t read any further.

1) Technically, Paul McGann did get a Dalek story since they appear in voice over at the very beginning of Doctor Who: The Movie. Also Pertwee meets the Cybermen in The Five Doctors. Plus there are all those Big Finish audios where Paul McGann meets both Cybermen and Daleks. But they don’t count really. It’s just not the same, I tell you.

END_OF_DOCUMENT_TOKEN_TO_BE_REPLACED 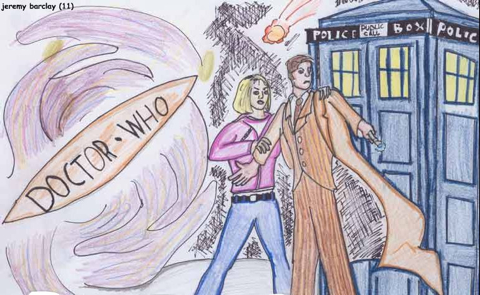 Ah kids. Little bastards, all of them. Give them a superpower and they’d all destroy the world in as much time as it takes to say, “I want my Happy Meal now!” It’s a lesson written large and clear in Saturday’s episode of Doctor Who, Fear Her.

END_OF_DOCUMENT_TOKEN_TO_BE_REPLACED

“Note to self: By episode ten, David and Billie will probably be knackered. Real risk of them appearing on top of Welsh parliament building with sniper rifles if I make them do more work. Plus not sure they can be at two places at same time, thanks to filming requirements of episode nine. Must come up with story that doesn’t involve Doctor or Rose. Hmm. How about story like Star Trek’s Lower Decks that focuses on other characters? Or like The Zeppo on Buffy? I love Buffy. I wish I was Buffy.”

From Russell T Davies’s “Production Notes: Doodles in the Margins of Time” © BBC 2007

Love and Monsters was quite a brave episode. You have to admire Russell T Davies for at least trying something new. A story that pretty much doesn’t feature the Doctor or his companions at all? Unheard of! (When was the last time? Yes, you there at the back. Mission to the Unknown, back in the Hartnell days? Well done!)

But does it succeed? Could it have ever succeeded?

END_OF_DOCUMENT_TOKEN_TO_BE_REPLACED

Well, after the Impossible Planet, The Satan Pit was a bit of a disappointment. All that suspenseful creepy set-up, just to have most of the second part consumed by running up and down corridors, scrambling around ventilator shafts and a fortuitous appearance by the TARDIS to save the day? It all felt a bit of a waste. Where was the cunning plan by the Doctor to overcome the enemy? Where were the buckets of evil nastiness that had proved so unsettling the previous week? Where did Billie Piper’s acting talent go? It’s a bigger mystery than the Devil himself.

Basic plot: Rose and the miners escape the planet in a rocket; the Doctor throws himself down a hole, breaks a couple of jars and then rescues the people in the rocket using the TARDIS.

It could have been so much more, given the production team had Satan to work with as a villain, yet it became so conventional. Even the Ood seemed less menacing and more plasticky than last week.

It wasn’t awful, there was never a cringe-worthy moment and the Beast was a fantastic piece of CGI. But it could all have amounted to so much more, given half a chance.

And what was up with David Tennant? You’re not in the theatre again, love. You don’t have to shout every line to the back of the auditorium. You don’t have to compensate for lack of interesting dialogue by bellowing. In short, you are not Brian Blessed.