It’s a bit of a superheroey week this week for Orange Wednesday, thanks mainly to release schedules rather than my superhero fanboyness. Although that’s a factor.

Up for review this week are two DC Extended Universe movies:

Both of those after the jump!

END_OF_DOCUMENT_TOKEN_TO_BE_REPLACED

In the US and UK, monolingualism feels like the default. Speak more than one language? Crazy, particularly if we’re aiming for fluency rather than asking “¿Donde esta la biblioteca?’, ‘Où est la Gare Saint-Lazare, s’il vous plaît?’ or ‘Wie komme ich am besten zum Bahnhof, bitte?’ and hoping that the answer is short, slow and sweet.

Yet, more than half the world is at least bilingual and there are whole continents and sub-continents where being able to speak more than one language is the norm. And there are people who in the US and the UK who are among that number.

Normally, Bradley Cooper is the one everyone points to when they want to be wowed by an American actor speaking a foreign language. After all:

Perhaps more impressive is Ed Norton, who can speak Japanese:

However, point 3 – Bradley Cooper is a man – highlights an important point. It’s usually men who get the credit for this. So today, let’s spare a thought for some actresses who get less credit for bilingualism.

Okay, Charlize Theron is from South Africa, so her ability to speak Afrikaans (or Flemish) isn’t necessarily hugely impressive:

And Sandra Bullock has German family, so her speaking German isn’t necessarily miraculous:

But let’s spare a thought for Texas-born, Spanish family-less Amber Heard, who speaks fluent Spanish and has done entire interviews in Spanish for Aquaman:

It is of course worth noting that Portman has an Erdös-Bacon-Sabbath number of 11, so is clearly a smart cookie in other fields, too. However, that’s not quite as good as either The Wonder Years’ Danica McKellar and Blossom‘s Mayim Bialik, both of whom have the highest EBS number of any actor or actress: 10. Whether they speak anything other than English, though, I don’t know.

Yes, it’s Weekly Wonder Woman – keeping you up to date on pretty much anything involving DC Comics’ premier superheroine, including how badly her latest movie is doing

Oh dear. Poor old DC/Warners. Last week, the signs were looking good for Justice League at the overseas box office. However, the US box office taking this past weekend has been below expectations: $96m, which although pretty good is the lowest ever opening for a DC Extended Universe movie. It also got a ‘40% rotten’ critics score on Rotten Tomatoes and is now projected to lose Warner somewhere between $50m and $100m.

All is not lost, however, since it’s Thanksgiving week in the US, and Justice League did eventually hit its domestic mark after another day’s takings. It’s also done $185m outside the US and has an audience Rotten Tomatoes score of 85%, meaning audiences liked it twice as much as critics did – in fact, they liked it more than Man of Steel, Batman v Superman and Suicide Squad, although not quite as much as Wonder Woman, naturally.

Still, already everyone and their auntie is weighing in on what went wrong. Previously, director Zac Snyder had been universally blamed for all previous failings of DCEU movies. However, a personal tragedy meant that he departed the movie after shooting a big chunk of it, upon which Warner hired Joss Whedon (yes, that one) to do some rewrites and reshoots.

Weirdly, a whole bunch of people are therefore putting Justice League‘s perceived failings down to there being not enough Snyder and too much Whedon. There’s even a petition by fans to have a Snyder cut of the movie that the movie’s own cinematographer is backing. Someone even claims to have a list of all the changes Whedon made. All the hints in Batman v Superman as to the original plot of Justice League are probably out the window – or maybe they’ll turn up in Justice League 2 if that ever happens.

Want to know what I think of Justice League? Well, I’ll tell you after the jump. But first, let’s talk about comics…

As previously mentioned, former Wonder Woman illustrator Liam Sharp is working on the first ever Batman-Wonder Woman title. But we now have some actual details:

It’s a six-issue mini-series called The Brave and the Bold: Batman and Wonder Woman, out on February 21st. One week earlier and people would talk. The series will mix Wonder Woman’s Amazonian mythology with the legends of Irish and Celtic gods. “The story would involve the death of an Irish god, and Wonder Woman would bring in Batman, the world’s greatest detective, to help investigate.”

Sharp said this new story will be a continuation of his Wonder Woman series with [Greg] Rucka, taking place not long after their final issue. He said Wonder Woman and her classic supporting character Steve Trevor are still a couple, but that he was tempted to add a little of the romantic spark that has existed between Batman and Wonder Woman over the years in various adaptations.

“There’s a moment [between Batman and Wonder Woman] in it. It’s more of a nod than anything else,” Sharp said. “I fell very much in love with the Steve and Diana story during the series with Greg. We felt like we gave him a certain richness to his personality that perhaps he’d lacked somewhat previously. There was a sense that the fanbase said this is right and this is how it should be. So I don’t want to spoil that. That’s the [Wonder Woman] that we created and that’s the dynamic that we created, but at the same time there is a [romantic] nod [to Batman].”

Should be fun. And well drawn.

END_OF_DOCUMENT_TOKEN_TO_BE_REPLACED

Apparently, there’s more than one movie featuring Wonder Woman coming out this year. Who knew? As well as Wonder Woman, there’s one called Justice League, too, which is directed by Zac “Dark and Gritty” Snyder.

Unveiled this week was an official site full of Photoshoppable images, as well as several posters, including one of our Diana: 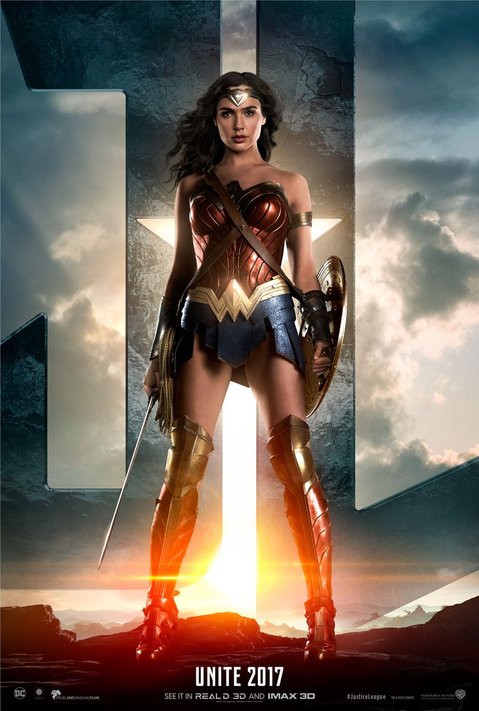 Better still, she features in a new trailer for the movie…

…as do the Amazons, who appear to be fighting some parademons in somewhere dark and gritty…

…as does Amber Heard playing that Mera from Atlantis. You can rewatch the trailer to check. Treat yourself.