Time for a third-episode verdict on TNT’s Leverage then. After a good start, the show has continued to maintain its relatively high standards. Episode two tried to go for a slightly harder edge, with an Iraq veteran being cheated out of his rehabilitation money by government contractors and crooked politicians.

Episode three went with something a little more personal and more interesting, with Christian Kane’s character returning home to Kentucky to deal with a racehorse owner who kills horses for the insurance money. High mark of the overly complicated episode is the introduction of the show’s Professor Moriarty: fellow insurance investigator Mark Sheppard (BSG, The X-Files, Bionic Woman, etc), who’s scheduled to appear in at least five episodes. Sheppard is adept at the cons and investigations as Hutton but is on the right (?) side of the law, and makes an interesting addition to a show that was in slight danger of repetition and losing tension in the long run.

Most of my initial criticisms remain: it’s not very hard hitting, the cons are easy to spot a mile off and there’s a fair bit of duff acting. Add to that Gina Bellman’s less than outstanding attempts at accents, a decreasing amount of the character interplay from the pilot and the fact that most of the cons have relied on something being obviously switched at the last moment. It’s also not especially memorable, so you never really remember the cleverness of the cons or much of the plot in the same way as you do with Ocean’s 11, say.

But it’s still very fun to watch. The cast are all pretty charismatic and there’s an intriguing randomness and weirdness to its sense of humour (one character has a fear of horses because "they murder clowns" and there’s a flashback to Kane being tortured because he wouldn’t reveal the location of a monkey, for example).

Worth watching if you want some diverting, not too heavy entertainment of an evening.

I don’t know if you’ve noticed this, but Tina Fey has been something of a hot property of late. Thanks to her scary impersonation of Sarah Palin (here with Will Ferrell as George Bush), people all over the world are waking up to the fact that despite having been on and written for a recent season of SNL, she is in fact a comedy genius.

Not NBC though, because they’ve waited until the end of October to bring to our screens the latest season of 30 Rock. Set behind the scenes of a fictitious NBC sketch show, it features Tina Fey as the show’s bewildered liberal producer and Alec Baldwin as the interfering conservative executive in charge of Fey’s show, east coast programming and microwave ovens. And it’s easily the best comedy on television at the moment (yes, better than The Office, etc)

Well done, NBC. Would you like to look at your ratings? Scary, aren’t they? Want to start thinking a bit more in future, maybe, about how you could capitalise on events rather than simply staring at them blankly?

Of course, there may have been doubts about the show’s funniness. Would season three be as funny as previous seasons?

Don’t be silly. Of course it would.

END_OF_DOCUMENT_TOKEN_TO_BE_REPLACED 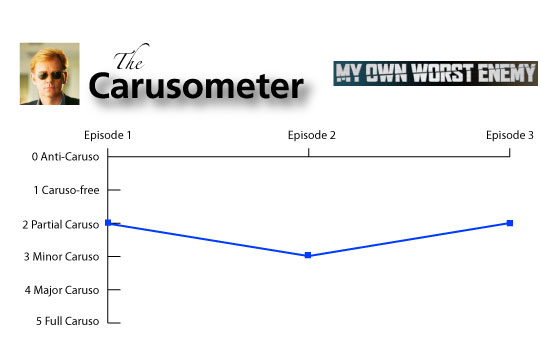 Three episodes into My Own Worst Enemy and it’s clear that this isn’t the car crash we were expecting. Essentially The Bourne Identity crossed with True Lies, it sees Christian Slater finding out he has multiple personality disorder and one of his personalities is a real-life secret agent – which would be nice and exciting if it weren’t for the people trying to kill him and his family.

It all sounds a bit dumb and it is, but the show is better than the set-up suggests. It tries its best to be gritty and to be as adult as possible, given the sci-fi foundation beneath its surface. After initially seeming like it would Slater and his other self working together to stay alive, the title’s come into play and the two Slaters are having interesting little time-shifted battles against each other.

We also have Slater’s spy partner, whose relationship with his wife shows that Slater and the still not well used Mädchen Amick actually have the relatively good end of the sociopathic secret agent-hausfrau relationship spectrum. This is actually quite a poignant sub-plot of spousal neglect that works quite well in context.

The spy stuff’s all a bit uninspiring compared to CBS’s The Unit, but Slater’s good, there’s an interesting series arc developing – finally giving Saffron Burrows something to do – and it’s quite dark, which always gets the thumbs up from me. But it doesn’t yet have that magic ‘something’ necessary to make it a must-see, a theme common to most of the Fall’s new shows. Close, but no cigar.

Predictions
Could well make it to a full season, but unlikely to make it to season two without more oomph.

I’m not even going to bother with a Carusometer for this one. It started off a bit dull, despite having Emilie Ullerup in it, and by the time I got to episode four (since episode one was a two-parter), I couldn’t even bother reaching the end of the episode.

It’s just not very interesting. Nothing remarkable about it at all. Oh well.

Eleventh Hour, yet another remake of a British series, has now managed to notch up three episodes. Unlike Life On Mars, which chose to start with two remake scripts and an original script, Eleventh Hour has gone for one remake and two original, so we can get a firmer idea of what the show’s going to be like.

As predicted, it is indeed shaping up to be the new Doomwatch, although it’s also the new CSI, which is handy, given it’s on CBS. While episode one was less daft and science-fictiony than the UK original script, episode two was pretty much an episode of CSI – and a stupid one at that – with a science label hung on it; episode three, however, was a relatively interesting piece on GM food with overtones similar to the Doomwatch pilot The Plastic Eaters.

Rufus Sewell is a good lead; Marley Shelton can’t really act, but her character’s more useful than Ashley Jensen’s original, offering FBI skills rather than simple "falling over" skills, and she could plausibly do the job, at least. Not really interesting dramatically, yet, but the science in the plots separates it from a standard procedural – just. There needs to be more chemistry between Sewell and Shelton for the show to be of true interest though and they need to steer clear of the science-fiction UK originals as well as the more obvious "who’s the techno crim?" scripts, too.

Predictions
Already booked for a whole season, but needs to make the central format more interesting for it to really appeal.