Another week, more movie heat, this time courtesy of a new trailer for Batman v Superman: the Dawn of Justice. There are two interesting things to note about it, apart from Jessie Eisenberg’s, ahem, unique take on Lex Luthor:

In the comics world, meanwhile, not quite such a storm, but a fun and important week all the same. First up, we have the continuing adventures of Wonder Girl in The Legend of Wonder Woman, as she develops into a young woman versed in the arts of kicking arse and feeding ponies.

And then, we get Wondy teaming up with one of her biggest fans, one ‘Harleen Quinzel’, to take on the worst London crime gang around, solve some very important clothing questions, and finish as all good London-based adventures should, down the pub, in the very first issue of the surprisingly important and clever Harley Quinn’s Little Black Book.

The Legend of Wonder Woman #4
Plot
Quite a brief issue in terms of structure, designed to take us from Diana’s early days as Wonder Girl, learning to be a warrior from Aclippe, to someone about ready to face ‘the dark threat to Themyscira’ she senses as a young woman.

The big life lesson for young Diana is not to judge a book by its cover and to know one’s enemy, attacking them only as a last resort. In this case, the enemy is a ‘mare of Diomedes’, apparently a species of horse that allegedly eats human flesh. (Ish. For those feeling mythological, Diomedes simply fed his mares human flesh. One can assume, though, that this is either a species named after those horses or that he got four of them to keep as pets).

Except, as Diana discovers, they only eat human flesh when they have to. Because it’s Legend of Wonder Woman and female things are good things. Not very inspiring otherwise, is it? 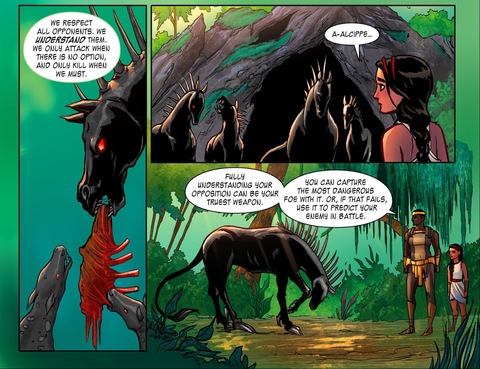 It’s quite a talky piece, with the first quarter or so dedicated to Hippolyta explaining why she’s definitely not worried about Diana to a nearby attendant, the second quarter to Alcippe explaining why she’s narked off with Diana, another quarter of Diana explaining why she shouldn’t be narked off and Alcippe admitting that she’s right, with the final quarter left to people hitting each other with sticks. But its main aim is to be the small print to last issue‘s “War! What is it good for? Absolutely everything!” message, here highlighting it should be the weapon of last resort.

Overall, though, despite being a bit clunky – unsurprising, given it’s younger target audience – it’s a strong, if unchallenging piece.

Harley Quinn’s Little Black Book #1
Plot
Harley Quinn’s one of those DC characters who’s immensely popular with readers, particularly young male ones, yet has almost zero profile outside of the comic book world. Unless you used to watch the Batman: The Animated Series.

The forthcoming Suicide Squad movie might change that, but until then, here’s a brief catch-me-up for those who need it: a squeeky-voiced, Brooklyn-accented, former psychiatrist and lover of the Joker, Dr Harleen Quinzel aka Harley Quinn is a bit challenged in the sanity department, gets easily obsessed by things including people, swings both ways, dresses like a female, sexier version of the Joker, and in the new fun-filled DCYou is trying to turn over a new leaf with her own gang of similarly dressed ‘Harley Quinns’ in her own title.

Now comes Harley Quinn’s Little Black Book, a new bimonthly title designed to capitalise on her popularity by pairing her up with a guest superhero or heroine each month for her to obsess over. And Wondy has the honour of being Harley’s first obsession.

The basic plot of the issue is that a gang of London criminals are trying to abduct Wondy and ransom her. But Harley hears about the scheme, gets herself shipped over to London, where she does her best to stop the gang – by knocking Wondy out then taking her place before the gang can get to her. Of course, nothing goes quite as Harley plans…

As you might expect from a character who’s there largely to get teenage boys excited, the title is slightly exploitative. We have Harley knocking Wondy out then stripping her from her armour…

…Harley discovering that Wonder Woman’s a tad taller and, erm, better developed than she, meaning that Wondy’s armour needs a little bit of help to stay up… 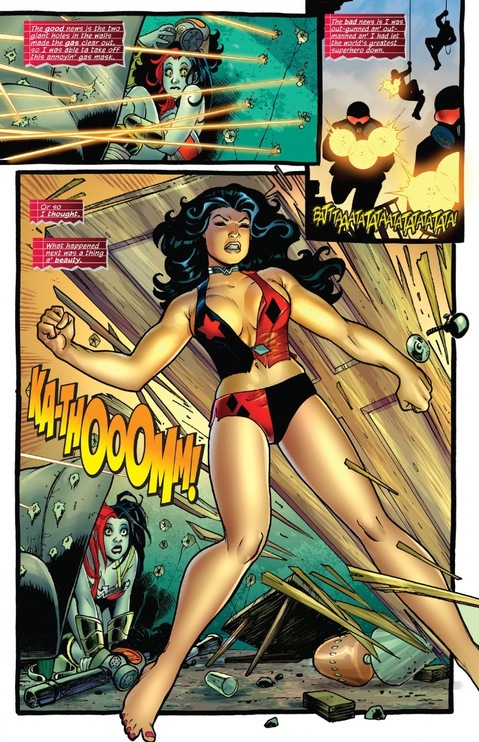 …and, when it’s all over and everyone’s friends, the discovery that Harley was a bit ‘excited’…

But, in keeping with the general tone of Harley as a character, the aim of the title, the new DCYou and the London setting of this team-up, it’s all a bit Carry On rather than properly exploitative in the style of her nu52 debut, say:

Indeed, the comics is genuinely funny. As well as giving us a villain called ‘the Barmy Bugger’ and a properly useless London Legion of Superheroes spouting some of the most deliberately bad slang outside Mary Poppins (or Wonder Woman #44)… 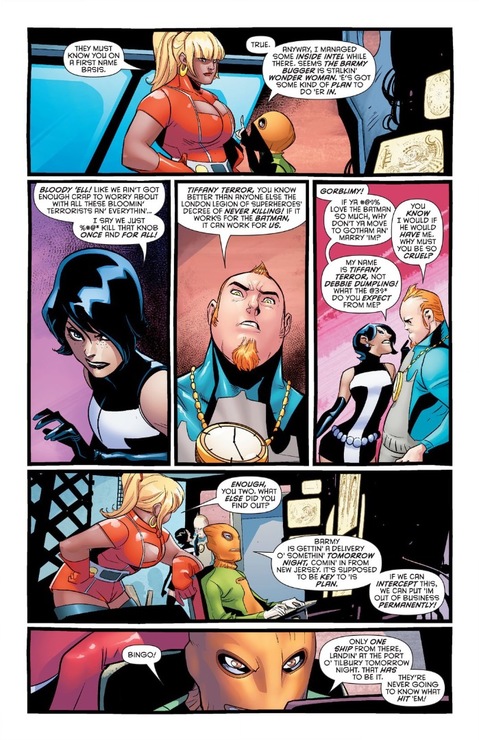 …the comic is full of entertaining innuendo that might well pass over the average teenage American boy’s head, be it Harley’s revelation that she’s been a ‘closet fan’ of Wondy for a long time (yes, she literally has a closet full of memorabilia)…

…through to the new friends’ use of the Lasso of Truth on Harley to answer some very particular questions.

The title does have some other interesting aspects, too. Take another look at Harley’s closet and you’ll see some important items. And not just the teddy bear. Someone appears to have cashed in on Diana’s good name with a ‘Wonder Puffs’ cereal (maybe all the proceeds went to Diana’s favourite charity) and a range of underwear called ‘Wonder Wear’. Diana has also apparently gone on a tour of Australia (‘the Wonder Down Under’).

But on top of that, it appears that despite having worn the same uniform in every title until issue #41, she has secretly also been wearing her Volume 2 and 3 outfits, as well as her Wonder Girl outfit. Things get even more interesting after that, too. It turns out that Harley has been a fan of Wonder Woman ever since she was at High School and was first inspired to shed off her victimhood by Wonder Woman: 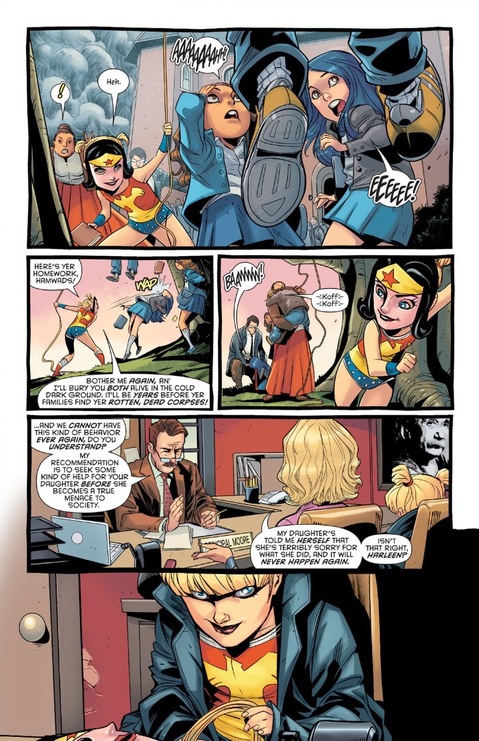 I’m not sure all the dates add up, given Wondy’s still supposed to be in her mid 20s, but can we take this as evidence that nu52 Wonder Woman has had a whole series of adventures (and outfits) we’ve never heard about, there’s some multiverse crossover story with other Wonder Women waiting to be told, or that we simply have an author and artist not really giving a toss about continuity but wanting to emphasis how inspiring Wonder Woman can be?

Given that it’s co-written by Amanda Conner, who both wrote and drew one of the stories for the celebratory Wonder Woman #600, I’m going to go with the final option. And, of course, now it’s all canon. That all happened in the nu52/DCYou.

In common with Conner’s cat-training #600 story, Wondy also gets to talk to cats. Or at least cats to talk to her. 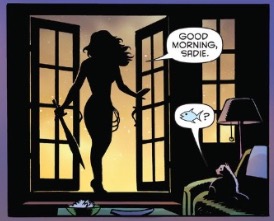 Whether she understands the cat, Volume 2/3 stylee, though, perhaps we’ll never know.

As well as these unexpected depths, there’s something else the issue has that we haven’t seen in quite some time: decent fights involving Wonder Woman. While she may be getting kicked around quite regularly in Wonder Woman and Justice League and kicking ass in a decidely prosaic style in Superman/Wonder Woman, here she’s innovatively kick ass. She’s cutting Minis in two with her super-sharp sword… 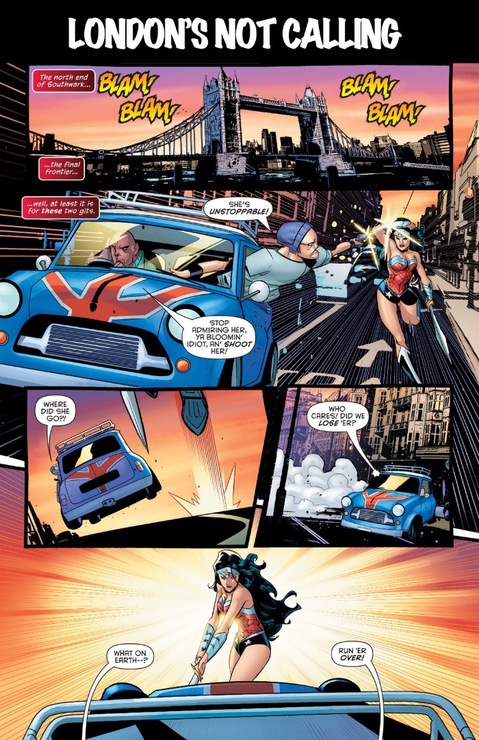 …taking down the baddies and doing ‘bullets and bracelets’… 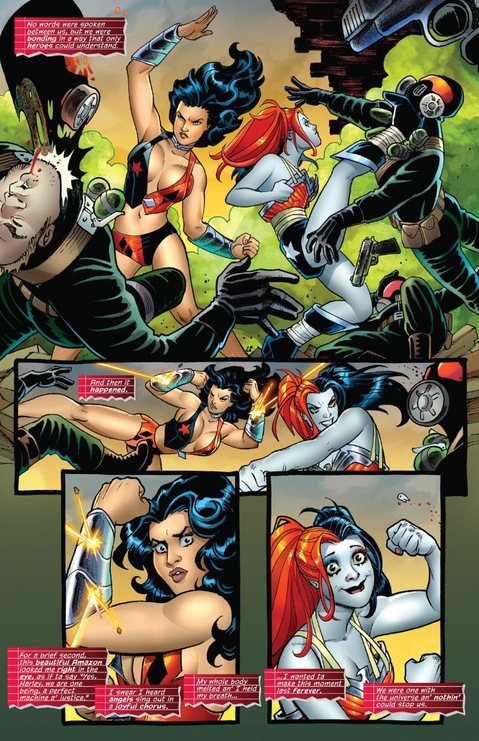 …catching bullets from sniper rifles without even looking…

… and flying around and hurling around villains without a second’s thought.

Couple that with some artwork from Conner and the legion of co-pencillers and inkers that at times is almost a clone of Cliff Chiang, Tony Atkins and Goran Sudzuka’s work on Wonder Woman…

…and despite the comedy, the silliness, the Benny Hill-level humour and the ‘London for Americans’ filter on the artwork*, you end up with something that’s probably the most reverential and important Wonder Woman comic in a long while and certainly the best thing a Wonder Woman fan could spend his or her money on this month.

Which is a surprise to say the least.

Every week (or fortnight), Weekly Wonder Woman keeps you up to date on everything involving DC Comics’ premier superheroine It’s been another slow news week in the realm of things wondrous, so let’s head straight […]