Given that there’d been no change in showrunner between seasons, I wasn’t expecting much of this second season of the show. Yet, actually, despite a somewhat downbeat ending, it’s the season I’ve enjoyed most since that first season of Jessica Jones. Apart from Iron Fist of course – screw you, haters. 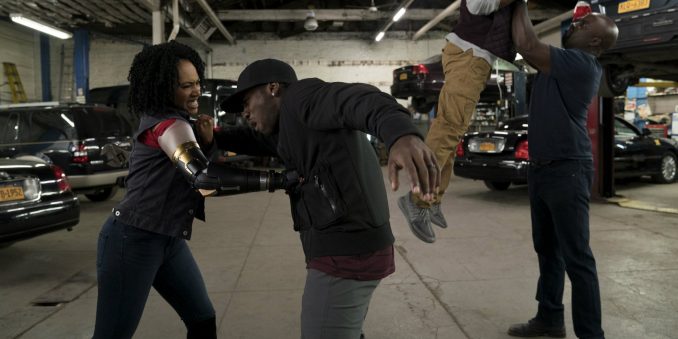 Season two of Luke Cage is a far jauntier, far more fun, far less self-conscious affair than the first season. Most of the same elements are there, but they fit together a lot better, everything’s more polished and it doesn’t feel quite so isolated from the larger Marvel universe.

Events continue more or less where season one left off, although this is clearly a post-Defenders story. Luke is, of course, out of prison and now everyone knows he’s a bulletproof superhero, making him the star of Harlem. Rappers are writing songs about him, he’s getting invited to show off his might against the NFL, Nike want to sponsor him – Luke Cage is big.

Meanwhile, Mariah (Alfre Woodward) is as big within the criminal underworld, thanks in part to the help of her lover-lieutenant ‘Shades’ (Theo Rossi). However, a new man is in New York from Jamaica calling himself ‘Bushmaster’ (Mustafa Shakir) and he has eyes on Harlem for himself. However, not only is his mission more personal than it first appears, he’s as strong and as bulletproof as Luke Cage. Is there room in town for the two of them?

Spoilery talk after the jump. 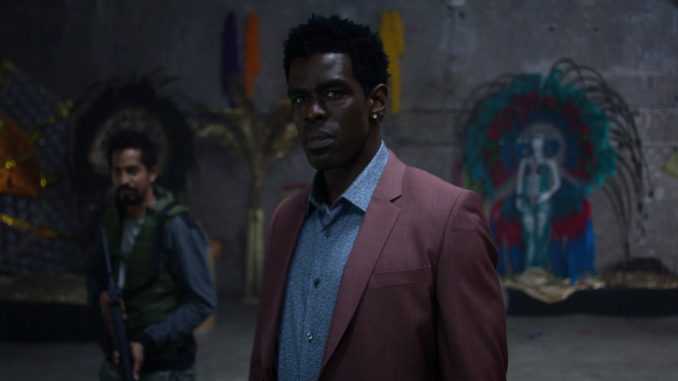 If season one was all about what an upstanding black man should be like, season two is both consciously and unconsciously about what an upstanding American black man should be like – and whether that pressure is too much. Although Bushmaster is supposedly Jamaican (and to both British and Jamaican eyes and ears, that’s a bit of a stretch, despite Shakir’s efforts and even some Jamaican filming), he’s a mish-mash of black non-American tropes: he does voodoo, uses the power of ‘nightshade’ and other plants, and he’s a student of capoeira, none of which are either Jamaican or American. He’s pitted against Luke, the upstanding black American, who fights the American way, is the product of science and who talks American English rather than patois. Luke also plays by the rules, whereas the foreign Bushmaster doesn’t, all of which makes the show a clash of black cultures, with the American way the right, more developed – if frequently guilty of hidden crimes – way of living.

However, that’s too simple an analysis, since the Bushmaster/Cage/Mariah fight is as much about black on black crime. By the final few episodes, everyone is notably tired of the violence, driven either to deplorable lows or just wanting it all to stop. The crimes of previous generations are being visited on the those still alive, which will perpetrate even more violence in later generations unless everyone finds a new way to live.

Here, the show is philosophical, with at least one episode a bottle episode with heroes and villains discussing the necessity of friendship and family, and how there have to be limits on behaviour, even criminal behaviour, or else an eye for an eye leaves everyone bleeding to death. Bushmaster may be out to do bad things, but he’s had far worse things already done to him and he has his own code of ethics – he’s no one-dimensional sociopath. The show also refuses easy solutions, with Luke’s ultimate answer to how to maintain peace in Harlem cutting him off from his friends, who can all see he’s taken the wrong path, and Mariah’s fate determined by people having to take responsibility for previous generations’ misdeeds in order to stop the circle of violence and atone. 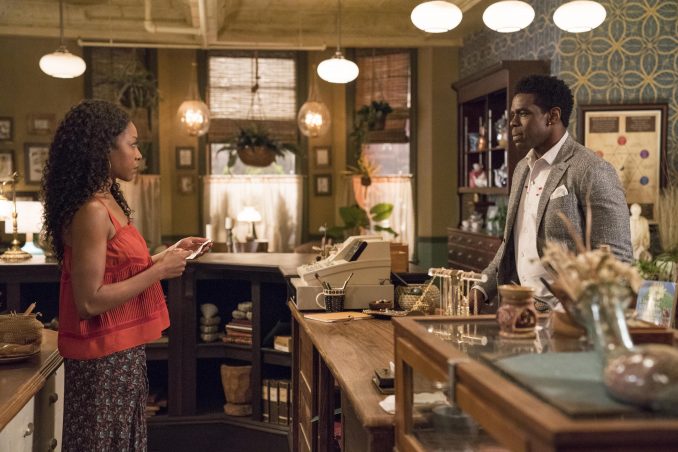 However, that analysis is also flawed – it’s too serious. Season two of Luke Cage is actually pretty fun. As well as numerous cameos from black musicians and celebrities, plenty of jokes and a stonkingly good soundtrack, most of what was wrong with the first season of the show has been fixed.

We have some fight sequences that are more than just hitting. Even the ones that are just hitting are quite fun. Worries about ‘Judas bullets’ disappear within about the first episode, as Luke’s skin appears to have been upgraded since last he was hit by one, making it a lot easier for the show to just get on with it story, too. Even the vengeance-crazed Bushmaster has his moments, most of them involving frequent references to Usain Bolt.

Although Jessica Jones – Luke’s comic book wife – is a no-show, this is a far more crossover-tastic affair than the previous season, too. We have Foggy Nelson (Elden Henson) from Daredevil and Karen Page gets almost as many hat-tips as the Incredible Hulk does. Colleen Wing from Iron Fist gets to show up to kick some ass and give advice. And then, of course, we have the Immortal Iron Fist, himself, Danny Rand. 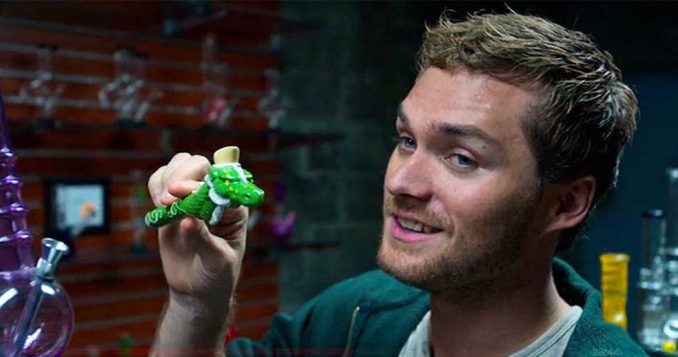 ‘The Immortal Iron Tool’ no longer

He only appears in the tenth episode, but ‘Power Man’s comic book partner in Heroes for Hire (a phrase frequently used throughout the season, with various people trying to hire Luke at various points) makes his presence felt throughout, whether it’s a gift for Misty Knight that helps her come to terms with her disability, or the loan of a hideout.

When he does show up, he’s not the Iron Fist you may have come to know and loathe (screw you, haters). This is a different, rebooted Danny Rand – so rebooted you feel that Netflix mandated he be included in Luke Cage so that everyone actually gives season two of Iron Fist a chance when it comes out.

Here, he’s no longer the petulant, childish, humourless dick that his show survived rather than was founded on, but is instead a cross between zen master, helpful best friend, wise benefactor, teller of tall stories, guide to the richer parts of New York and grade A offensive weapon when the fighting starts. He even wears one of Luke Cage’s branded sweatshirt. And when he fights, he gets to do kung fu, rather than the Japanese hodgepodge of things he had to work with in Iron Fist. 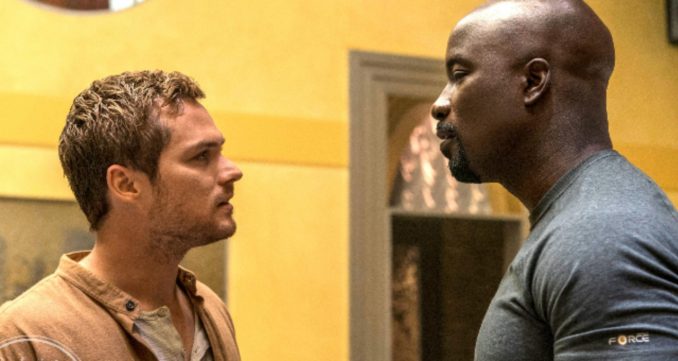 If there’s one big flaw with the second season of Luke Cage, paradoxically it’s Luke Cage. He doesn’t seem himself. Sometimes he’s brutal. He spends a lot of time chatting with his mean preacher dad (Reg E Cathey). He’s frequently ungrateful and a bit of a dick to Claire and his mates. As mentioned, his ultimate solution to all of Harlem’s problems is… odd and I’m not convinced the character we’ve seen so far would choose it. For a man who spent a season being as upstanding as it’s possible to be, this appears to be almost absolute corruption, given how far he falls. Which is a shame, given how much of a role model he should have been.

Luke Colter, however, is having a great time and has really made the role his own. Simone Missick gets to have as much fun, particularly once she gets her new arm, and Alfre Woodward gets to luxuriate as a female Kingpin. Theo Rossi’s Shades is a surprisingly subtle performance, and the supporting cast have much to offer, too. It’s a shame Rosario Dawson doesn’t get to hang around much, but maybe she’s getting tired of patching up superheroes.

All in all, though, despite that strange left turn at the end, season two is hugely enjoyable and its episodes do more or less fly by, which is more than can be said for most of the other Netflix Marvel shows. In fact, it’s so good, you might end up watching the second season of Iron Fist. Although maybe not four times like me.

PS If you want some fun, try watching it with the subtitles on, as they actually translate the Jamaican patois into American English. There were also some jokes that make more sense written down!

What have you been watching? Including Return of the Mac, The Good Fight, Imposters and Doctor Who

A mini-review of Return of the Mac. Plus reviews of 3/4/17-17/4/17’s episodes of The Americans, DC’s Legends of Tomorrow, Doctor Who, The Good Fight, Imposters and The Magicians.
[…]

A review of the first episode of The CW’s In the Dark, starring Perry Mattfeld, Kathleen York, Rich Sommer and Derek Webster […]