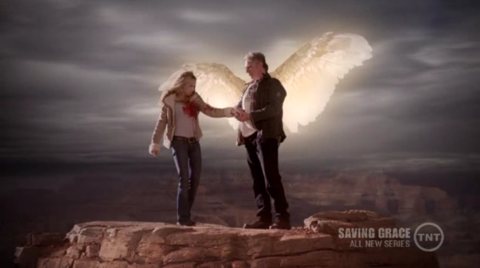 I watch a lot of old tatt for you guys. I really do. Normally, I manage to sit through it all. Sometimes I can make it as far as five episodes into a piece of old rubbish before decreeing its awfulness, just to save you all from having to do the same.

The last time I couldn’t make it through an entire episode of something was Angela’s Eyes, almost exactly a year ago. I lasted less than a minute with that one.

I lasted 16 minutes of Saving Grace before I decided enough was enough and I couldn’t take any more. What was wrong with it?

It was offensive. It was really, really offensive.

Plot (handed down on stone tablets from the TNT web site)

Academy Award®-winning actress Holly Hunter (The Piano) takes on the role of a cynical police detective facing a personal crisis of divine proportions in the provocative new drama series SAVING GRACE, premiering this July on TNT.

In her television series debut, Hunter stars as Grace Hanadarko, a tormented, fast-living Oklahoma City police detective who, despite being at the top of her field, takes self-destruction to new heights. After seeing tremendous tragedy in her life, both professionally and personally, Grace lives life hard and fast. She drinks too much, sleeps with the wrong men and defies authority. Grace has a tender side with her 22 nieces and nephews, but that is a side that most of the world doesn’t get to see. It all catches up with her one night when, as she’s driving too fast after too many drinks, she hits a man who is walking along the road. In an uncharacteristic moment, Grace asks for help, and she gets it – in the form an unconventional angel named Earl (Leon Rippy, Deadwood). Earl tells Grace that she is in trouble and running out of chances, but he wants to help lead her back to the right path. The journey, for both of them, will not be an easy one.

Creator Nancy Miller says of Hunter, “Holly can break your heart and make you laugh in the same moment. She’s astonishing. Grace is a complex character, deeply troubled but searching for the good, with a heart full of love and pain, and a surprising tenderness when you least expect it.”

In addition to Rippy, the cast also includes Kenneth Johnson (The Shield) as Grace’s partner; Gregory Norman Cruz (Criminal Minds) as detective Bobby Stillwater; Bailey Chase (Las Vegas) as detective Butch Ada; Bokeem Woodbine (The Big Hit) as a death row inmate who figures into Grace’s struggle and Laura San Giacomo (Just Shoot Me) as the criminalist who, despite having strong religious beliefs, is the only one in Grace’s life who does not judge her.

Let’s start from the outset with a few notes.

But Saving Grace is having none of that. As an atheist, apparently I must be an adulterous, chain-smoking, drug-taking, drink-driving, law-breaking, evil bigot who takes every possible opportunity to knock Christians for their beliefs.

Maybe I’m just being over-sensitive here (I probably am), but it just riled me. She couldn’t be a lapsed Christian, couldn’t be a Christian who had lost her way and had started to gather sticks on the Sabbath or something*. No, she had to be an atheist – the only one in the show. Bah!

The God-angle aside, it’s not a great show, by the looks of its first 16 minutes. Holly Hunter is one of those “ballsy” female cops – naturally, the only one who spends all her time punching sexual harassers, as you do. She has one of those police captains who are there purely for her to argue with and who force her to apologise to the men who sexually harass her. There’s some God-awful dialogue and it’s impossible to take Hunter seriously since Sarah Paulson’s impression of her on Studio 60. although there’s nothing really wrong with her performance (although she can’t really play drunk very well).

So my general advice is to steer clear of it for all sorts of reasons. Maybe it’ll be your cup of tea though. It really just wasn’t mine, so you’ll have to try it for yourself to be sure.

Here’s a YouTube trailer, although it’s not very good. You’ll notice that God stops her cell phone from working when she wants to call for an ambulance to save a man’s life. Bad God – or at least bad scriptwriting. Tsk, tsk.

PS “Laura San Giacomo (Just Shoot Me) as the criminalist who, despite having strong religious beliefs, is the only one in Grace’s life who does not judge her.” How’s that? Because she has strong religious beliefs, she’s the one expected to judge Grace? What about “Judge not, that ye be not judged”? Something odd there, even on the show’s own terms. It’s probably the God-less marketing department’s fault though. Although they seem to regard defying authority as a sin, as well.

* Oops. Punishment for gathering sticks on the Sabbath: death by stoning. Maybe something less terrible than that then