It may not be the end of the month any more, but that’s not enough to stop Diana from popping up in various titles last week. As well as the usual appearances by Elseworld Dianas in Injustice: Gods Among Us – Year 5 and The Legend of Wonder Woman, we saw the return of TV Diana (and assorted comic book enemies) in Wonder Woman ’77.

And for those of you who hadn’t realised that the ‘Savage Dawn’ Vandal Savage crossover story is still ongoing, be surprised, because it’s continuing in Action Comics #49: Supes is out of chemo, he’s got a shiny new set of powers, and it turns out that when you give the boy from Krypton his little green pill to help him get over his impotence, he stops feeling sorry for himself and remembers he’s got a girlfriend.

Action Comics #49
Plot
His body now full of shiny kryptonite energy, suprisingly enough, Superman’s got a whole new lease of life and an alternate set of super powers. But at least he can fly again, something Diana spots immediately.

And my, doesn’t Supes seem perky? 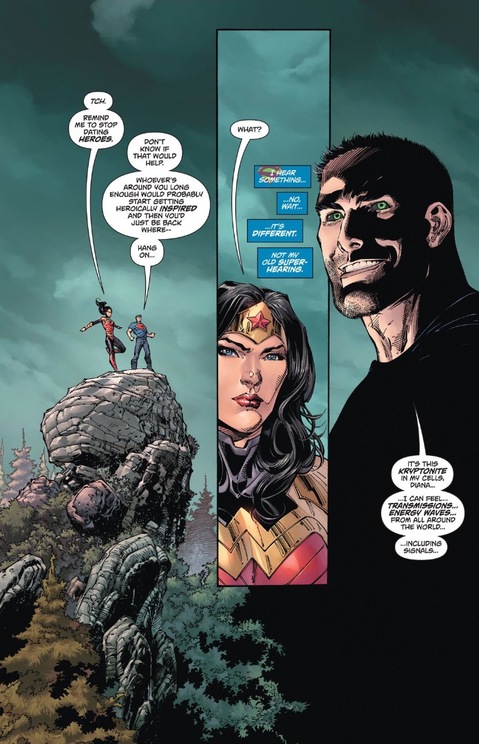 He even gives her a little wink as he’s beating up one of Vandal Savage’s kids.

But then Vandal Savages shoots Jupiter and steals the Fortress of Solitude. As you do.

Is it any good?
Well, it’s big and fun and exciting. It’s absolute insane, too, but what the hell – it’s a proper comic’s comic.

On the plus side, too, we have the continuing rekindling of the Superman-Wonder Woman relationship, following Superman-Wonder Woman #25, which is being handled relatively well. True, the whole arc’s made Clark “Superman” Kent look a wee bit less than manly – what’s that, Supes? You’ve lost your powers, feel less in control, and have to rely on your girlfriend to look after you? Best dump her, then!

Still, fingers crossed, maybe a return to normality once the whole Vandal Savage arc. Also of note is that this is a Vandal Savage who can shoot Jupiter, 2010-style, and steal the Fortress of Solitude – see what I mean about DC’s Legends of Tomorrow maybe have too small a budget?

Injustice: Gods Among Us – Year Five #7
Plot
Everyone underpowered takes a green pill and there’s a fight. Batman and Superman punch each other a bit. Wonder Woman beats up Batwoman and Harley Quinn. The under-powered run away.

Is it any good?
It’s just punchy fighty stuff. This time, it’s Wonder Woman’s turn to win. They take it in turns, you know?

The Legend of Wonder Woman #13
Plot
Diana heads off to Boston with Etta Candy and the other sorority girls, to find out more about Man’s World, as well as the Duke of Deception. Along the way, she bumps into none other than Perry White, who’s editing a very different kind of newspaper than normal.

Is it any good?
A bit of a filler issue, overweighed with dialogue, more background story for Etta and obvious commentary on 1944’s society. But even if Diana’s still to really get a personality, Etta’s engaging enough for the two of them, and we get a hint that a god (or even one of the Endless) is involved with the Duke of Deception, thanks to the use of the word Olethros (one of the children of Strife in myth). Fabulous artwork, as always, too.

Wonder Woman ’77 #14
Plot
Batman villain Clayface is having problems so goes to the doctor. There he meets Cheetah, who tells him about Wonder Woman’s magic clay.

So Clayface stows on board the Invisible Jet when Wondy returns to Paradise Island. After a crash landing, he reaches the beach and the island’s magic clay. Now Wondy’s got problems. 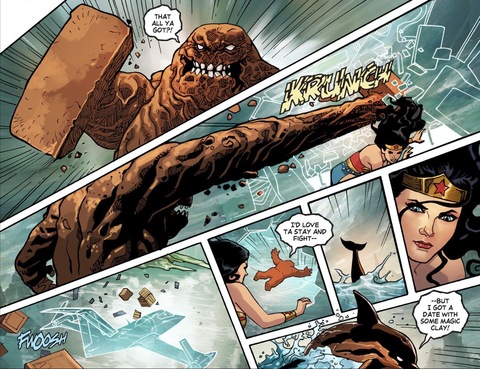 Is it any good?
As I’ve remarked before, essentially Wonder Woman ’77 is an attempt to do all old school comic book Wonder Woman continuities (Volumes 1-3) under a TV-series roof, with Lynda Carter playing Wonder Woman still. We’ve already seen the very different Volume 2 Cheetah incorporated into the general Volume 1 ambience of the title, and now we have two more bits of comic book continuity trekking the same, not especially original path.

Here, we have Clayface, the Batman villain made of clay, and the Volumes 1-3 continuity idea that the Amazons are made from clay. That wasn’t never part of the TV show, so clearly the TV show had to be made to conform.

Apart from that, it’s an enjoyable, not especially serious bit of silliness, a bit more Sensation Comics than the camp yet po-paced TV show. It also doesn’t feel that original. Read Volume 2, issues #160-161? No. If you had, you’d remember the cover:

Anyway, the plots are so similar, you’ll start spotting head nods, perhaps where there are none. Why does Clayface get the lowdown from Cheetah? Because that’s whom he impersonates in #160:

So, as always with Wonder Woman ’77, nothing new under the sun, just old continuity reheated and reserved. But it doesn’t take itself that seriously, given it has Wonder Woman in her TV swimsuit, so you shouldn’t either.

A review of Superman/Wonder Woman #2

The news for Thursday 10th February 2011