The Daily News will return on Wednesday

He may be the entirely fictional president of House of Cards, but Frank Underwood (aka Kevin Spacey) just unveiled a portrait of himself by Jonathan Yeo in the US National Portrait Gallery. Alan Greenspan and members of the Obama White House even turned out for the event. Which is odd.

President Underwood unveils his official portrait, as all good presidents do #HouseofCards pic.twitter.com/qciro9TWBO

It’s been a busy few week for Wonder Woman, both in movies and comics. Not a million miles from where I am now, filming for the Wonder Woman movie closed down Trafalgar Square for a few hours to celebrate Armistice Day. As well as Gal Gadot as our Wondy, the observant will notice The Office‘s Lucy Davis was in attendance, too, looking suspiciously like she might be playing a British, World War I-era Etta Candy. Or should that be Etta Sweets?

Meanwhile, on tele or the Internet or Internet-tele – however you want to describe Hulu, since it reckons its 11.22.63 has been ‘developed for television’ – a 1960s era Wonder Woman comic got pride of place in the middle of the action. If you can describe ‘that scene in the diner with the kid and the big collection of comics’ as ‘the action’. 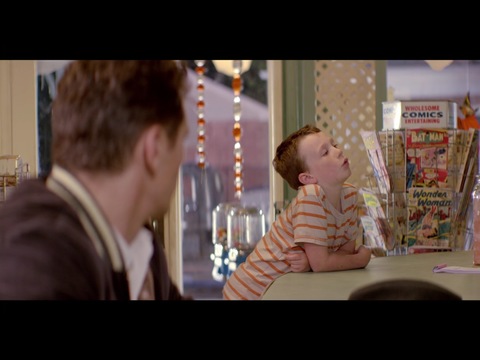 We also got further news about DC’s forthcoming Rebirth reboot/twist/reimagining/holistic encapsulation/whatevs. Lots of titles are going to be reset back to #1 as part of Rebirth, including Wonder Woman, and various titles are also going to go bi-weekly, including Wonder Woman. Taking over from writing duties on that will be Marguerite Bennett, who’s currently writing DC Comics: Bombshells, with rumours that the title is going to be a bit more in the style of George Perez when she does so.

However, there’ll be sniffles aplenty: Superman-Wonder Woman is for the chop. That’s going to be replaced by Trinity, which will feature Batman as well. I’ll let you think about that particular ménage à trois for a bit.

And to top all of that, while Donna Troy kept on having flashbacks to when she was a Teen Titan in Titan Hunt #5 (apparently, a big part of Rebirth is everyone remembering things they used to be back in old continuities), we had appearances by Diana in Wonder Woman #49, DC Comics: Bombshells #31, Sinestro #20, and The Legend of Wonder Woman #15, as well as a brief cameo in Injustice: Gods Among Us: Year Five #9. All that after the jump.

But lastly, just a warning that as I’m away next Monday, there’ll be no Weekly Wonder Woman next week. Kind of ruins the name that, doesn’t it? Soz.