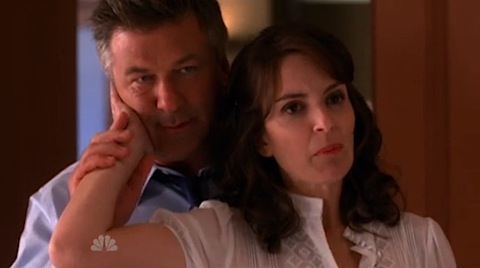 I don’t know if you’ve noticed this, but Tina Fey has been something of a hot property of late. Thanks to her scary impersonation of Sarah Palin (here with Will Ferrell as George Bush), people all over the world are waking up to the fact that despite having been on and written for a recent season of SNL, she is in fact a comedy genius.

Not NBC though, because they’ve waited until the end of October to bring to our screens the latest season of 30 Rock. Set behind the scenes of a fictitious NBC sketch show, it features Tina Fey as the show’s bewildered liberal producer and Alec Baldwin as the interfering conservative executive in charge of Fey’s show, east coast programming and microwave ovens. And it’s easily the best comedy on television at the moment (yes, better than The Office, etc)

Well done, NBC. Would you like to look at your ratings? Scary, aren’t they? Want to start thinking a bit more in future, maybe, about how you could capitalise on events rather than simply staring at them blankly?

Of course, there may have been doubts about the show’s funniness. Would season three be as funny as previous seasons?

Don’t be silly. Of course it would.

This first episode suffers a little bit from ‘returning series’ disease, it must be admitted. That is, having set up all sorts of plot manoeuvrings last season, the show has to spend a good chunk of the first episode smoothing everything into place ready for the rest of the season.

Truth be told, ongoing plot is where 30 Rock falls down – it’s much better when the show deals with stand-alone ideas, rather than having to delve into near-drama.

Fortunately, though, Tina Fey saves the day, even while Alec Baldwin appears to be having an off one. Spending most of the episode with the almost equally good Will & Grace‘s Megan Mullally, she manages to keep things on a comedy high, even while Alec Baldwin sleepwalks through the episode (although to be fair, she gets most of the good lines, while the rest of the cast have more of a struggle on their hands). Recurring guest Will Arnett is equally entertaining as the NBC/GE CEO.

It’s not the best 30 Rock episode ever made, but it’s certainly the best season-opener and raises more than a few belly laughs. New viewers will need a little explanation about what’s going on, although not much, while returning viewers will just be glad it’s back at last.

Here’s a YouTube promo featuring some of the guest stars coming this season (Steve Martin, Oprah Winfrey, Jennifer Aniston and yes, Megan Mullally) and a brief interview with Tina Fey about 30 Rock.

What did you watch last week? Including The Almighty Johnsons, Dirk Gently, Shameless, The Mechanic and The Thin Man

What I watched on TV last week, including

The news for Thursday 4th September 2008

What have you been watching? Including The Royals, Unbreakable Kimmy Schmidt, Community, The Flash and 19-2