Like most right-thinking people, I hate Rupert Murdoch. Being a Sky customer for 15 years – through necessity, rather than choice – has therefore been something of a vexing experience. We didn’t want to give money to Rupert Murdoch but… we did. Things obviously got better last year when News International sold all its share in Sky, but there’s still that lingering “Grrr” of annoyance at the thought of supporting Sky.

What’s equally annoying is that Sky is responsible for some of the better European TV out there. As well as all the Sky Atlantic originals we’ve had in the UK, we’ve also recently had both Babylon Berlin and Das Boot from Sky Deutschland, and from Sky Italy we’ve had the likes of 1992 and now Il Miracolo. The last of these isn’t quite in the same league as the rest, but it’s clear that we’re all going to have to get used to the idea of a benevolent Sky god, rather than Rupert Murdoch. 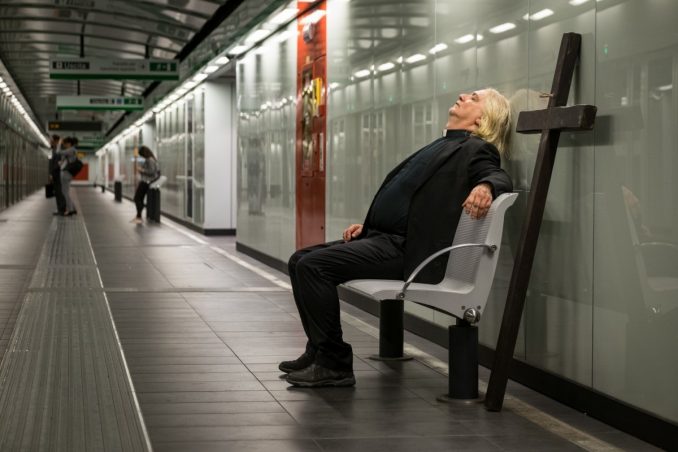 The Miracle (to give it its English name) starts off at a somewhat different level from the rest of the show – with an almost literal blood bath. Police raid a mafia boss’ home but when they find him the basement, he – and most of the basement – are covered in bucketloads of blood.

But there are no bodies.

Meanwhile, Italy’s prime minister (Guido Caprino) is having a hard time of it. There’s a referendum on leaving the EU due to take place in just a few days. Meanwhile, his wife (Elena Lietti) is having random sex at parties with ugly blokes and his kids are just humming. No, really, they’ve got a nanny and every time he passes their bedroom, they’re praying – and usually humming – with her.

Then the police tell him they have a very particular concern. They show Caprino what they found in the mafia’s boss basement – a plastic statue of the Virgin Mary. Thing is this statue is crying blood. They’ve tested it and it’s definitely a man’s blood. And despite being attached to nothing, the statue is crying blood at the rate of nine litres an hour, every hour. They’ve even had to stick it in an empty swimming pool with a bucket under it to catch all of it.

Is this a miracle? If it is, what does it mean and what does God have up His sleeves? And more importantly, what should Caprino do with the information – tell the world and risk riots or keep it to himself? And can he even keep it to himself or will the news leak anyway?

Episode one concludes with Caprino’s seeming acceptance that he’s witnessing a miracle. Episode two then… introduces us to a new storyline featuring a slightly odd teenage boy who might have murdered (after sexually assaulting) a teenage girl and a medical researcher who decides to borrow some of the blood in the hope of restoring her grandmother to health. Caprino is mostly left grimacing the whole time, while Lietti is getting put out by the nanny.

Meanwhile, the miracle itself is seemingly unexplored and unexplained. Which sounds bad, but it’s clear that ‘the miracle’ isn’t just the statue crying blood. There’s more going on, including the dead coming back to life. And did that teenage boy really kill that girl – there was something odd going on in the woods before she disappeared…

That makes The Miracle a bit more engrossing than if it had simply been that one single miracle. But it also means that two episodes is just the beginning of the story and you’ll have to stick with it to see if there’s more to it.

The show has issues. Obviously, it’s Italian so Catholicism is one of its main targets, particularly dodgy, almost comically dodgy priests. But there’s also the suggestion that all these people we’ve met are potentially bad and the miracle might will show them the error of their ways.

It’s also got an odd attitude to women. As well as the first lady being interested in a bit of rough sex with random ugly blokes who seduce her with lines like “I knew you were a slut”, episode two gives us one of Ragno’s parishioners, who’s dubious about his African charity work. After lambasting him publicly then accusing him of being a conman, she’s willing to drive by herself with him back to his apartment, upon which he tries to rape her. When she make a weak effort to stop him, he tells her to go. And she seems a bit in two minds about the whole thing. She’s certainly not sprinting for the door. It’s… odd.

But with further revelations to come and episode two giving us more miracles and the promise of more to come, The Miracle does at least have a pretty promising start. Issues to one side, there’s a decent cast and some Big Thoughts for the show to handle.

How much it’ll actually end up handling – and how well – I’ll have to stick with it to see. But at the very least, it’s a lot more fun than The Leftovers.

In Germany: Aired on Sky Deutschland in 2018 In the UK: Wednesdays, 9pm, Sky Atlantic Das Boot isn’t the sequel you’ve been expecting. Okay, you probably weren’t expecting a sequel to the 1981 German cinema […]

TMINE reviews: the latest episodes of Condor, Das Boot, Doom Patrol, Stargirl and The Twilight Zone, as well as Retrograde […]

It’s that moment you’ve all been waiting for: it’s the TMINE Top N programmes of 2019!