I was aiming for Monday, I honestly was, but here we are again on Wonder Woman Wednesday thanks to tele and work – you know, my usual litany of excuses. Anyway, usual catch-up rules because of my August holiday break: I’ll update you on what’s been happening in all the issues I missed, but only with the titles that were out last week. Also, no mentioning of today’s new releases because spoilers.

That means that this week, it’s a recap of all that’s been going on in Justice League (Rebirth) #2-5, as well as a look at new title Trinity #1. Well, Trinity (Rebirth) #1 technically, but since there hasn’t been a Trinity title in ages and ages, we’ll just gloss over that wrinkle.

All that after the break, but I should probably mention that our Diana also needed a helping hand from Superman last week in Superman #7. She didn’t ask and she wasn’t the only one, but helped he did.

Turns out that Paris thing was a ruse of Greg Rucka, unless Diana was back in London to pick up her things or something.

Trinity #1
Plot
Pre-Flashpoint Lois Lane invites Wonder Woman and Batman round for tea so they can have a chat with pre-Flashpoint Superman about super-heroing.

Is it any good?
If you believe Lois Lane is the centre of the comics universe, it’s fine. If not, it’s enjoyable and occasionally intriguing fluff that’s not going anywhere exciting yet.

Cast your minds back to the nu52 and one of the best of the DC comics around was Superman/Wonder Woman. Or at least it was when Charles Soule was writing it. Under his auspices, the eponymous superheroic lovers fought all manner of important adversaries while learning more about each other and exploring their relationship.

Then Marvel signed Soule to an exclusive contract and off he popped, leaving Superman/Wonder Woman to the considerably less talented clutches of DC stalwart Peter Tomasi, who turned the title into a standard superhero slugfest that haemorrhaged readers.

For everyone else – ‘the Trinity’ is the semi-official name given by DC to their big three characters: Superman, Batman and Wonder Woman. So important does this triad loom in the psyches of DC writers that Brian Azzarello’s change of Wonder Woman’s origins was partly inspired by his not being able to come up with a simple third label in the Trinity for Wonder Woman (“the alien, the human and the… goddess? Aha!”).

There have been several previous titles called Trinity featuring the DC Trinity, including the pretty dreadful Matt Wagner “first meeting” Trinity, but these have all been limited series, rather than ongoing titles, so this Rebirth title is something of a first. But to be honest, that’s really its only distinction so far.

For those who haven’t been following the ongoing storyline, every since Convergence it’s been shown that the pre-Flashpoint Superman and family didn’t disappear into the realm of graphic novels past and have actually been living on the nu52 Earth for the past 10 years, keeping themselves to themselves. It didn’t matter how much the Earth was in peril, millions of people being slaughtered, etc, etc – they all just assumed the nu52 Justice League had things handled and they could keep themselves to themselves so no one would know they existed. Classy, hey?

But with the death of nu52 Superman and the world in need of a replacement, for what seems like about two months and across 27 issues of Superman, Action Comics, Justice League et al, pre-Flashpoint Superman has been contemplating returning to his old day job. The big question for the other superheroes, now they know about him, is whether they can trust this big cowardly quitter the way they did nu52 Superman.

Trinity #1 is the continuation of that storyline. Rather than nu52 Batman and Wonder Woman getting to know new/old Superman like adults – getting his mobile number, sending him an email, maybe friending him on Facebook or something – they’ve apparently just been waiting for him to show up every time they needed him. Because reasons.

What’s been needed to solve this awkward social problem is, of course, a woman. But no ordinary woman – Superwoman. Sorry, Lois Lane. No, actually Lois Lane is Superwoman, now I think about it, but I think that’s the nu52 Lois Lane.

No, pre-Flashpoint Lois Lane is the non-super-powered Superwoman needed for this. Now she’s a housewife, rather than a high-powered journalist, I imagine she invites people round for tea a lot more often than she used to, and that is indeed what she does, inviting both Batman and Wonder Woman round to sit down and break bread with her hubbie to get to the heart of the matter.

I say break bread but Diana brings a wild boar.

The observant will notice that Diana suddenly has an invisible jet again, one capable of VTOL. Where’d she get that from? No idea. That’s a new one by me. Maybe Greg Rucka will explain it at some point, given he’s already introduced an invisible jet at least.

Diana changes into evening wear but that’s not enough to prevent Superman Jr’s X-ray vision determining who’s behind the door when the guests show up and accidentally letting loose his heat vision in surprise. 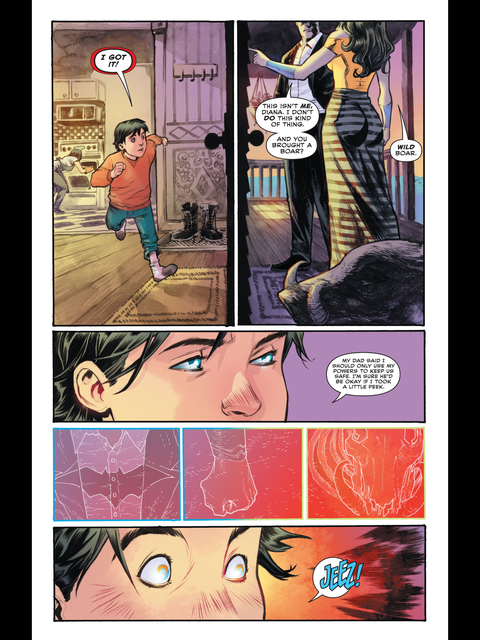 Diana at least is fast enough to avoid being zapped. Batman? Not so much.

Over tea, they chat about their different lost friends, Superman recalling his Batman, and Bruce offering quite a nice eulogy to the nu52 Superman, a fellow orphan whom he trusted absolutely. 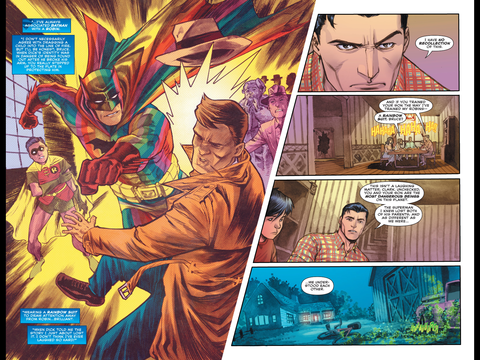 The observant among you will notice Diana looking a bit sadly at Lois and Clark holding hands – and it’s not something Lois missed either. Time for a woman to woman talk – despite basically having the same conversation with Lois she’s already had with her in Action Comics (more on that next week), Diana has to reassure her again that she’s not after her Superman because he’s not the same man. She does, however, need Lois’s help as a friend in ‘finding herself’, because of all the things going down with Cheetah and her own life over in Wonder Woman (more on that next week, too). 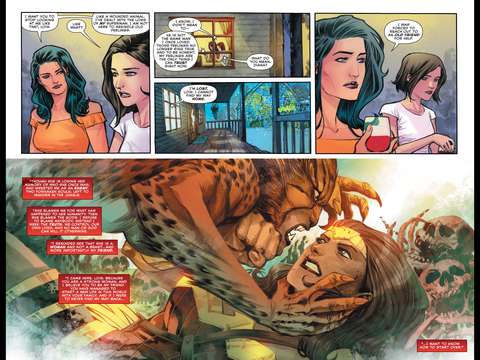 All of that social skilling by Lois appears to pay off because before you know it, Bruce and Clark are bonding over fatherhood and Diana and Lois are gal pals.

So all jolly good fun, if partly repetitive of what’s already transpired elsewhere in the DC Universe. It’s all a lot lighter in tone than certain titles used to be, with jokes of sorts (although Soule’s Superman/Wonder Woman was as light but had more import) and the references to past continuity are delightful (they nearly got to the Batman of Zur-En-Arrh but not quite).

Diana’s loss isn’t forgotten either and we have potential new revelations about the direction her character is going to take in Rebirth. It’s also notable that unlike the nu52, everything is properly synchronised, with the storyline in Wonder Woman being acknowledged in Trinity. The art’s also fun, more in keeping with Cliff Chiang’s style than Brian Finch’s, for example.

However… did Lois really need to be the one who organised the meet up? Would Diana really have brought a wild boar to a meal after 10 years’ of experience of social occasions in Man’s World? Is the invisible jet a thing now or a continuity cock-up? Why is that final panel subtitled ‘rivals to sisters’ – when have Lois and Diana ever been rivals, or is old Supes flattering himself?

So a reasonable start, but one with a slightly brusquer Diana than we’re used to these days. There are also no real clues as to what the title will be like going forward, although something a bit more character-oriented and emotional than a slugfest would be my best guess. Let’s see where it takes us for now, anyway,

Justice League (Rebirth) #2-5
With the new bi-weekly schedule, it’s not surprising that the Rebirth version of Justice League has managed to crank out another four issues since we last looked at it. Indeed, it’s managed to get through its entire story in that short space of time.

Writer Brian Hitch says that Justice League stories should be big, amazing, world-shattering things – otherwise, why bother with the team-up? – and this first story is almost universe-shattering. Somewhat similar to his nu52 Justice League of America run, which oddly still has an issue or so to go (Comixology reckons 2nd November for the next issue), the story sees strange singing giants arising composed of enslaved people, their song potentially able to destroy the world or perhaps even the universe:

Problematically for the League, as well as taking over the minds of numerous humans, the giants are powered using the same energies as some of the League’s members, including the Speed Force and the Green Lanterns’ willpower. The only one seemingly immune is Diana, but she spends a good two of issues stuck inside the giants having a chat with them:

The giants are dispelled after pre-Flashpoint Superman is convinced by Batman and Lois Lane to come out of retirement to drill down to the Earth’s core and knackered three weird things that seem to be running the giants. Oddly, though, the whole thing ends inconclusively – there’s never a definitive answer as to what they were really up to, what would have happened if they’d finished their song and so on.

On top of that, just as Diana’s conversation with the giants is coming to an end, they get a bit cryptic: 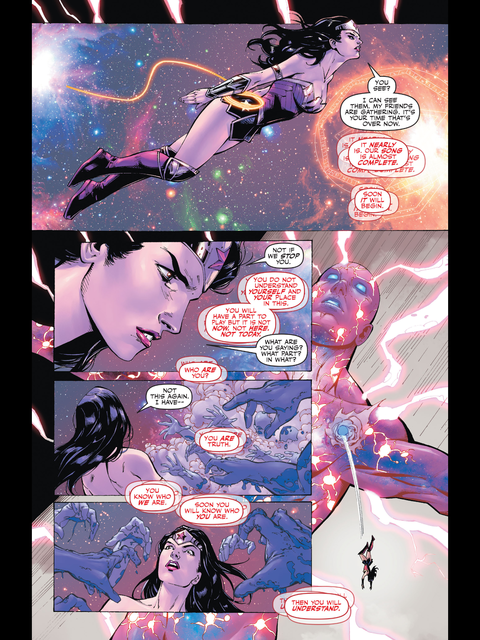 “You are truth?” If that’s not an obvious reference to Greg Rucka’s current storyline, I don’t know what is, particularly in light of comments made by Rucka:

We looked at the golden Lasso of Truth but it’s not the lasso that does it, it’s Diana who brings the truth.

The observant (yes, you guys are up again) will notice that Superman/Wonder Woman fave Tony Daniel is (intermittently) on artwork duty and giving the title a great look, particularly to Diana.

All in all, a little bit too much like Hitch’s recent Rao storyline, but sufficiently different for it not to matter too much and it’s clear that seeds are being sewn for future storylines here. Shame Diana just had to float around for so long, but she still came out of it well.

Any chance anyone else will pick up on Wondy’s lightning bolt in other titles, BTW?