‘Peak TV‘ is the name given to the idea of there being too much TV for us to consume. Thanks to the Internet, cable, et al, it’s a lot easier for a company to ‘transmit’ content; also, more and more people want to make content. As a result, that means there’s an awful lot of TV out there being made by an awful lot of people. However, there’s only so much talent in the world and it’s starting to get spread pretty thinly, particularly around the world’s media industry, which means that there’s a lot of bad TV made by people who don’t actually know how to make good TV.

A while ago I came up with the idea of ‘cargo cult TV‘ – TV going through all the motions of a genre but without really understanding the rules of that genre. As a result, it’s missing something essential. I’d like to expand that to encompass the idea of people making TV but not really getting TV.

Take Epix. Until recently, Epix like AMC – aka American Movie Classics – before it, was content to air other people’s content before suddenly deciding to make some TV shows of its own. The first to make it out of the gates is Berlin Station, created by spy novelist Olen Steinhauer and set in… well, you can probably guess.

Now Berlin Station goes through all the motions of being both a proper spy show and a proper TV show. Nevertheless, it’s cargo cult TV. Something intrinsic’s missing from it, preventing it from being either a spy show or a good TV show.

Like other cargo cultists, Steinhauer and Epix have done their best to emulate TV producers. They’ve recruited a great big, top notch cast. The hero of the piece is our very own Dick Head, Richard Armitage, who’s no stranger to spying thanks to Chris Ryan’s Strike Back, Captain America and Spooks. They’ve got Michelle Forbes (Homicide, The Killing (US), In Treatment), Rhys Ifans (Elementary, Twin Town), Tamlyn Tomita (Babylon 5, The Joy Luck Club) and Richard Jenkins (Six Feet Under), too.

They’ve found a German co-production partner, hired some actual German actors and flown all the way to Berlin to film everything. They’ve even done what every other political show has done of late and ‘stolen from the headlines’ – and, of course, since there are very few headlines about spying these days, that means Yet Another Edward Snowden whistleblower plotline. And they’ve hired a proper European film director for the first two episodes – Michaël Roskam (The Drop)

All of which is designed to fool the viewer into somehow thinking they’re watching a top, premium cable TV show.

END_OF_DOCUMENT_TOKEN_TO_BE_REPLACED

For those who are nostalgic for TV times past (like me), it’s sometimes easy to forget that the past wasn’t necessarily better – particularly for minority groups. Consider the deaf (assuming you’re not. Deaf that is). Time was that BSL signing on television was unheard of. It just didn’t happen.

The first exposure to it I remember getting was when one of my favourite early 80s bands, Red Box, appeared on Blue Peter to discuss the inclusion of a BSL signer in the video for their song ‘Lean On Me’.

Of course, when ‘For America’, their next song came out, no BSL signing was deemed necessary. Gimmick, maybe?

And apart from a new little show on Sunday afternoons called See Hear, that was about it for BSL for quite some time.

Nowadays, although we’re still not exactly talking global signing, the BBC has both signed versions of regular programming in its Sign Zone slot and original programming, too, including the now venerable See Hear.

You don’t have to stay up late set the video to watch signed programmes, since you can watch them on iPlayer, too. There’s even live signing on BBC News.

Like the BBC, Channel 4 has its own late night signing, as do E4 and Film4, and of course the recent Rio Paralympics was signed.

Other channels? Not so much.

Commercials are an interesting one. This recent one for Maltesers is something of a first.

Lovely, hey? But perhaps even lovelier is the signed version (yes, really), since it showed that enough people would recognise the BSL signer from the Rio Paralympics that he could be included in the ad. Not that he had a lot to do… 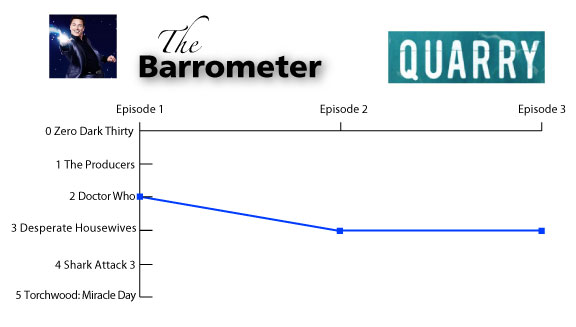 In the US: Fridays, 10pm, Cinemax
In the UK: Sky Atlantic. Starts October

Good direction can go a long way towards making a not-great show seem better. Quarry is such a show, benefitting pretty much with every scene from Greg Yaitanes’ direction. The former Banshee exec producer and director might not have created Quarry, but directing every episode of this first season, he’s certainly made his mark on what is simultaneously both Banshee and ‘anti-Banshee‘.

As I pointed out in my review of Quarry‘s first episode, thematically the two shows have a lot in common, with Logan Marshall-Green’s ex-Vietnam-vet turned hitman ‘Quarry’ enduring a lost love, the lure of a criminal lifestyle that draws him in and the simultaneous acknowledgement of crime’s costs, just as Banshee‘s ‘Lucas Hood’ had to experience. Since then we’ve also had greater emphasis on Damon Herriman, the gay fellow criminal who helps Marshall-Green, who is the Job of the piece.

But while Banshee was also often very beautiful to look at, it was a fast-paced, modern show that revelled in its pulp origins and ultra-violence, whereas Quarry wants to be a languid, visual, 70s, noirish piece that finds violence upsetting. All Quarry’s acts of violence are coming back to haunt him, practically in every scene, whether they’re his alleged war crimes from Vietnam or the murders he committed in the first episode.

The ex-soldier turned hitman isn’t exactly a new trope, but it’s more or less only Yaitanes’ direction and the largely non-American cast that lift it out of the ordinary and into the realm of quality TV. Would the second episode have been much good without the bravura first person POV car chase? Not a chance. Indeed, the whole show could have been a slower moving, slightly less ridiculous Blindspot if it had had a different director.

But visuals can only get you so far. Quarry‘s plot is slow-moving, its characters unappealing, its message muddled and confused. It’s not saying or doing anything you won’t have heard before in countless genre shows and movies. In fact, it’s probably saying less, and you could have watched Peter Mullan doing more or less the same act he’s doing here over on ITV in The Fixer for free.

Nevertheless, just as you would look at a painting for its aesthetics rather than its plot, you could certainly watch Quarry just to see some genuine innovation in visual storytelling on US TV. The story itself is no great shakes, but the visuals could keep you going for a whole season.

Barrometer rating: 3
TMINE prediction: Might make it to a second season, but a harder sell for Cinemax than Banshee