It was a relatively quiet week for Diana last week. For the young ‘uns and the light of heart, there was a trailer for a new movie based on DC SuperHero Girls called DC Super Hero Girls: Hero of the Year, which is due out in August in the US:

For the oldies and the dark of heart, there was a trailer for the extended Batman v Superman: Dawn of Justice, which is due out in June, and looks like it’ll have a bit more of our Wondy than the cinema release did, albeit mainly more fighting:

In comics, there were only two appearances of note. The first was DC Bombshells #47, in which Mera flashed back to a time when her ex-husband Nereus was getting a bit jealous of her and Diana spending so much time together (I wonder why…):

But much more importantly, we also had Wonder Woman: Rebirth #1, which not only starts setting out the tentpoles for how Diana is going to fare/get rebooted in the Rebirth universe, it also marks the first time the legendary Greg Rucka has written for our Di since he was unceremoniously booted off her title at the end of Volume 2, back in 2006 – yep, it’s been a decade, guys.

But more on that after the jump. 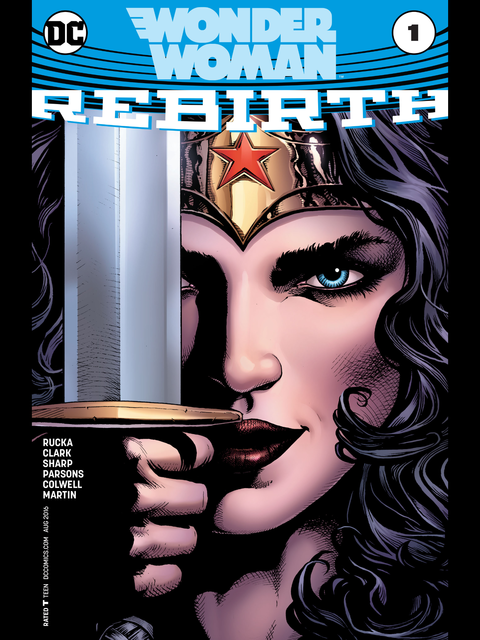 So she uses the Lasso of Truth on herself to find out – and is surprised by the answers.

So she goes to Olympus, searching for the truth.

Is it any good?
So welcome back Greg Rucka, one of the finest writers to grace DC’s Hall of Fame, and a man who not only studied Ancient Greek at college, he was pedantic enough to insist on spelling a certain Gorgon’s name ‘Medousa’ rather than the Latinate ‘Medusa’ all the way through his run – a man after my own heart, in other words. This is what we want. Let’s hope DC treats him a little better this time.

In common with many of the other Rebirth #1s, Wonder Woman: Rebirth #1 doesn’t have a huge amount of story to it, instead acting as an advert for the first issue proper of the full Rebirth run. But what there is very interesting.

Essentially, rather than a straight out reboot, Rucka takes both pre- and post-Flashpoint continuities and says they’re both true. Or both lies. Daughter of Zeus? Yep. Made out of clay? Yep. Or maybe something else completely different, with Diana remembering both. She also remembers the arrival of a young Steve Trevor on Paradise Island as per the nu52 (although he’s described as a sailor, rather than an airman, but presumably that’s metaphorical), while simultaneously recalling the initial events of George Perez’s Volume 2 with the old-school Ares:

On top of that, we also get reference to Volume 1 and ‘The Contest’, with Diana accepting her loss of eternal youth by departing from Paradise Island, as well as the return of the Volume 2 armour/uniform.

What to make of it all? Even Diana doesn’t know. We get all those continuities and others combined in one image of reality that Diana shatters:

Look closely and you’ll spot references to everything from Hippolyta’s death in Volume 2 to Rucka’s own run in that volume with Medousa to the first Superman-Wonder Woman kiss in the nu52 to Justice League #3‘s parademon battle to Cheetah and Wonder Woman fighting in Volume 1 and even Meredith Finch’s run.

But rather than simply retread old canon, Rucka starts to innovate. We have the new usage for the Lasso of Truth and the relocation of Diana’s home to Paris (naturally, you can see the Eiffel Tower from it). We also get a new costume for Diana.

And the trip to Olympus gives us fights with mythological beasts, including a Minotaur (no, not Ferdinand, who was a Kythotaur) and a Centaur.

And just to prove he hasn’t lost his touch…

Yep, not ‘automatons’ but ‘automatones‘ (Αυτοματονες), straight from The Iliad and The Odyssey.

Homer, Odyssey 7. 87
Golden doors closed the palace in [the palace of Alkinous King of the Phaiakians], and silver posts rose above the threshold; the lintel was of silver, the door-handle was of gold. Each side of the door were gold and silver watchdogs, deathless for ever and unageing, which Hephaistos with his wit and cunning had fashioned as guardians for the great house.

Homer, Iliad 18. 371:
[Hephaistos was] sweating as he turned here and there to his bellows busily, since he was working on twenty tripods which were to stand against the wall of his strong-founded dwelling. And he had set golden wheels underneath the base of each one so that of their own motion they could wheel into the immortal gathering, and return to his house: a wonder to look at. These were so far finished, but the elaborate ear handles were not yet on. He was forging these, and beating the chains out.

Homer, Iliad 18. 416:
[Hephaistos left his bellows] took up a heavy stick in his hand, and went to the doorway limping. And in support of their master moved his attendants. These are golden, and in appearance like living young women. There is intelligence in their hearts, and there is speech in them and strength, and from the immortal gods they have learned how to do things. These stirred nimbly in support of their master.

Hear that? That was me breathing a sigh of relief.

To be fair, it’s a little too soon to say how engaging the results of this will be. There’s also no attempt to reference, say, the death of Superman, which feels odd. But we’ve certainly got someone who knows what they’re doing, who spends most of the b-plot having Wonder Woman saving women from male aggression rather than men from female aggression à la Brian Azzarello, and who knows their alpha from their omega. I’m a little worried it might be too clever and too intellectual, sacrificing little things like humour and fun in favour of correctness, but fingers crossed, all will be good…

Every week, Weekly Wonder Woman keeps you up to date on everything involving DC Comics’ premier superheroine Movie news Justice League is out on DVD/Blu-Ray/4K this week. I’ve reviewed that elsewhere, and since there are […]

A review of Wonder Woman #24