In the last quarter of the 20th century, the whole world seemed to sicken. Civilised institutions, whether old or new, fell… as if some primal disorder was reasserting itself. And men asked themselves, “Why should this be?”

Professor Bernard Quatermass is one of the most important characters in TV history. Created by blog god Nigel Kneale back in 1953 for the BBC, Quatermass was the hero of The Quatermass Experiment, a ground-breaking piece of adult science-fiction television, created at a time when all the US had to offer the world was Captain Video.

The Quatermass Experiment saw Quatermass, the head of the ‘British Rocket Group’, sending into space a rocket containing three astronauts, only for it to come back down again with two of them missing and the survivor strangely changed. What happened to the missing astronauts is for the coldly scientific Quatermass to find out and his investigations are set to change the way we think about ourselves.

The six-part serial was so popular that despite being broadcast at a time when very few people actually owned a TV, it was able to empty the streets. The result was not only a movie adaptation by Hammer Films, but a 1955 sequel appropriately called Quatermass II. If The Quatermass Experiment was “we go to them”, Quatermass II was “they come to us”, with Quatermass discovering that his plans for a base on the moon have already been put into practice… in England. But what’s inside these domes and how is it that no one’s noticed them until now?

The popularity of this new serial was again sufficient for both a movie adaptation and another lavish sequel, Quatermass and the Pit, to be approved, the latter being broadcast in 1958. This saw a WWII bomb discovered during building works in London. However, subsequent examination reveals that the discovery is a lot, lot older than anyone could have guessed.

“We go to them”, “They come to us” but now it turns out that they have always been here – and that we are the Martians.

However, that was the last of Quatermass for a while. Although Kneale was asked in 1965 to write a new Quatermass story for the BBC2 anthology series Out of the Unknown, he declined the offer, which meant that the first new Quatermass the 1960s got to see was a Hammer adaptation of Quatermass and the Pit in 1967.

Kneale completed the script in February 1973, after which preliminary filming work began. However, for various reasons, the BBC got cold feet, and the serial was cancelled in the summer of that year.

The BBC’s rights to the serial expired in 1975, by which time Kneale was working for ITV on projects such as Murrain and Beasts. Then, in 1977, Star Wars arrived on the scene and suddenly everyone was interested in science-fiction again. In particular, Euston Films, an ITV film subsidiary, became interested – perhaps, in part, because it was overseen by blog goddess and famous Doctor Who producer Verity Lambert. And Euston wanted both a four-part TV series and a movie.

Guess what’s going to be released on Blu-Ray next week. Yes, after the jump, we’re going to be looking at the forthcoming release of Quatermass and The Quatermass Conclusion – the final adventures of Professor Bernard Quatermass (almost)

Here’s a trailer or three.

Plot
Both Quatermass and The Quatermass Conclusion are set ‘a few years’ in the future. And what a dystopian future it was, too – crime is rife, streets are filled with violent gangs and most young people have joined the cult of the Planet People, a hippy-like movement that rejects the ways of science in favour of roaming the countryside, moving from ancient stone circle to ancient stone circle, in the hope that they’ll be transported to the stars.

Quatermass (Mills), who has been in retirement in Scotland, comes to the city looking for his granddaughter, who has joined the Planet People. There he meets a fellow scientist, Joseph Kapp (MacCorkindale), and together they discover that the Planet People might not be completely wrong about the significance of stone circles to aliens. But that going to the stars thing? On that, they’re very, very wrong…

The serial is a pessimistic misery-fest, fuelled by what Kneale (and others) perceived as the breakdown in society at the end of the 60s:

Quatermass is a story of the future – but perhaps only a few years from now. There are some clues already in the most obvious places: the streets. Pavements littered with rubbish. Walls painted with angry graffiti. Belfast black with smoke and rage. Worst of all, the mindless violence

In particular, it’s a rage against the rejection of science by the young and a vindication of the ‘sensible’ older generation, who at first can only watch as their children and grandchildren descend into idiocy under the thrall of some alien force, before the power of science allows the golden oldies to save the day.

All of which had perhaps some currency in 1973 but by 1979 when it aired, Quatermass was predicting a future that looked like the past of five to ten years earlier – rather than the Kneale predictiveness of The Year of the Sex Olympics, we had something that had already been beaten to the punch by the likes of Children of the Stones and Sky on children’s TV and by Soylent Green, Logan’s Run, Rollerball and other dystopian movies at the cinema.

Indeed, even Kneale wasn’t that happy with the finished product.

Frankly, I was never happy with the whole idea in the first place. The central idea was too ordinary

Mills, the sixth actor to play Quatermass, “didn’t have the authority to play Quatermass”, as far as Kneale was concerned, and as for MacCorkindale, “we had him in Beasts playing an idiot and he was very good at that.”

Kneale also had to deal with writing something that could work as four hour-long episodes or one 100-minute film. Mostly that came down to writing material that could be removed, rather than padding it, according to Kneale. Nevertheless, while Quatermass has considerably more depth and detail than The Quatermass Conclusion, the movie suffers little from the edits and clips along at a considerably better pace than the TV show.

Nevertheless, Nigel Kneale on his worst day is still 1,000 times better than many writers and for all its faults, Quatermass/The Quatermass Conclusion is a fascinating vision, lovingly and lavishly made, that allows the Professor to save the world one last time. Despite the unrevolutionary central idea, some of the more peripheral themes are considerably disturbing, there are lovely little details such as the fictional children’s nursery rhyme “Ringstone Round” and Kneale and director Piers Haggard do manage to convey a collapsing Western society on the brink of extinction almost as well as Soylent Green does – a film with which the serial has surprising amounts in common, both tonally and visually.

Mills may not have the cold, steely nerve of first Quatermasses Reginald Tate and Brian Donlevy or even the clubby warmth of Andre Morrell, but he convincingly has the air of someone with very little to cling onto other than hope for his granddaughter; MacCorkindale may not be the most convincing Jewish astronomer ever, but he does reasonably well as an action hero; and the cast of young Planet People do a decent enough job of persuading a disbelieving audience that an entire generation could go the way of Harry Potter’s Luna Lovegood.

All in all, while it’s no Quatermass and the Pit, it’s a singularly bleak vision of the future for UK TV, while also a moving sign off for Professor Quatermass that ends with a surprising note of hope for the world.

However, for this first ever Blu-Ray release, Network has gone back to the original 35mm negatives for both Quatermass and The Quatermass Conclusion, cleaned them up and given us an astonishingly pristine HD version of both, the latter in its original theatrical picture ratio of 1.78:1. The picture quality is really quite amazingly, pin-prick sharp.

On top of that, they’ve also created a 5.1 sound mix from the original triple-track audio, although the original mono soundtrack is included, too. Which one will you go for, I wonder?

Unfortunately, though, there’s not much extant material for them to work with, so the other extra features are purely there for the purists: there are music-only tracks for all four episodes, the original episode recaps (the first of which has no audio), textless titles and an image gallery. There’s also the original trailer for The Quatermass Conclusion, again without any sound.

There are a couple of extra things, too, but seeing as what I get to review is this… 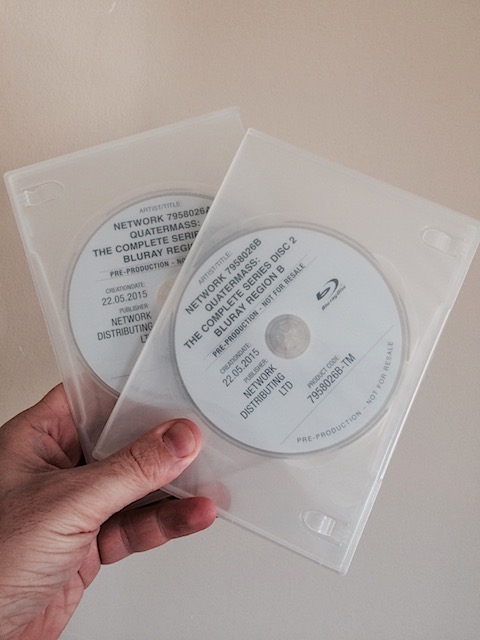 …or the “booklet by archive TV historian Andrew Pixley” are any good. Knowing Andrew as I do, however, I’m sure it covers pretty much every aspect of the show’s production in extraordinary detail.

A DVD version is also available, but you really won’t feel the benefit of Network’s work if you get that, particularly if you already own one of the previous DVD releases. However, if you’re a Quatermass fan with a Blu-Ray player, this is a must-have purchase.

Liz Shaw’s Best Bits: Doctor Who and the Silurians

BBC4’s odd, isn’t it? It’s basically 1980’s BBC2, pumping out the weird and wonderful – whatever the controller happens to find personally interesting, rather than what “common plebs” (in BBC parlance) might like. This can […]