It’s “What did you watch this week?, my chance to tell you what I movies and TV I’ve watched this week that I haven’t already reviewed and your chance to recommend things to everyone else (and me) in case I’ve missed them.

Perception (TNT/Watch)
Last summer’s slightly surprising combination of dull old procedural and interesting examination of psychology and mental health returns with a new character, the probable loss of at least one character, the surprising return of another character and the same old dull procedural. However, as well as the usual mind-bending issue with the show that you’re never sure what’s real and what’s hallucination, we have a possible slight departure from format – this first episode was less concerned with investigation and more concerned with the philosophical question of whether someone who’s had a brain injury and resulting personality change is still the same person they were before the injury. It’s a question that other shows probably wouldn’t touch with a barge pole but the show was all the better for it. Rachael Leigh Cook is still the least plausible FBI agent in TV history, though.

Under the Dome (CBS/Channel 5)
Based on a Stephen King novel, this mini-series sees a small town full of Diverse People With Issues And Secrets suddenly enveloped by a forcefield dome that blocks everything from sound and cars through to radio signals and electricity. Why’s it happening, who’s behind it, what’s going to happen next and will everyone sort out their issues before their secrets are discovered? Probably.

Full of people who’ve never been the stars of things but you’ll have seen being really good in loads of other shows – Rachelle Lefevre (Life on Mars, The Deep End, Twilight), Dean Norris (Breaking Bad) and Mike Vogel (Bates Motel, Pan Am) – as well as Britt Robertson (The Secret Circle, Life Unexpected), this is very odd flashback to the 80s, when Stephen King mini-series were all the rage. As back then, you’ll spend all your time working out who’s going to end up dead next and what precisely is going on. It’s pretty much exactly what you’d think if you’ve seen any such mini-series before, with dodgy dialogue, stock characters but an intriguing central idea. It’s also surprisingly gruesome at times.

With ratings of 12m, hopefully it’ll boost the careers of at least Lefevre, who’s needed a breakout role for ages and was unceremoniously dumped from the third Twilight movie in favour of the somewhat inferior Bryce Dallas Howard, and Norris, now that Breaking Bad is leaving us. I could do without the dodgy stalker bloke, though.

World War Z
Brad Pitt travels the world looking for a way to fight the zombie plague that’s broken out. Taking in Korea and Israel, he eventually finds his solution is… Torchwood. Well, maybe. You’ll get that joke if you ever watch the movie.

Not great, doesn’t make huge sense, Mireille Enos (The Killing US) is largely wasted and as in movies such as Contagion, a plethora of stars turns up for five minutes only to disappear almost as quickly. But it’s tense all the way through and has a few funny moments. Better than the average zombie movie, anyway.

A Good Way To Die Hard
Bruce Willis goes off to Russia when his wayward son shoots someone in a nightclub and is put on trial. However, all is not what it seems and soon Willis and Willis Jr are double-acting their way through numerous shoot-outs and car chases around Russia.

The best that can probably be said about this is that it’s probably the second-best of the Die Hard movies, with at least some intelligence on display in places throughout the movie. But it shows nowhere near the level of human involvement and innovation of the original, and the constant CGI effects mean that nothing feels real enough to care about.

“What did you watch this week?” is your chance to recommend to friends and fellow blog readers the TV and films that they might be missing or should avoid – and for me to do mini-reviews of everything I’ve watched. Since we live in the fabulous world of Internet catch-up services like the iPlayer and Hulu, why not tell your fellow readers what you’ve seen so they can see the good stuff they might have missed?

I’ve extended the blog’s handy guide to religious shows again, this time with a collection of Christian shows that somehow escaped the list the first time round: Save Me, Angels in America, Life on Mars/Ashes to Ashes and Miracles. More details at the guide itself, obviously.

Crime, these days, is global. In Europe, which doesn’t have an equivalent to the FBI specifically tasked with investigating ‘federal’ crimes, if you’re a computer hacker in Poland, you can steal money from a French bank as easily as if you were in Paris and the policiers will have a devil of a time bringing you to book. If you’ve killed someone in London and are looking to avoid the police, a quick trip on the Eurostar over to Brussels and even if the Met know you committed the crime, getting the Federale Politie/Police Fédérale/Föderale Polizei to not only talk to each other but find you and arrest you will be far more challenging for them than getting the South Tyneside police to do the same.

My, if only there were some kind of pan-European bunch of cops tasked with investigating crimes that cross EU state boundaries, able to skirt these kind of jurisdictional issues so they can bring to heel criminals who have escaped justice because of lack of co-operation between forces.

Well, there isn’t, but Crossing Lines, a US-French-German co-production, imagines such an elite group of cops, albeit one that needs an American lead for in-story reasons that are a little opaque and for real-world reasons that are far more explicable.

It stars William Fichtner (Prison Break, Invasion, MDs) as a crippled New York cop who’s moved to the Netherlands and become a garbage collector for reasons that are initially inexplicable but become clearer by the end of the pilot. He’s recruited for his deductive powers (and American-ness) by a French detective (singer and occasional actor Marc Lavoine) who heads up an elite team of cops at the International Criminal Court in the Hague. The team also includes a British interrogation specialist (Genevieve O’Reilly), a Northern Irish weapons specialist and former traveller (Richard Flood), a German technology expert (Tom Wlaschiha from HBO’s Game of Thrones), an Italian undercover specialist (Gabriella Pession) and a French crime analyst with an eidetic memory (Moon Dailly from France 3’s Commissaire Magellan). Together with the help of an ICC inspector (Donald Sutherland – do I really have to tell you who he is?), the team can investigate crimes other groups can’t touch.

Their first case? Well, given the series was created by one of the show runners of Criminal Minds, despite the shiny international cast, the numerous glossy European locations, relatively high budget and a surprising nose for local cultural differences, would it surprise you if I told you it was a relatively dull, tedious, cliched affair involving an American serial killer? Probably not.

END_OF_DOCUMENT_TOKEN_TO_BE_REPLACED 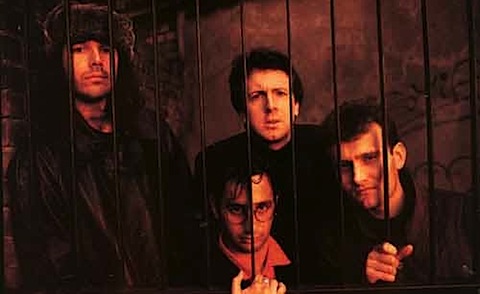 Tracing the origins of modern ‘lad’ culture isn’t easy. Some cite James Brown’s launch of Loaded – the magazine for men who ‘should know better’ – while others point to the arrival of competitor FHM as its more definitive arrival in society.

However, I think you have to cast your mind back a little earlier to the late 80s and early 90s to first radio and then to TV with a comedy show called The Mary Whitehouse Experience. Originally airing on Radio 1 before moving over to BBC2, the show was the first real sign that the politically correct 1980s stand-up and alternative comedy scene was about to be taken over by ‘lad’ humour.

END_OF_DOCUMENT_TOKEN_TO_BE_REPLACED

This was taken by the Buffy season 2 stunt team and includes such sights as David Boreanaz learning how to throw, James Marsters getting a haircut and Sarah Michelle Gellar ice-skating and doing a chicken dance.