DC You’s new look for Wonder Woman launched last week, but you’d be hard pressed to notice it this week, thanks to all the Elseworlds versions in Injustice: Gods Among Us: Year Four and Sensation Comics wearing variations of her outfits from Volumes 1 and 2 instead. Indeed, the only standard continuity Wonder Woman around is in Deathstroke #7 and she’s wearing her original nu52 outfit. But we’ll talk all about that after the jump.

We’ll also be looking at what happens when you try to put the Silver Age Cheetah on trial, over in Sensation Comics, and in Injustice: Gods Among Us, we’ll finally get round to answering the question “Who would win in a fair fight between Superman and Wonder Woman?” And so far, it’s not looking good for the last son of Krypton…

Deathstroke #7
Plot
Once upon a time, not so long ago, Superman/Wonder Woman was the hottest of all the nu52 comics. Apart from the subject matter, of course, this was down to two things:

Soule, of course, got poached and signed an exclusivity deal with Marvel, where he went off to do some sterling work on the likes of She Hulk. At the same time, DC tempted Daniel away with the promise of both writing and artistic duties on his own title, Deathstroke.

I won’t go into all the details of who Deathstroke (aka Slade Wilson aka Deathstroke The Terminator until copyright got the better of him) is, since Wikipedia can help out much better there, other than he’s an anti-hero mercenary who’s good with swords and has a set of unique skills. But one of Daniel’s main jobs over the past six issues has been to change the one-eyed old guy of previous runs…

He’s done this pretty well, although all the Deathstroke comic book trappings are a bit much for me. Now, though, Daniel is starting on a new story arc that returns him to his old stomping ground: the gods of Olympus and Wonder Woman. At the end of issue #6, the Merc without much of a mouth got a new client: the god Hephaestus. And Hephaestus wants him to kill another god.

To do this, he’s forged for Deathstroke a shiny new sword that can kill gods, which Deathstroke first has to learn how to use, something not helped by the fact he’s only recently stopped being an old bloke with only one eye.

It turns out that Hephaestus is working for another god, whose identity he’s keeping to himself, and his target is the Titan Lapetus ‘The Piercer’, the god of mortality, who’s liable to cause all sorts of trouble on Olympus. Never heard of him? Me, neither, because Daniel’s just made him up. Or maybe Hephaestus has, gambling that Slade Wilson may not have a copy of Hesiod’s Theogeny in his back pocket and won’t point out there’s no such Titan.

So where is this alleged Lapetus? Tartarus, which as we all know has a hidden entrance on Paradise Island, to which Hephaestus takes him in his chariot.

Deathstroke first has to evade the Amazons, which he does with a little help from the disembodied, virtual head of Hephaestus. But down in Tartarus, where Lapethus should be, is a statue of Apollo.

Or is it? Deathstroke thinks otherwise – perhaps Lapetus is inside it, so puts his sword to the test, despite Hephaestus’s strong suggestions he not. Big mistake.

Hephaestus disappears, leaving Deathstroke behind believing he’s been duped. And then there’s a new arrival, one who’s about to reveal what Deathstroke has actually done. And she’s not best pleased…

Is it any good?
I’ll admit that were it not for Diana being in this, I wouldn’t read it and once she’s gone I won’t be reading it any more. I had actually tried the first two issues of Deathstroke to see what Daniel was doing, but when you have groups of assassins called ‘the Dead Bastards’ and Deathstroke is facing ‘Bronze Tiger’, your mind tends to rebel against the comic book trappings.

Still, Daniel’s art is as great as always and he still draws as good a Hephaestus as ever. The return and possible resurrection (?) of Apollo and the general Amazon trappings of the issue are well done and add to the overall Wonder Woman mythos. It’s also quite funny in places, with Deathstroke getting lost on his mission.

Worth getting for the story run, but as a title, not a keeper, at least for me. 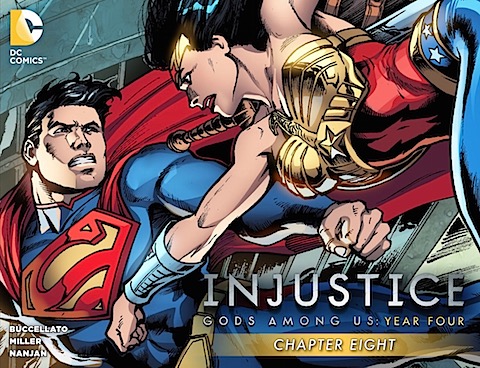 Injustice: Gods Among Us: Year Four #8
Plot
Well, it’s that moment you’ve all been waiting for: Superman and Wonder Woman in a gory fight to the death. First, though, there are forms to observe. First, you have to beat up Batman for organising the fight in the first place.

Then the gods have to ensure it’s a fair fight.

(Apparently, this Wonder Woman has been hiding the fact Zeus is her dad from her Justice League pals, too.)

Zeus explains that because Hippolyta owes Hera, Wonder Woman has to fight for her or else Hippolyta’s dead. A choice between Superman and her mum? No choice.

Rules in place, time to fight. At first, given Wonder Woman’s sword isn’t made of the usual fine, magical steel of other Wonder Women’s swords, Superman gets the upper hand… and headbutt.

Is she beaten? Come on. This is Wonder Woman we’re talking about and she’s not going to lose any fight, no matter how rough she has to play…

Is it any good?
Well, the comic is advertised as coming from the creators of Mortal Kombat and if you hadn’t got the hint by now that they like it a bit bloody, this was your wake up call. Ugh. And I suspect more ugh to come tomorrow in the next issue.

It’s long past the point where we can talk about how out of character it is all is for both Superman and Wonder Woman, simply because we’re now very firmly down a very Elseworlds path on this one, although one can’t help but feel that maybe both Diana and Clark might have tried to find a different solution in most other universes. One that didn’t end up with them killing each other, anyway.

For what it is, it’s decently done, although no one from Zeus and Hera through to Clark, Diana and Bruce feels very in-character or recognisable. The artwork’s a bit ropey, but fine. It’s all right, just a bit depressing and nasty. And at least Wonder Woman’s winning at this point.

Sensation Comics Featuring Wonder Woman #40
Plot
Wonder Woman’s had yet another fight with the Cheetah, this time at the National Air and Space Museum. Lots of people were hurt. Naturally, there’s an investigation.

The question is: what to do with Cheetah? After all, Debbi Domaine has a personality order.

Trouble is Iron Heights keeps on losing its mentally ill supercriminals. All the same, that’s where the judge order she be sent.

Is it any good?
It’s a two-parter, which makes it a little hard to judge. Most of the issue is really a musing on how one would fight for justice in a world not just of superheroes but of supervillains, if one were just an ordinary person, rather than a billionaire, say.

Here, the focus of the piece whom Volume 1 era Wonder Woman muses about is a district attorney whose sister was just one of a mere 29 people the Scarecrow killed on a quick jaunt away from Gotham to Midway City.

While the legal trial of a lesser supervillain is slightly hackneyed and not the best way to investigate these issues, the accompanying flashback being even clunkier, the general thrust of the storytelling works well, emphasising just what life must be like for the little people, slaughtered in their dozens by supervillains, with superheroes getting all the headlines while the innocents’ deaths are in the small print pages later.

Wonder Woman herself doesn’t actually get to much but sit and listen, although her fight with the Cheetah in the first flashback is decent enough, if settled without much imagination. But I’m intrigued enough to be interested in seeing where part 2 takes us.

Question of the week: is another go at a Wonder Woman TV series a good thing or a bad thing?