It’s that time of the month again – the latest issue of DC’s most consistently enjoyable and excellent title, Superman/Wonder Woman, is hitting people’s tablets this week and it’s a corker, as writer Charles Soule and artist Tony Daniel wrap up the title’s first initial arc with an almost neverending series of surprises, innovations and standout moments the likes of which the nu52 hasn’t ever seen before.

I’ll also be looking after the jump at Justice League of America #13, which features a guest appearance by Wonder Woman as the only one of the Justice League who can finally end the Forever Evil storyline. Just one more reason to like her, huh?

I should also point out that in one of the above two comics we finally get to see Wonder Woman’s new invisible jet. Well, not see, obviously but…

Superman/Wonder Woman #6
Plot
After the power couple recuperate from last issue’s fight with Zod and Faora and decide to be grown-ups about mixing work and their relationship – for the sake of the planet, at the very least…

…they head to Hephaestus’ place to tool up for battle. Diana’s brother gives them some shiny new armour as well as the use of his invisible chariot…

After getting a thumping from Zod and Faora, our properly dynamic duo reveal their armour has been absorbing it all, ready to return it on their enemies. Unfortunately, it turns out that Apollo, miffed at being dissed by Supes, has been helping Zod and Faora all along.

After he supercharges them with some sunlight, Zod and Faora are able to defeat our heroes and dump them in a nearby fission reactor so they can open a Phantom Zone gateway and let Warworld and company out.

After a final Empire Strikes Back style admission and acknowledgement of love, a combination of Superman’s super-vision and Wonder Woman’s super-sharp sword allow the power couple to cause an explosion that shuts down the gateway… but at a big cost. 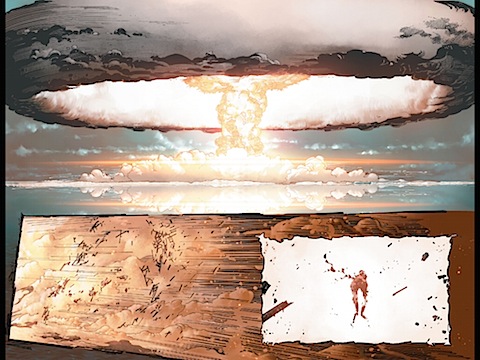 Is it any good?
Well, what’s to complain about? Maybe a line or two out of place here and there and that’s not quite how the physics of nuclear explosions works*, but you’ve got to be really looking for imperfection at this point.

Overall, the issue not only gives you pretty much everything you could hope for in and of itself, whether you’re a Superman or a Wonder Woman fan (or both), it rounds off the first arc very nicely, neatly answering the title’s primary question and raison d’être: “Why are Superman and Wonder Woman together?” As well as love, which Superman acknowledges for the first time here, it’s the idea that Superman and Wonder Woman can solve big problems better together as well as providing each other with an oasis of calm that no one else can.

But as well as that, we have continuity fun aplenty. Superman fans not only get more Zod and Faora, they get Warworld and a mention of Doomsday, who’s going to be figuring prominently again in later issues. Meanwhile, Wonder Woman’s sword is not only used to quite literally split the atom for the first time, it’s produced by Diana from one of her bracelets, which is something pretty much everyone except Brian Azzarello has ignored up until now, despite it being very cool.

On top of that, we get some shiny new, action-figure compatible armour, as well as the nu52 version of her invisible plane. Over the years, this has gone through many iterations. Initially, back when Wondy couldn’t fly, it was a necessary way for her to get to Paradise Island and back:

In later years, it went through several iterations, including being a shapechanging alien that was also the ‘Wonderdome’…

…which was later on replaced by a stealth aircraft developed by Wayne Industries:

Of course, one might wonder why, once Wonder Woman could fly, she’d need an invisible form of transport, and Soule provides a lovely, nu52 explanation that actually feels both logical and in keeping with Greek mythology – an invisible chariot, needed to avoid detection by gods and aliens alike.

Also in keeping myth-wise is Apollo’s secret interventions behind the scenes as recompense for Superman’s slights against him. While one can still quibble about whether he’d have been to so easy to beat in a fight in the first place, the fact he’s not letting it go is very fitting.

Strife’s suggestion that maybe the gods could fight whoever comes through the gateway is also thoroughly in keeping, even if the idea that the gods like wars isn’t. However, the latter point might explain one of the biggest issues afflicting DC comics since their introduction – why do the gods not interfere more often when Earth is in peril? Answer: they’re waiting for all the heroes to be killed off first so they can have a proper fight.

* Yes, fellow nerds, you need a densely packed amount of Uranium that contains sufficiently high amounts of U235 and enough stray neutrons that several atoms decay simultaneously releasing neutrons to cause at least as many other Uranium atoms to do the same. You’re not so much splitting the atom as splitting lots of atoms and getting them to do more for you. One’s just not going to be enough, unless you’re lucky and it’s in the middle of a very dense group of unstable Uranium atoms.

Justice League of America #13
Over in JLA, of course, everyone’s still trapped in both Firestorm’s matrix and the neverending Forever Evil storyline. But Stargirl’s on the job and trying to release everyone.

However, it turns out it’s all an illusion and everyone’s still trapped. Oops.

What they really need – as Steve Trevor worked out in Forever Evil: Argus #4, 5 – is Wonder Woman’s lasso. But that’s not going to be enough. They’re going to need Wonder Woman, too. Paging Diana… paging Diana… come and save the day and end this storyline, please.

Yes, it’s Weekly Wonder Woman – keeping you up to date on pretty much anything involving DC Comics’ premier superheroine, including her BO Wonder Woman‘s continued advance at the worldwide box office has dominated the […]

A review of Wonder Woman #27 and Justice League: War