After the jump, we’ll talk about all the other things that (possibly) ended in Wonder Woman #28, as well as Wonder Woman’s appearance in Injustice: Gods Among Us and various mentions in Forever Evil: Argus #5, in which Steve Trevor tries to prove he’s more than just her ex-boyfriend… by trying to beat up her arch enemy Cheetah and getting her lasso back.

Wonder Woman #28
Plot
With the assistance of Artemis and Hermes, Diana goes looking for Dionysus, Zola and Zeke. They find them just as Cassandra, her army and her Minotaur show up.

Dionysus gets captured, but is perfectly happy to help Cassandra in her desire to get to Olympus.

…with Wonder Woman along for the ride.

Meanwhile, the First Born has broken his bonds and is fighting Apollo.

When it looks like the First Born is going to win, Apollo (metaphorically) presses the self-destruct button to stop him… just as Cassandra and co arrive.

Is it any good?
It suffers from the usual Azz flaws but at least things are starting to happen and there are some excellent individual scenes.

So on the one hand, we have dialogue that is at times incomprehensible and reads like it’s been through Google Translate; enough of a passing relationship with Greek myth to tantalise but not enough that it feels like myth has been understood or its proper potential exploited; the usual triumph of male brute strength over intelligence, women, etc; and Wonder Woman being her usual reactive, dependent self.

On the other, we do get some good fights, the detonation of Olympus, Wonder Woman flying and doing bullets-and-bracelets, some good individual character moments for Hermes, Hera, Artemis and Dionysus, and the sense that finally we’re heading towards something good. But then I’ve said that before.

The biggest problem is not a lot of it makes sense. Dionysus, the god of insanity and abandon, known for turning things into other harmless things (even Azz makes that point), decides instead to tie up an obviously very strong thing with some vines instead of doing all the things he’s best known for. Why?

Apollo funnels the power of the sun at the First Born, which should be enough to vaporise him, no? Apparently not, because he’s used to fire apparently. And because he’s a big manly bloke and being big and manly trumps everything else. So why did he need the dragon’s hide to protect himself up until now?

I’ve probably said this before, but this is essentially a ‘tone’ book – one that tries to achieve a certain tone and style, but ignores pretty much everything else, including plotting and logic, in order to achieve it. So as much as I’m grateful to Brian Azzarello for setting that tone and providing a strong foundation, with so little pay-off and with so many other things ‘off’ with the book, I’m now very much looking forward to his departure and some fresh blood to enliven the title and take it in new directions.

Injustice: Gods Among Us, Year Two #4
With Supes taking over the world and scaring the population into being nice to each other for a change, Sinestro is naturally a happy Yellow Lantern and much of this year’s story is about the spread of Supes’ regime and how it affects other planets as well as the various Lantern Corps.

But Supes is also meditating on poor Diana, currently in hospital after having being nuked. Now, if you’ve been missing Hippolyta, Wonder Woman’s mum, and the rest of the Amazons in the DC universe-proper, joy should be yours since she pops up this issue to lend a hand in helping Diana’s recovery by getting the gods involved. The eagle-eyed will note that despite this being alternative universe territory, Hippolyta is blonde in this reality, just as in the nu52.

Quite a nice issue overall for Diana, even if she does spend her entire time unconscious.

Forever Evil: Argus #5
Last issue, Steve Trevor worked out that he needs Wonder Woman’s lasso to rescue the Justice League from inside Firestorm. Unfortunately, Cheetah now has it, so together with an unexpected ally, he heads off to retrieve it.

Not unexpectedly, he runs into trouble, having to deal not just with the godly Cheetah and Wonder Woman’s lasso, but also a whole bunch of animal superheroes.

Most of the issue involves a tussle between Steve and Cheetah, with Cheetah taunting him once she’s captured him about how he’s basically just Wonder Woman’s ex, and Steve indignantly claiming that he’s much, much more than just that… before showing off how much he knows about Greek myths and Wonder Woman and stuff thanks to all his avid hours of reading about her and everything.

Intriguingly, though, Steve reveals a subtle change to Diana’s lasso of truth in the nu52 – apart from it now being called the Hephaestus’s Lasso of Truth, rather than Gaia’s. Apparently, in Thor-esque style, only the purest of heart can wield the Lasso and if there’s a conflict, the purer of two wielders will triumph over the other – with Diana having the purest of all hearts and therefore being the Lasso’s true wielder.

It’s an interesting tweak to the Lasso’s mythos, since pre-nu52 it was created from Gaia’s girdle by Hephaestus specifically for Diana. 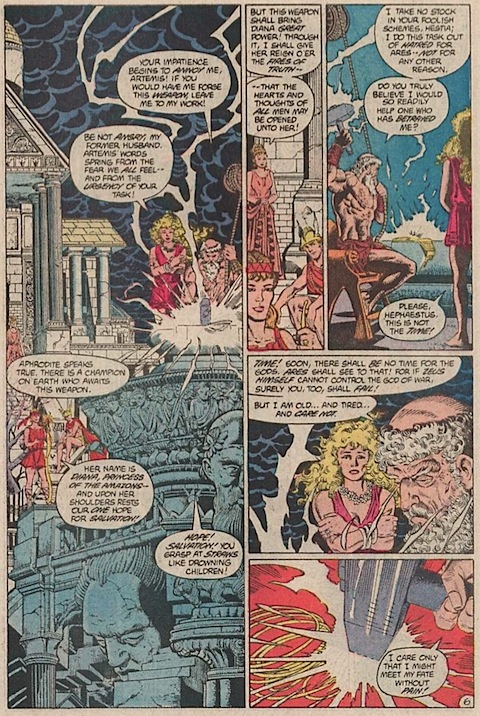 However, in the nu52’s it been seen until now as just one of the weapons that Hephaestus forged for the Amazons, handed down from Wonder Woman’s mother to her.

Now it turns out its got a history. Interesting.

Yes, it’s Weekly Wonder Woman – keeping you up to date on pretty much anything involving DC Comics’ premier superheroine, including Twitter spats with James Cameron And we’re back in the room, Wondy fans, following […]

Mini-reviews: DC Universe vs Masters of the Universe #2/Smallville #68