This month in Superman/Wonder Woman, it’s a surprisingly early crux point for that usual relationship milestone: the boyfriend’s meeting with the girlfriend’s family. Although Supes has already had fun with Wondy’s nephew, Eros, over in Young Romance, with Wondy apparently needing some new weapons to deal with Doomsday, it’s time for him to meet her brother Hephaestus, weaponsmith for the gods. Except brother Apollo and sister Strife have decided they’re not that sure about Wondy’s new beau and get a bit snooty.

Also this week, we’ll be having a look at the conclusion to Smallville’s ‘Olympus’ arc, as well as a brief glance at Forever Evil #2 and Justice League of America #9. See you after the jump.

Plot
After Wonder Woman gets something of a hammering from Doomsday, after which she’s saved by Superman… 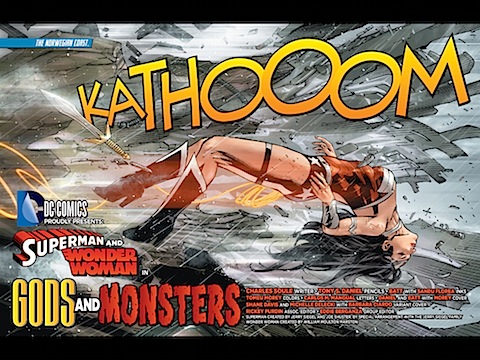 …Superman reveals that Doomsday was one of the creatures held prisoner in the Phantom Zone, which might be having problems. Superman, despite not having died at the hands of Doomsday in this timeline, clearly has issues with him/it, but Wondy gives him some reassurance.

But decides some new weapons might be handy for Superman, given the situation.

However, Apollo has been watching with Strife from up on Olympus and doesn’t think Superman deserves gifts from the gods.

After suggesting that Superman is a bit of an inferior, Apollo ’slut shames’ Diana, Supes gets a bit miffed, and Apollo gives him a slap for his trouble.

Which annoys Supes. Apollo unwisely tries to sun him to death, which is just what Supes needs to twat Apollo.

However, Doomsday isn’t the only thing coming out of the Phantom Zone. Go on: you know you want to say it…

Is it any good?
You know, just for once in the nu52, it would be really good if Wonder Woman could take on and defeat a notable enemy by herself. Just once*. But whether it’s been in her own book or Justice League, she’s either been kicked around or needed help to defeat things that she could have handled by herself in the good old days. It also doesn’t make her look good if her enemies are shown to be easily defeatable by other superheroes, even Superman.

Here, in Superman/Wonder Woman #2, we have Wonder Woman having to be rescued from Doomsday before she can execute a cunning plan, even of escape; we get Superman out-muscling Hephaestus; and we get Superman finding it relatively easy to beat up Apollo, who gave Wonder Woman such a hard time back in Wonder Woman #11. Yes, Supes did get an extra burst of sun energy from Apollo to do it – although he describes it as being merely like a shot of adrenaline – but

You can probably argue point 2, but at the very least, it makes Apollo and (by implication) Diana look a bit weak and pathetic compared to the all-powerful Superman. Wondy beating up Apollo after he gives Superman a bruising/sun-sucking (a Magneto-esque “My, do you really get your entire power from the sun’s light… let’s point those fists of yours in a safer direction, then”, perhaps?) would have been a far more edifying spectacle, to me, at least.

Oh well, fingers crossed that later down the line Wondy will get to save Supes. And that someone, somewhere will actually notice the nifty two swords thing Brian Azzarello gave Wondy in issue #15 and get her to use them in a fight.

Less nitpickingly, despite being all about Supes and how awesome he is, it’s still a pretty good issue, if less dense than the first, which managed to fit in an awful lot. We have some nice moments between Diana and Clark – although, again, it’s noticeable that all the relationship and emoting side of things is coming from Wondy, while all the job-related things are coming from Clark. Commitment issues from Clark? Let’s hope not – I suspect more that this Clark is a bit more emotionally closed than we’ve seen pre nu-52. Diana, despite her pastings, does get some good, humorous moments, as well as new details such as her ability to heal even broken arms quickly thanks to her divinity. Charles Soule handles the pantheon reasonably well, although Strife’s ability to fly is a new one. The collapse of the Phantom Zone and the arrival of Zod only bode good things. And Tony Daniel’s art is as fabulous as ever, doing some great work with Cliff Chiang’s original designs.

Smallville #69
So a somewhat intriguing end to Diana’s introduction to the Smallvilleuniverse. As well as confirmation that this Wonder Woman is also a goddess…

…we essentially have a flashback to Volume 3 of Wonder Woman with Diana remaining behind as a diplomatic envoy from Thermiscira, while also staying undercover at the DEO as ‘Diana Prince’.

It’s a nice way to finish things off and I’m hoping there’s going to be a lot more Wonder Woman in Smallville.

And in Justice League of America #9 that Wonder Woman is still fighting in her hell. And is very tall – not that you’d know it from any other DC comic except Wonder Woman.

Every week, Weekly Wonder Woman keeps you up to date on everything involving DC Comics’ premier superheroine Comics news The big news this week is the launch of DC’s new mature readers “Black Label” imprint, […]

Every Wednesday, TMINE reviews two movies and infringes a former mobile phone company’s trademarked marketing gimmick Time prevented me from doing Orange Wednesday last week, so to make up for it, this week, TMINE will […]

A review of Wonder Woman #4 and Justice League #4