Every Friday, TMINE lets you know the latest announcements about when new imported TV shows will finally be arriving on UK screens – assuming anyone’s bought anything, of course

Sheldon (US: CBS) has been the only acquisition this week, with E4 picking it up. I was moderately surprised by the first episode, and you might like it, too, but you won’t get to watch it until 2018, apparently. Sorry.

Otherwise, two new shows got premiere dates this week, the first of which starts on Wednesday: 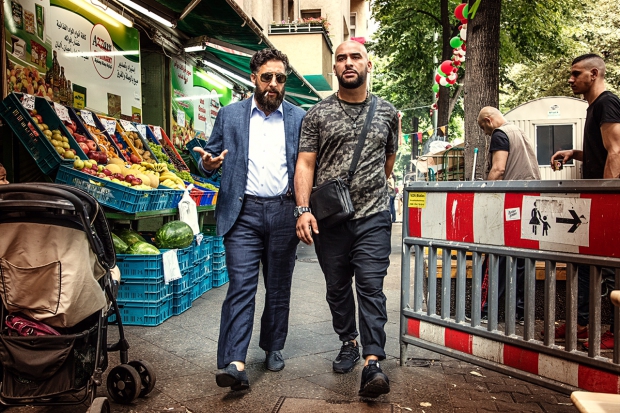 Six-part story centred on an Arab family in the Neukölln district of Berlin where Toni Hamady (Kida Khodr Ramadan) and his wife Kalila (Maryam Zaree) want to leave their four blocks and put criminal activities behind them. But after his brother-in-law is arrested in a raid, Toni owes it to his family to take over operational leadership of the clan. When an old friend suddenly returns to Berlin, Toni believes he has someone he can trust at his side, and the hope of a lawful future seems to be within reach once more. But it’s too late for an escape.

Haven’t seen it, since it’s German and only aired in June, but I suspect it’ll probably be showing up in Boxset Monday some time soon.

John Singleton-produced period drama about the birth of the crack epidemic in 80s LA.

Yes, it’s Weekly Wonder Woman – keeping you up to date on pretty much anything involving DC Comics’ premier superheroine, including which Agatha Christie detectives she meets

It’s been a quiet-ish week for our Diana, now that the Blu-Ray release of Wonder Woman is finally done and dusted. James Cameron doubled down on his critique of the movie, but no one cares about that, do they? Meanwhile, with Justice League coming soon, Gal Gadot and the rest of the movie league have been explaining their characters to the Japanese.

But that was it really, as far as news went.

Still, over in comics, we had the conclusion of the Justice League/Mighty Morphin’ Power Rangers team up and there’s a new author on Wonder Woman – James Robinson. He’s picking up that Grail/Diana’s brother storyline that you thought had got left behind back in the nu52 at the end of ‘the Darkseid War’.

Here, let him explain what’s going on. See you in a mo.

END_OF_DOCUMENT_TOKEN_TO_BE_REPLACED

Well we’ve seen how the amateurs do it – now it’s the turn of the pros, because following NBC’s efforts at doing manly special forces operations with The Brave, we now have CBS’s rejoinder in the form of SEAL Team.

In an ideal world of course, they’d be calling it SEAL Team 6, but since History has already given us the almost identical Six, CBS presumably could only get custody of the first half of the name. Maybe this is SEAL Team 5.

Anyway, it’s basically The Unit again, as we get an elite troop of special forces blokes (and a woman) who have to take off at a moment’s notice to shoot people overseas. Against that backdrop, they have to juggle complicated home lives and the toll the job takes on them. The big difference? It’s that David Boreanaz from Bones and Angel in charge, not Dennis Haysbert.