It’s another wonderful month over in DC. Kind of. Ignore the fact it’s still Tony Akins doing the illustrations on Wonder Woman, since we have fights, innovation, ruses, New Gods and old gods to deal with. And I’m proved wrong – oops!

Meanwhile, over in Justice League, Aquaman does something useful for a change, we have some nifty Wonder Woman continuity references, Wonder Woman and Superman go on a date – and Batman is revealed to be a stalker, but we could have figured that out ourselves.

And then in Batwoman, Wondy and Batwoman talk a lot, we go off the reservation when it comes to Greek myth, before heading back to Gotham, and we learn that absolutely, definitely for sure, DC’s editors don’t talk to one another.

Wonder Woman #14
Plot
The First Born turns out not to be Kronos, as previously suspected, but the hitherto unknown first-born son of Zeus, who’s being clawing his way out from the Earth’s core for the last 7,000 years.

Turns out he’s the one who’s going to seize the throne of Olympus, according to the prophecy.

Up on Olympus, Ares is refusing to play ball with Apollo, who thinks he’s gone loopy.

Meanwhile, Wondy is trying to talk her new half-sister, Siraca the wind, into telling her where Hermes and Zola’s baby are.

Siraca’s a little distrustful because she hasn’t had a happy time of things thanks to Hera.

However, she can’t help so she sends Wonder Woman off to New York to meet another member of the family.

Meanwhile, back with the New Gods, Highfather is stressed.

Is it any good?
It’s surprising and action-packed for a change, but I do wish the Azzarello could just get on with telling a story – this feels like never-ending set up for some action that never arrives.

Individually, all the plot points are interesting. We have the first born, of course. Quite why ‘the first born’ would have been erased from history, given the things done by the Greek gods to avoid other more powerful heirs taking over from them that we still know about, I don’t know. Why he’d even be the first born given that Hera was Zeus’s third wife and so Athena, the Horai, Eunomia, Dike, Eirene and the Moirai, not to mention the likes of Apollo and Artemis through Leto (admittedly, they were illegitimate), would all have preceded him – or are we seriously going only with first-born son being legitimate here, because FYI both Kronos and Zeus were the last-born sons? – I don’t know either. Why you’d even have to have the concept of a sole heir for gods who never die and generally fight in order to win a throne is an intriguing question, of course.

Still, it’s an interesting innovation that’s comes out of nowhere to blind-side us and finally answers the question posed in issue #1 over who would try to take over from Zeus. There are echoes of Roman myth (being raised by animals) and Greek tragedy (Oedipus being left to be exposed on a hillside) in the story, but as with all of Azzarello’s myth-making, it’s very patriarchal pick-and-choose stuff, and overlooks the general suggestion of myth that each generation of god (and mortal) is weaker than the previous one and can only overcome it through greater cunning, rather than brawn. So not very authentic, but still intriguing and a nifty idea.

The Olympian stuff is also very patriarchal, all girls fighting or being looked after by their godly brothers, the gods the only ones taking action. Again, not exactly true to myth where generally it was the goddesses who got the gods to do things rather than vice versa, but hey ho, Artemis and Aphrodite never did get on very well, so I guess we can let it slide. But, even if it is a big patriarchal talkie scene, at least it fleshes out characters and gives Aphrodite and Artemis something to do, outnumbered as they are by loads of gods (again, not exactly keeping with myth).

The Wonder Woman fight with Siraca isn’t bad for nu52 Wonder Woman and is ended, once again, by Wonder Woman’s compassion, which is a nice touch. And although you do get an impression of Wonder Woman’s near indestructibility, it lacks pizzazz, nothing that you could describe as wondrous or incredible.

And the New Gods? Well, there’s not much here to really rankle, but I’m not looking forward to seeing silly sci-fi men in silly sci-fi helmets arriving.

Fortunately, some tribespeople turn up with a horn that messes with Superman’s hearing and renders him as docile as pussy cat. Friendly tribespeople then explain the true nature of the Cheetah and of the ‘Godkiller’ weapon that’s caused Barbara Minerva to become the Cheetah.

After the Flash gets beaten up by Cheetah, Wonder Woman manages to beat her up a bit then make Aquaman do something useful for a change.

Back at base, it’s revealed that Barbara Minerva wasn’t corrupted by the spirit of the tribespeople’s Cheetah god, but vice versa – she’d always been a criminal and duped Wondy.

Supes take pity on Wondy, who feels a complete idiot, and takes her off to rekindle her faith in the world and people – in a diner in Smallville. 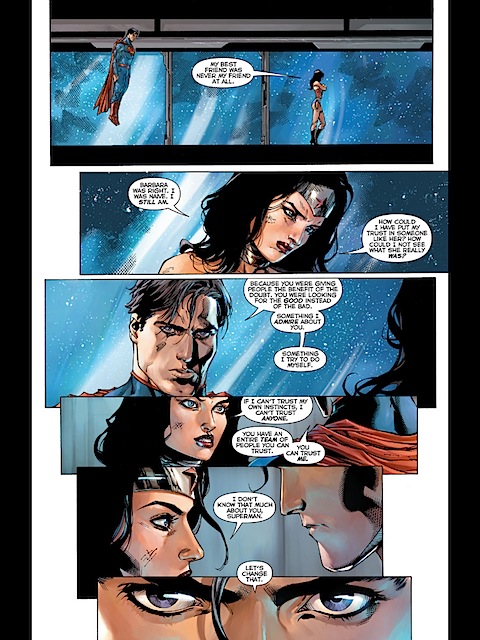 Feeling a common bond of goodness, things heat up in a nearby cornfield and…

Except, someone’s not to happy about that. All alone. Watching. In his rubber suit.

Is it any good?
Although, as usual, it’s pitched at 16 years old in writing style, this is an enjoyable issue. I’m much preferring Tony Daniel to Lee now on artwork, too. The Superman-Wonder Woman romance is handled tactfully and plausibly: two hurt good-hearted people trying to do their best for the world seeking solace in the arms of someone like-minded who can identify with their problems. We’ll have to see if they take up hobbies together or whether they’ll be able to go to a cinema some time – maybe Wondy will need a secret dating identity so she can go round Clark Kent’s place – but it’s starting off well at least.

Cheetah, while a little samey, doing the usual dice and slice job on Flash she did last issue, is shown to be a serious potential threat to most superheroes, rather than just a girl villain for a super heroine to take on, but not a challenge for real men. For long-time Wonder Woman fans, there’s a nod to the previous incarnations of the Cheetah from the Golden Age onwards: Priscilla Rich, Deborah Domaine and even Sebastian (now Sabrina) Ballesteros are all revealed to be aliases used by the criminal Minerva in her nefarious activities.

Although we get to see more of Superman’s side of things, this is once again largely a Wonder Woman comic (yey!). Cyborg gets to translate and make noises; Aquaman gets to pretend to be boss and sit at the bottom of a river, while Batman actually gives all the orders; the Flash gets chopped up a lot; Superman gets transmogrified. That’s about it for the rest of the Justice League. Clearly, Wonder Woman should have been made leader as she was in AmeComi Girls last month. She’s top.

Coming soon, though: The Trinity War (aka Batman’s jealous).

PS I should probably mention the supporting story, Shazam, which sees the return of Black Adam and is quite good from that regard. Not great and Billy ain’t doing much at the moment, but it’s okay at the moment.

PPS Anyone notice that Wonder Woman has shrunk since issues 3 and 4?

Batwoman #14
Plot
Wonder Woman and Batwoman have found Medusa’s son, Pegasus, who isn’t a winged horse but is a god with wings who lives in a trailer.

He’s not doing too well, after having been chopped up by Medusa’s other son, but he can reveal that the baddies are all back in Gotham. And Wondy, taking mercy on the immortal, chops his head off to spare him a lifetime of agony.

Back in Gotham, Medusa is making hydras from dragons, something that Wondy and Batwoman arrive just in time to stop. Probably. 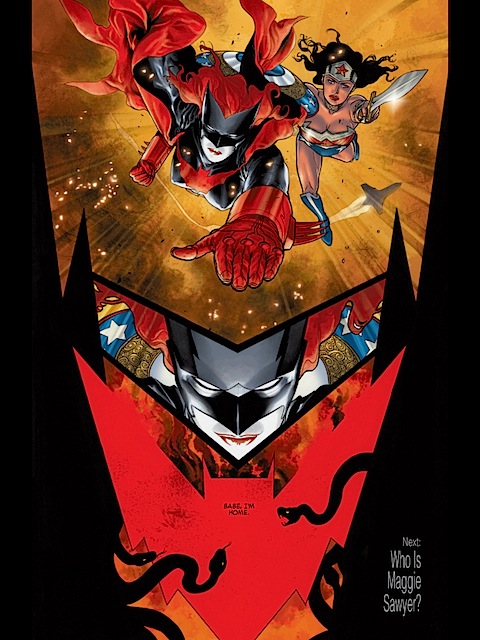 Is it any good?
While the artwork is as excellent as always, this really isn’t a good issue from a Wonder Woman point of view. As well as clearly having no idea beyond Wikipedia (perhaps even less than that, which is saying something) about Greek myth, it isn’t even compatible with DC’s own take on Greek myths. Immortals taking forever to heal? Really? Where did you get that from? Lennox healed up between issues 11 and 12 and he’s a demi-god. Wonder Woman heals in next to no time. Kronos has just clawed his way up from the centre of the Earth and only has a few scratches for the experience. And why is Pegasus a winged man now? No explanation.

Wondy is also a bit rubbish. Last issue, Batwoman had to save her from Nyx, something that Wonder Woman is supposed to be good at. Here, she snivels, worrying that everyone’s going to turn against her one day, and wishes she were as courageous as Batwoman. Oh please.

It’s been said that Batman is the most iconic of the DC characters, the one against whom all success is measured (this is literally true in the case of comic readership figures). When Superman used to visit Batman in his own title, you used to have a similar situation, with Batman the unpowered saving Supes from every bad situation because he was The Man; if DC are genuinely trying here to come up with a mirror female partnership – Batwoman and Wonder Woman to Batman and Superman – I really hope they steer away from that particular aspect of the relationship. It’s nice that they’re maintaining the idea that Wonder Woman, while compassionate, is one of the few superheroes who’s ready to kill if necessary, but really, they’re not treating the character with much respect here.

Every week, Weekly Wonder Woman keeps you up to date on everything involving DC Comics’ premier superheroine Movie news Justice League is out on DVD/Blu-Ray/4K this week. I’ve reviewed that elsewhere, and since there are […]

The news for Wednesday 26th January 2011