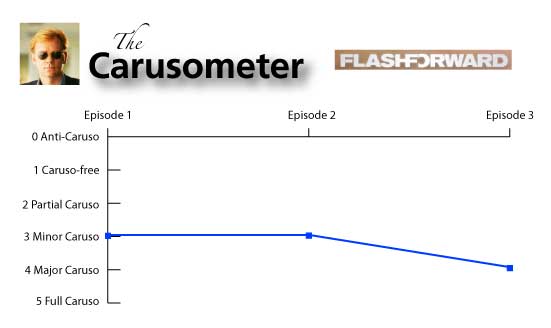 FlashForward is the new Lost. Apparently.

However, I distinctly remember Lost being interesting when it started – you know, having a decent set of characters, that sort of thing. That’s at least one differentiator between it and FlashForward.

Despite my misgivings about the show when it started, I’ve stuck with it. And you know what? My misgivings were right. I still don’t like it.

Episode two was almost a retread of episode one. We get everything we learnt in episode one repeated for us, just in case we’re really stupid, and the lifeless uninvolving, uncharismatic leads continue with their lifeless, uninvolving situations – apparently, the key to drama is for no one to say the blindingly obvious/anything important. Ethical dilemmas are all brushed under the carpet without real consideration – in contrast to Lost, where decisions have ramifications.

The one thing that kept me going after episode 1 was the hint that the central mystery – why everyone blacked out – might be intriguing. Unfortunately, so far, it looks really stupid. We’re getting references to kaballah and other bits of silliness that are way too reminiscent of John Doe for my liking.

So I’m going to give up on this one, I think, before I’m in too far and find myself 17 weeks from now still wondering what the mystery is yet unwilling to give up because I’ve spent 17 weeks watching it. Let me know if it gets interesting, will you?

Carusometer rating: 3
Rob’s prediction: If people are still watching by the end of the season, it’ll run forever