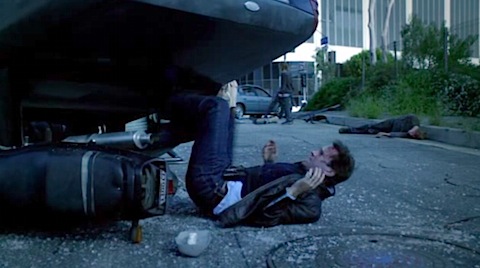 It can’t have escaped your notice that since Lost arrived on the scene five years ago, many shows have done their best to try to emulate it, both in terms of style and ratings. Every year, a new show is heralded as the new Lost, and this is the latest.

Short of crashing everyone involved in a weird desert island, you’d be hard pushed to find much different between Lost and FlashForward. The basic premise is that everyone in the world blacks out for about two minutes, during which time they have a vision of what their life will be like in six months’ time. No one knows why it’s happened, and everyone wants to know if what they’ve seen will come true or not.

For roughly 39 minutes of the run-time of FlashForward, I really wanted to flash forward as well – to a point in time when I wasn’t watching this. But then, somewhere towards the end, something interesting happened and I began to think there was some mileage in the show after all.

Plot
What if you saw your future 6 months from now? A glimpse of where you will be and who you will be with. Would you look forward to what was coming…or would you try to stop it?

A mysterious global event causes everyone to black out simultaneously for two minutes and seventeen seconds, and each person sees a glimpse of their lives six months from now. When they wake up, everyone is left wondering if what they saw will actually happen.

Los Angeles FBI Agent Mark Benford (Joseph Fiennes) is desperate to uncover why this happened and who or what is behind it. And he’s not the only one. Before long, everyone starts asking, “What did you see?” As Mark and his team struggle to figure out what caused this bizarre event, they begin to piece together the future by creating a huge database of people’s flash forwards from all over the world – The Mosaic Collective. No one knows what these flash forwards mean or exactly what the future really holds. But it is clear that across the globe people who’ve never met will somehow be intimately connected and will have an impact on each other’s lives in the next six months. Some will fear what’s coming, others excited; but not a single person will be unaffected.

Is it any good?
For a good portion of the episode’s duration, no it’s not. We’re introduced over the episode’s run to a number of people whose lives aren’t that interesting and who are very, very irritating. Sporting quite a phenomenal number of non-American actors, FlashForward gives us FBI agent Joseph Fiennes and surgeon Sonya Walger (both pretending to be American) as a married couple whose relationship seems fine now, but likely to fall apart in six months’ time. He’s going to start drinking again, while she’s going to start shagging Jack Davenport (not pretending to be American, thankfully, since we all remember what his accent was like on Swingtown).

John Cho, Fiennes’s FBI partner, is going to get married – except he didn’t have a vision, so maybe he’ll be dead in six months. Fiennes AA sponsor Brían F. O’Byrne (sounding Irish but supposed to be American, I think) has just buried his daughter who died in Afghanistan – except he has a vision of seeing her alive in six months’ time.

And I really didn’t care much for them. Any of them. Not even Cho. They have the emotional depth of a pot of peanut butter and the joie de vivre of cardboard. And no matter how many car chases and guns they stuck in the first half of the episode, I didn’t get very excited by it either, and it all felt as improbable and unrealistic as the ‘global event’ at the show’s heart or the ‘London skyline’ Alex Kingston (British) sits in front of at one point.

Even the central mystery didn’t look that interesting. Think about it. If it’s a one-off, we’re not going to be faced with Lost and its continually unravelling mysteries; we’re going to be faced with The Nine and six years of people with tedious emotionally issues, wondering whether they’re going to have that affair or not. The most the show could look at is whether a theoretical glimpse of the future would allow people to change their futures. Theoretically.

But then, right at the end, there was a glimmer of hope. Unlike the novel on which this is very loosely based (thankfully), it seems that the worldwide black out could be the result of deliberate human action and so could happen again.

Mardre mia – a mystery that needs investigating and exposing.

So while, on the whole, I found FlashForward to be a complete waste of my time, populated by flat acting and flat characters, I sense hope. There is light at the end of the tunnel. This could even be a new Lost.

But I’ve heard that one before.