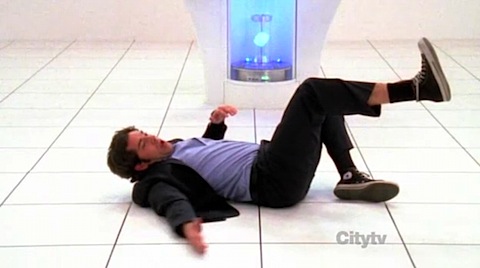 For me, Chuck‘s been an “if there’s nothing else on, I’ll watch it” kind of show. I watched the first few episodes of season one and thought that while it was okay – the idea of a nerd being accidentally turned into a spy not exactly being a new one (eg Jake 2.0) – it wasn’t really for me and gave up on it. Then lovely wife started watching it on Virgin 1 and before you know it, we’re watching it every week.

Season two has been okay. With Chuck, there’s a hell of a lot of water being tread – it’s always reasonably good, just never excellent. Chuck never leaves his job at the Buy More to get a new life, or if he does, he’s back within an episode. He and Sarah, his secret agent handler, never get together, except if they do, they have to return to a platonic status quo within an episode. The ‘top’ spies, even the guest ones, are never that good and would get turned into mincemeat by the guys of The Unit, Michael Westen on Burn Notice or Daniel Craig as James Bond without too much of a problem. And even the few revelatory bad things in Chuck or Sarah’s past (Stanford, Jill, his father, her father, Bryce) turn out to be not as bad as previously though, depriving the show of any true edge.

Okay, so there’s a place for “not too much thinking after a hard day at work” escapist television and to a certain extent, this is more of a show about camaraderie, family and disappointment in life than about spies, but it’s not without reason that even lovely wife is saying things like “something had better happen soon”.

Whether Chuck will get that option, since it still hasn’t been picked up for a third season, is a tricky question. But although it looks like there’s a real risk of a return to something like the status quo if it does come back, the season finale – really a two-parter in disguise if you include the preceding episode – is something of a game-changer, at least in some ways.

END_OF_DOCUMENT_TOKEN_TO_BE_REPLACED

Apparently, you have to dress like a Graeco-Roman goddess if that happens.

Have you seen Ali Larter acting randomly? If so, let us know and we’ll tell everyone about it in “Random Acts of Ali Larter“

I’m confused. This is a review of a DVD that contains an extended version of the pilot episode of Battlestar Galactica prequel Caprica, which won’t be transmitted until next year. So is it a preview or a review?

Whatever it is, let’s begin.

Science fiction is a lot of things to a lot of people. It can be space exploration, like Star Trek; it can be alternative reality fare like Eureka; it can be science extrapolation like The Six Million Dollar Man.

Battlestar Galactica is loosely credited with revitalising science fiction, taking the dull, lifeless and artificial people and situations of Star Trek and replacing them with a dark, gritty, quasi-realistic examination of the horrors of war. But BSG only really addressed one category of science-fiction.

Caprica takes away the war, combat and exploration of BSG to revitalise another vein of science fiction: what another, futuristic society might be like. More of a soap opera concerned with relationships and the nature of belief and society than with spaceships and war, Caprica isn’t really like anything you’ve seen before – although it’s probably like something you might have read.

The burning question: do we have a soul and if we do, can it be copied?

END_OF_DOCUMENT_TOKEN_TO_BE_REPLACED

Time for our regular look at what’s on at the South Bank in London in June. Not much, basically, but here’s what I found:

For those that want the full description of that Torchwood episode (why?), here you go:

1965: Twelve children are gathered on a deserted moor, before being surrounded by a harsh, bright light… and then they are gone! Today: All over Earth, children stop moving. Stop playing. Stop laughing. Then, as one, they begin to speak with the same voice, announcing the imminent arrival of a new alien threat. ‘We are coming…’ As the British government closes ranks, it issues a death warrant against Captain Jack and Torchwood…

Anyone want to help out?

There’s also a “Jazz at Ronnie Scott’s” season, but if you think I’m wasting more than a nano-second on that, you’re wrong.

As always, visit the BFI web site for more details