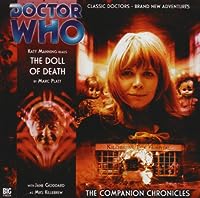 It’s going to be interesting to see how the crop of companions from nu-Who are regarded in 30 or 40 years’ time. As much as Rose might be loved and Martha disliked now, will time swap them in future generations’ affections?

Take a look at Jo Grant, one of the third Doctor’s companions, for example. Brought in to appeal to kids in a way connoiseur’s companion Liz Shaw was unable to, Jo Grant was very popular during her stint on the show.

Now, she’s reviled as a brain-dead waste of space and a retrograde, anti-feminist step on the part of the producers, who had also wanted a companion who needed saving and had to have everything explained to her – and Liz Shaw is revered by anyone with any sense.

But Big Finish is here to save the unsaveable. It made Colin Baker and Bonnie Langford popular. Surely it can make Jo Grant interesting for one of its Companion Chronicles. Can’t it?

Plot
“Retrocausation! Events before their cause. Time in reverse.”

While investigating a temporal anomaly in Central London, the Doctor and Jo Grant meet Professor Harold Saunders, a man who possesses an unstable alien artefact, and who is seemingly haunted by the ghosts of dolls.

Who is the mysterious Mrs Killebrew? Why is a pack of hounds hunting them in reverse? And can Jo pick up any bargains while backwards shopping on Oxford Street?

Is it any good?
With anything by Marc Platt, you can usually assume a couple of things. It’s going to be well written and have an interesting central idea. It’s also going to be over-written and far too long.

The Doll of Death is no different. Although, once again, we’re not exactly sure why the companion in question is telling us the story (she’s supposed to be blogging the whole thing. Seriously?), it’s a pretty good re-capturing of the Pertwee era in many ways, from the sound design to the general tone of the play in which the Brigadier is an arse, the Doctor is an establishment git trying to con his way off the planet and Jo’s a trusting idiot.

Where it isn’t very Pertwee is that the central idea is just too complicated and too involved. It’s a good idea, one that probably works better on paper than in audio, just not really in keeping with the Pertwee era style (unless you count about 1 minute of Inferno).

The story’s also too long, well over the normal hour, and I found myself bored by the end of it. It doesn’t really tell you much about Jo that you didn’t know before either. It certainly hasn’t redeemed her as a sensible character in her own right.

An above average entry in the range, but not one that’s worth getting unless you’re a foolish Grant fan.

The news for Wednesday 10th February 2010

Now Doctor Who goes 16-bit, too

Doctor Who as a 16-bit video game