When I did “Liz Shaw’s Best Bits“, an in-depth look at the highlights of best Doctor Who companion ever Liz Shaw’s reign on the show (and beyond), I thought I was done. Five parts, four on her season seven stories, one on what happened after that, and that was Liz done, I thought. A shame, but that’s all there was.

But you can’t keep a good companion down, particularly when fanboy Russell T Davies is in town and he’s pissed off with all those New Adventures writers who gave companions unhappy endings. As you may recall from part five of Liz Shaw’s Best Bits, David McIntee Jim Mortimore was the man who decided to kill off Liz Shaw in the novel, Eternity Weeps, having her die in 2003 from a virus she contracted on the moon.

However, Russell T Davies, who recently returned Liz Shaw’s successor, Jo Grant, to the world of Doctor Who in the The Sarah Jane Adventures story The Death of the Doctor, also took time out in the story to let us know what happened to Liz Shaw:

Yes, boys and girls, Liz Shaw is alive and well and helping to save the world from aliens from up on UNIT’s base on the moon. It can’t be mere coincide that Rusty chose to tell us she was up there: that was a man saying “No! Enough is enough!” to Eternity Weeps. So Liz probably took a Lemsip and got over McIntee’s Mortimore’s virus, before going back to work the next day.

That’s Liz for you.

UPDATE: Thanks to @thejimsmith for pointing out I can’t even read book covers right and it was actually Jim Mortimore who wrote Eternity Weeps. Will I never be free of this name-mixing affliction?

When last we saw Liz, back in Inferno, she seemed quite happy:

After all, in her four season seven stories:

That’s pretty damn good, isn’t it? She’s the Cathy Gale of Doctor Who there. She’s saved the world in every story, she’s got to have car chases, be a CSI, and learnt how to rewire a time machine. More than that, she’s been an equal partner with a Time Lord, filling in the gaps in his knowledge and intuition with her own knowledge and intuition. Would you want to give all that up? Clearly not, judging by that last scene of Inferno.

And yet, by the next season, she’s gone – to be replaced by Jo Grant in this travesty of a scene from Terror of the Autons. Prepare to groan as the entire series takes a massive quality nose-dive:

But what happened to Liz Shaw next? Well, follow me as we take a wander through Mawdryn Undead, The Five Doctors, Dimensions in Time, the P.R.O.B.E series of movies by Mark Gatiss, and a terrible, terrible UNIT cover-up.

END_OF_DOCUMENT_TOKEN_TO_BE_REPLACED

It’s the end, but the moment has been prepared for. We’re now at the last in our four-part series about the first Jon Pertwee Doctor Who companion, Liz Shaw – probably the best companion the show ever had. A Cambridge scientist with degrees in practically everything, she could have probably have saved the world all by herself: it’s just the Doctor had a few shortcuts that helped out.

Inferno was the only Liz Shaw story that didn’t follow the templates set by the old Quatermass serials, instead pioneering a whole new area of science fiction for Doctor Who – the parallel universe. Yes, if you thought nu-Who with its universe populated by Cybermen and Rose Tyler shagging a half-human Doctor was the first time we’d seen a parallel Earth on Doctor Who, you’d have been wrong.

So get ready not just for Liz Shaw’s Best Bits but also Section Leader Elizabeth Shaw’s Best Bits after the jump, where we’ll also answer the question: were the Doctor and Liz Shaw shagging?

END_OF_DOCUMENT_TOKEN_TO_BE_REPLACED 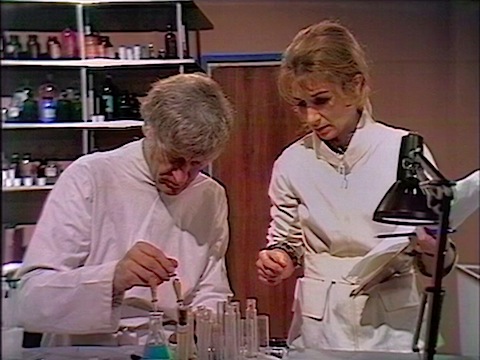 We’re now over halfway through our low-budget, four-part series showing the best bits of premier Doctor Who companion Liz Shaw. Liz appeared during the first season of Jon Pertwee’s reign as the Doctor 40 years ago and is still unmatched when it comes to being the smartest, most assertive, most useful, most adult of all the Companions Who.

After last week’s look at her introductory story, Spearhead from Space, we look at what is the first of the “true” season 7 stories and the only one to really give the game away about the Doctor’s real name, Doctor Who and the Silurians. And since this is Liz Shaw’s best bits, I should point out that Liz Shaw uses science to save the entire human race from destruction by plague and takes control of a nuclear reactor – top that, Peri.

END_OF_DOCUMENT_TOKEN_TO_BE_REPLACED

On Friday, we started a new, low-budget, four-part series that aims to show the best bits of premier Doctor Who companion Liz Shaw, who appeared during the first season of Jon Pertwee’s reign as the Doctor 40 years ago.

Last time, we did The Ambassadors of Death, her third story, purely because I think it’s the second-best Who story ever, but this week, we’re going to go back and do things chronologically and look at her – and Jon Pertwee’s – first story, Spearhead from Space.