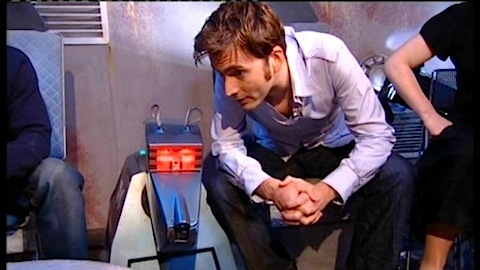 Time got away from me on Friday, but before I head off out the door today, I thought I’d leave you with this week’s top picture of David Tennant sitting down, just so you have something Tennanty for Valentine’s Day.

It’s been provided by new arrival Rachel, who I’m sure is going to give you picture-providers a run for your money, judging by some of the other pictures she’s sent in. I have some ideas what David’s saying to K9 in this picture, none of them printable, so I’ll leave the captioning to you guys.

Meanwhile, over in Sitting Caption land, look at the enthusiasm. I feel like that bloke in Spartacus – a little crack of the whip is all you guys need to motivate you it seems. Or maybe I’m thinking of Calamity Jane and Doris Day. It was a hard one to judge this week, but Electric Dragon’s magnificent effort won the day in the end. Well done to everyone who contributed and good luck with this week’s.

Every photo displayed on Monday (one per person who sends one in) gets five points; the best pic in the stash each week will appear on Friday and get ten points.

You can also enter the witty and amusing captions league table by commenting on Friday’s Sitting Tennant photo, the best caption getting 10 points, everyone who contributes getting five points.

What have you been watching this week? (w/e January 22)