Three episodes into The Brave and it’s a little unclear what The Brave actually is. Ostensibly, it’s about a group of special forces operatives run by analysts at Anne Heche’s Defense Intelligence Agency. The analysts sit in front of monitors, watching drones and having tense phone calls and meetings with other agencies; meanwhile, the plucky team of mostly ex-SEALs go off to Syria, Mexico, the Ukraine et al to do… stuff.

But the show’s a little unclear what the exact nature of that stuff is. The first episode was a somewhat typical NBC stab at action, with our team performing a hostage rescue. Basically, the kind of thing that Delta normally does. Clunky and desperate to put all its pseudo-conservative but essentially liberal cards on the table, it spent most of its time justifying the presence of a Muslim and a woman on the team, while getting one of the other characters to have theological debates – all while team leader Mike Vogel gets to be all-American and heroic. Indeed, so fixated was the show on character over identity that it was actually quite possible to miss that there was another member of the team (Noah Mills) – I barely noticed he was there until the second episode.

That first episode ended on a pretty spectacular cliffhanger… that episode two promptly ignored. Well, not quite ignored but a quick mention at the top of the episode in which everyone explained how upset they were by what happened was as much as the show seemed to care about it. Whether that was a pure gonzo attempt to get commissioned (“Please pick up this pilot to series, Mr/Ms Commissioner, so you know what happens next… Thanks!… Ha! Ha! Fooled you!”) or to reboot the show in a different direction without wasting any time on the rest, I can’t say, but episode two then gave us an attempt to do a straight spy piece, with our heroes skulking around the Ukraine trying to find a missing CIA agent, while Russian spy hunters try to get to her first.

A far better episode than the first had led us to believe the series would be, it was actually joy exciting, smart and tense. Again, a bit more Delta than SEAL work and while the dialogue thankfully avoided reducing everyone to their ‘identity’, it was all a bit clunky and implausible. Nevertheless, a good, escapist bit of fun.

Which then takes us to episode three in which they head off to Mexico to bug an arms dealer. So are they Delta or SEAL in this? Turns out they’re Impossible Mission Force, since despite looking like SOFs and not including any Latinos (or even Spanish speakers) in their numbers, the whole episode hinges on their ability to go undercover and do some pickpocketing. Where’s the CIA when you need them, hey? Also given that their idea of surveillance consists of standing up on top of buildings in fatigues with their optics in full view, you’d hope they’d at least have some implausibly good latex masks to help disguise themselves later, but apparently not.

I ended my review of the first episode by suggesting that whatever rival show CBS produced, it would be better than The Brave. And SEAL Team is. Technically. It has colossally better production values and far more imaginative direction. It’s also far more realistic and it confines its SEAL team to doing things that SEAL teams actually do.

Yet it’s also monotonous and its characters are pretty flat. In comparison, The Brave may look cheap and nasty and not have even the vaguest notion of reality, but it’s more varied, more exciting and more engaging than its CBS rival. The characters are still so thinly drawn that I couldn’t tell you one thing about them and if it saved up its budget for a year, it might be able to afford to rent the Black Hawk that SEAL Team conjured up for its first episode. But I actually do want to watch the next episode of this, which isn’t something I’ve yet felt with SEAL Team‘s almost algorithmically derived plotting and characterisation.

The Brave‘s biggest problem is that it’s about the special forces. If had been about a team of spies, it could have shirked off most of its problems from the outset. But that’s what trying to appeal to Trump voters will do, if you don’t really understand what you’re doing*. If it can dial down the military angle, amp up the intelligence angel, it could be a halfway decent action show. It’s certainly better than Taken. Here’s hoping.

* This could be because it’s from NBC. Or it could be because the production company is Keshet International and most of the exec producers are Israeli, so are basing the series to some extent on the IDF’s Duvdevan (cf פאודה (Fauda)) 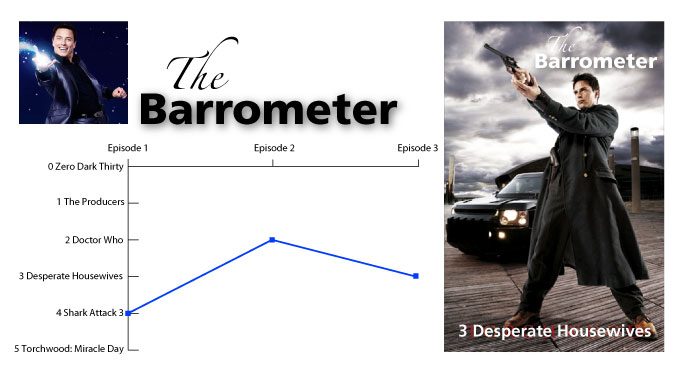