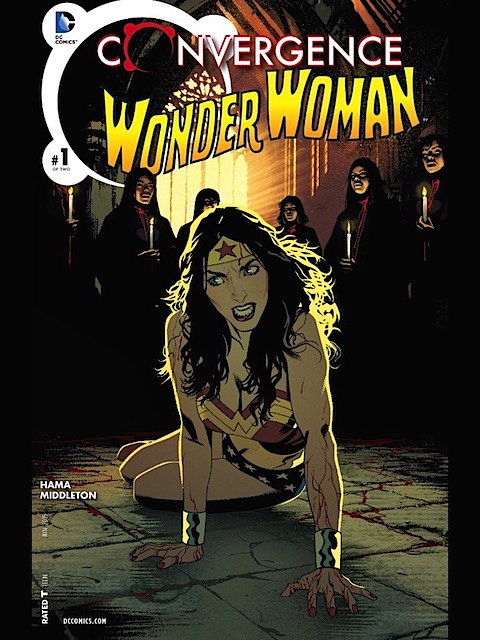 The death match that is Convergence is now well under way at DC. No, really, I’m not being metaphorical. It really is a death match – all superheroes from all DC continuities are stuck under domes and are being asked to fight one another to see who’s the winner.

You’ll find out after the jump, although the true Wonder Woman nerd will be able to tell from the typeface used on the cover above who it is.

After getting dressed, she heads off to help little old ladies get to church.

There she meets some odd Christians.

And the voice of Convergence reveals the plot, prompting the Christians to knock out Wonder Woman and throw her in the crypt, because she’s pagan.

But what sort of fight would it be if Wonder Woman didn’t have her powers? The Convergence boss, Telos, returns her Amazon strength to her.

Unfortunately, it’s Convergence, so vampire versions of Joker, Poison Ivy and Catwoman have arrived and they’re not being nice to Etta Candy and Steve Trevor, who have come to help Wonder Woman.

Fortunately, Wonder Woman’s ready to save the day again.

Is it any good?
It touches on some interesting themes, such as Diana and Steve Trevor’s relationship and Wonder Woman’s paganism, but unfortunately, we’re in the same territory as Injustice: Gods Among Us, with a big engineered fight fest between superheroes, compounded with the fact these are all characters from previous, much-loved continuities who perhaps could have been left to rest in peace happily.

For those of you who didn’t get the groovy 70s typeface hint, the Wonder Woman we have here is the Volume 1 Wonder Woman of Denny O’Neill. 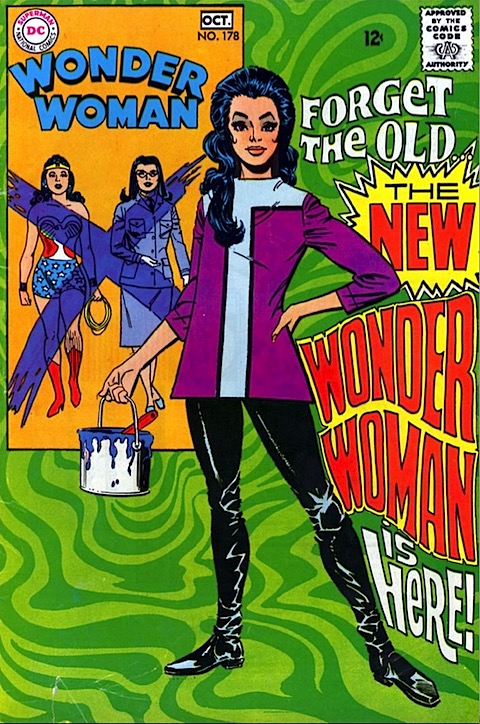 For those of you unaware of that particular continuity (and DC does provide a handy guide at the end of Convergence: Wonder Woman #1 for some of its key points…)… 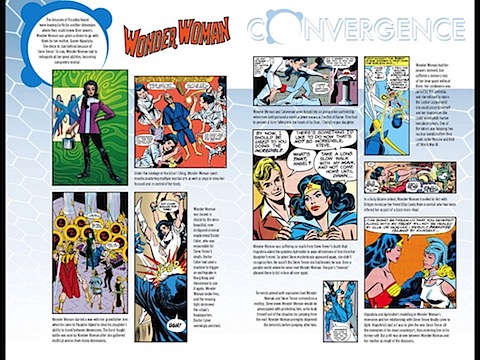 …essentially, Wonder Woman gives up all her powers, gets trained in martial arts by Eastern stereotype I, Ching, and goes around fighting crimes and cults wearing groovy threads and a white Emma Peel catsuit. It’s a continuity that ran into a lot of stick for depowering Wonder Woman, particularly once Ms magazine put her on its first cover (“Wonder Woman For President!”), but nevertheless was very popular, particularly among girls who liked the new look and attitude, so ran for a few years and is one of the reasons why the Cathy Lee Crosby TV Wonder Woman wore a tracksuit and had no powers, either.

O’Neill, whose run on Batman was rightly lauded, did actually write some decent, exciting plots for Wonder Woman. Here, though, in an issue written by Larry Hama and drawn/coloured by Joshua Middleton, we get some of his lower points crossbred with some tedious DC darkness. While it’s interesting to see Diana and Steve together and in a relationship, as was the continuity of the time, the somewhat pretentious opening feels like wasted scene-setting and a wallowing in novelty, rather than an attempt to give us an excerpt straight from either the relationship or O’Neill’s more colourful style.

On top of that, we then go into unsubtle territory with the rabid pagan-hating Christians, before we get a bunch of vampires killing off/turning much-loved members of Wonder Woman’s entourage. While Steve Trevor and Etta Candy both have a habit of returning from the dead, it all feels a little unnecessary and a summation of DC’s current problems: gritty darkness eliminating all joy and fun from stories. Convergence was initially supposed to be just a few lovely homages to continuities past; now they’re all trying to kill each other in gloomy death matches. Haven’t we had enough of that with Injustice: Gods Among Us, Futures End, Superman: Doomsday, etc?

Middleton and Hama do give us a decent fight scene, although not one really in O’Neill’s 70s, Kung Fu/Avengers-influenced style, but all the same, it doesn’t leave me really wanting to read the second part.

Fortunately, Wonder Woman arrives home just in time to save the day.

But there’s an intruder in the forest… Poison Ivy!

Diana overpowers her, but Ivy just wants to talk… and she ensures Diana listens.

Gaia has told her that Typhon is arising from under Paradise Island.

That means Poison Ivy and Wonder Woman must stop him – so they head into battle under the Earth together!

Is it any good?
Tom Fowler’s artwork leaves a lot to be desired, but the story by Derek Fridolfs is actually quite good.

Fridolfs appears to draw from several continuities for the story – children on Paradise Island would suggest nu52, some of the costumes of the Amazon, Hippolyta and Wonder Woman would suggest post-Crisis, as would Poison Ivy’s abilities with the Green and the Amazons’ beliefs about Gaia, while other costumes suggest all-new continuities – which gives us the surprising pairing of Ivy and Diana, and a chance for them to learn from each other.

There are some generally cool moments, including the return of (a version of) the ‘screaming chicken’ armour…

…and general bonus points for bringing in Gaia and Hippolyta’s Pegasus. There’s some Greek myth used accurately (Typhon) – although references to his being a dragon, suggest I’ll be docking marks next week.