Hugh Jackman is Wolverine. Hugh Jackman sings a lot in musicals. What’s more natural than Wolverine: The Musical, then? 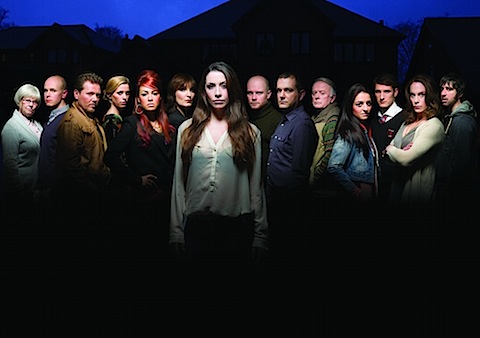 In the UK: Sundays, 9pm, S4C. Available on Clic

S4C’s last attempt at a drama that would appeal to everyone who wasn’t a Welsh speaker was Y Gwyll/Hinterland, a sort of Welsh Wallander. It was actually pretty good and as a result, it got a whole load of people watching the channel who normally wouldn’t have tuned in, spelling record ratings and a recommission for the show.

Gwawr Martha Lloyd, S4C’s drama content commissioner, is a smart enough cookie not to simply drop the ball and leave Y Gwyll as a one-off, so now comes 35 Diwrnod, written by award-winning authors Siwan Jones and Wiliam Owen Roberts. As is probably no surprise to Welsh speakers, a big surprise to everyone else, it focuses on 35 days in the lives of the people living on a South Wales cul-de-sac. But it’s a very particular 35 days – it’s the time between Jan Richards (Lois Jones) moving onto the estate and her murder. In fact, the show starts on day 35 with her death then the rest of the show flashes back to show the events leading up to it. All the viewer has to do is work out whodunnit.

In contrast to Y Gwyll, which was immediately compelling and had a very distinct tone and feel from the first moment, 35 Diwrnod is a bit more of a melange. There’s domestic bliss, domestic hell, family life and everything you’d expect of a South Wales estate, particularly one where you need to have a wide variety of potential suspects for the murder. But then there’s drug raids and references to The Shining. Since it’s South Wales, there’s a lot of loan words from English interspersed in the Welsh dialogue with one Welsh speaker practically speaking English at one point (“…crack cocaine… prison warden… stupid…”), which is either humorous or helpful, depending on your point of view.

It’s a bit of a slow build and the change of tones is disconcerting. But it is engrossing and well shot and there are enough mysteries for any armchair detective to enjoy. Will you work out who the murderer is before the end?

The usual “TMINE recommends” page features links to reviews of all the shows I’ve ever recommended, and there’s also the Reviews A-Z, for when you want to check more or less anything I’ve reviewed ever. And if you want to know when any of these shows are on in your area, there’s Locate TV.

I’ve still got S4C’s 35 Diwrnod to watch – hopefully, I’ll get a mini-review up later today. But I did also watch:

Inspector De Luca (UK: BBC4; Italy: Rai 1)
Breaking Sky Arts’ stranglehold on South Mediterranean TV again, BBC4’s managed to find this 2008 series from Italy, based on Carlo Lucarelli’s series of books. Set in fascist Italy during the 1930s, it’s actually very good. Although the hero’s a bit rubbish, he’s tenacious and interested in serving justice at a time when justice and the law could be very different creatures. The show has a real feel for both place and period, will little touches such as dogs named after Haile Selassie, the Italian version of the Hitler Youth, torture and more all making an appearance, even if Il Duce himself doesn’t. It’s also quite chilling in its depiction of life under fascist rule. Well worth a watch, even if there’s an obvious bit of bad dubbing and a truly awful soundtrack.

I also watched a movie:

Captain America: The Winter Soldier
Easily one of the best and smartest of the Marvel films to date. It’s a slight cliché, particularly thanks to the presence of Robert Redford, to say that it’s like a 1970s conspiracy theory movie, but it very much is, particularly The Parallax View and Three Days of the Condor. And with Captain America representing 1940s morality and having to deal with an age of profiling, drone warfare and more, it’s not just an interesting critique of the Marvel Universe, it’s also a critique of American domestic and foreign policies of the past couple of decades.

Of course, it’s still comics based, so there are nice little hat tips here and there, not only to the existing Marvel Cinema Universe (Iron Man, Hulk and others all get talked about) but to bits yet unseen – Dr Strange even gets name-checked at one point and then there’s the teaser for Avengers 2. Best of all, as well as the quite brutal car chases and fight scenes, which 3D ruins so watch it in 2D if possible, we do get lots of Black Widow (hoorah!) even if her more interesting comic book background has been ditched. And you’ll never look at Jenny Agutter the same way again. Heartily recommended, particularly because the ending utterly messes up Agents of SHIELD.

After the jump, the regulars, with reviews of Crisis, Secrets and Lies, 19-2, The Americans, Arrow, The Blacklist, Community, Continuum, The Doctor Blake Mysteries, Hannibal and Suits

END_OF_DOCUMENT_TOKEN_TO_BE_REPLACED

Time for our round-up of Wonder Woman’s appearances in DC comics this week. Just a couple of cameos this time round. Forever Evil: ARGUS #6 continues where #5 left off – Steve Trevor on a quest for Wonder Woman’s lasso, which is currently in possession of Wonder Woman’s former friend and now arch nemesis Cheetah. Once again, most of it consists of Trevor trying to prove absolutely definitely that he’s not just Diana’s ex-boyfriend; once again, I think he doth protest too much.

In particular, thanks to the arrival of the DC Universe versions of the Morai/Fates… 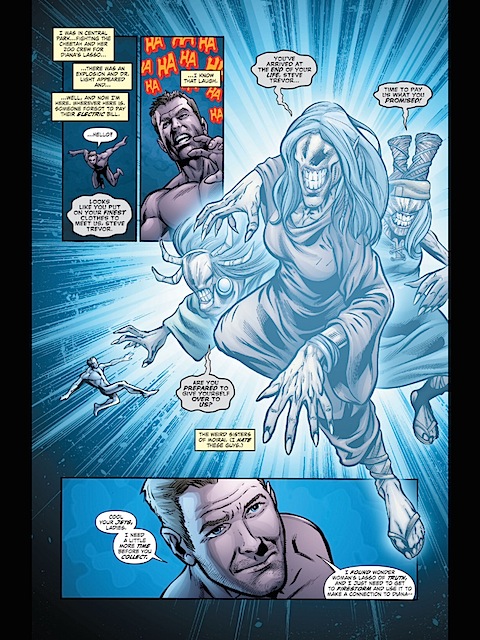 …we have a flashback to a point during the recent ‘Trinity War’ – where incidentally we learn that when Wonder Woman’s using her own lasso, she can’t lie either – when Steve asked Diana if she loved him. This is probably not the answer he was looking for, though:

Ouch. But pick your moments, Steve. 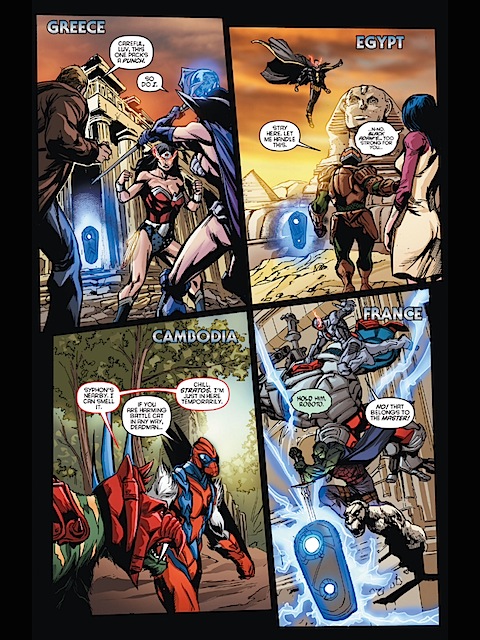 …which is nice. But beyond that, she’s largely there to offer Batman help with the redecoration.