It was a relatively quiet week last week for our Diana… if you discount the massively big spoilers for Wonder Woman that a French magazine has revealed (I’ll spoiler cloak them for you if you don’t want to read them):

Anyway, if true, that’s an interesting amalgam of all the Wonder Woman origin stories, including Greg Rucka’s current one and even Joss Whedon’s failed movie script, that’s probably going to annoy every fan with a minimum of one detail – you pick which one annoys you most – not least because it’s now about a couple of gods rather than at least one goddess. Let’s see how it all pans out on-screen, though.

In comics, there’s not a been much new. The first issue of Justice League/Power Rangers turned up but beyond the alternative cover, no Diana.

She calls on gods, he calls on the power of a T-rex. Meet Jason, the Red Ranger, in JUSTICE LEAGUE/POWER RANGERS! http://bit.ly/2jc8SEt

That means that after the jump, we’ll be looking at Wonder Woman (Rebirth) #14, Batman ’66 Meets Wonder Woman ’77 #4 and Justice League vs Suicide Squad #4, but not necessarily in that order. See you in a click.

What does Diana do?
Together with Harley Quinn, Diana faces off against Johnny Sorrow and his Army of Monsters. No one can look on Sorrow’s face without going mad, but Harley’s mad already, giving Diana time to do a Medusa on Sorrow.

The two teams defeat the baddies, but oh noes! Max steals the Eclipso Diamond and puts the Justice League under his control, with Diana not getting a good deal from the new situation (let’s hope not a full Marvel’s Jessica Jones). 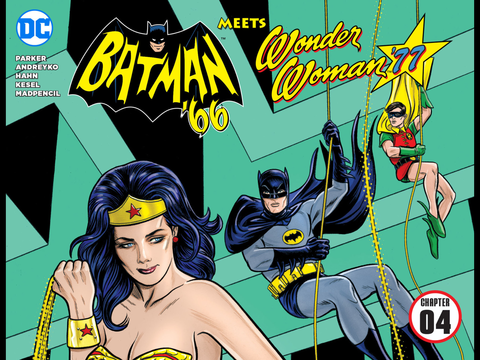 Batman ’66 Meets Wonder Woman ’77 #4
Plot
Back during World War 2, the Nazis continue to try to get their hands on that book of ancient things. In 1966, Batman determines he needs to warn Wonder Woman and the Amazons that Ra’s al Ghul now knows the location of Paradise Island.

What does Diana do?
She saves Etta…

She talks to some bats, who tell her that Bruce has fallen into the future Batcave.

But she doesn’t give Bruce her autograph.

Extra notes
Quite a jaunty little issue that rounds off the flashbacks to WW2 and which is chock-a-block with backstory for both Diana ’77 and Batman ’66. Lovely to see all the earlier characters, such as Martha Wayne and WW2 Etta, too. But the Nazis’ German is just rubbish.

Any opera-lover can tell you that, yes, ‘Fledermaus’ means bat. But it’s just one bat. Fledermäuse is bats. Or FLEDERMAEUSE if you’re going to speak in capitals like a proper Nazi.

Wonder Woman (Rebirth) #14
Plot
Ares twats Steve Trevor and Diana around a bit. Then Diana saves the world from Ares.

What does Diana do?
She ‘submits’ to Ares to protect Steve and the rest of the world from Him – by allowing him to search her mind for the location of Themyscira. 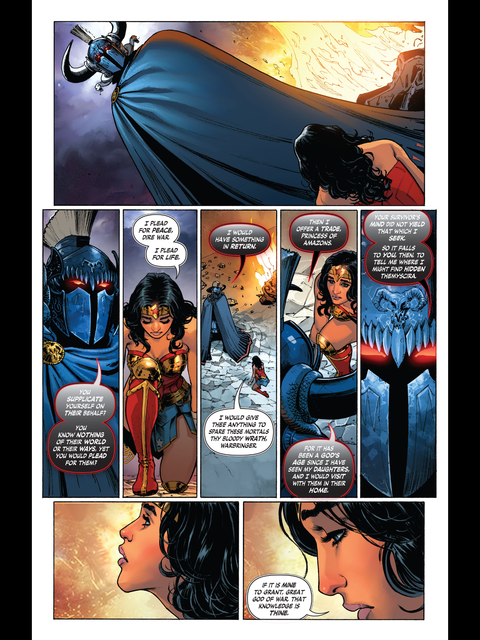 Except what He doesn’t know is that Diana has had her mind wiped of its location. 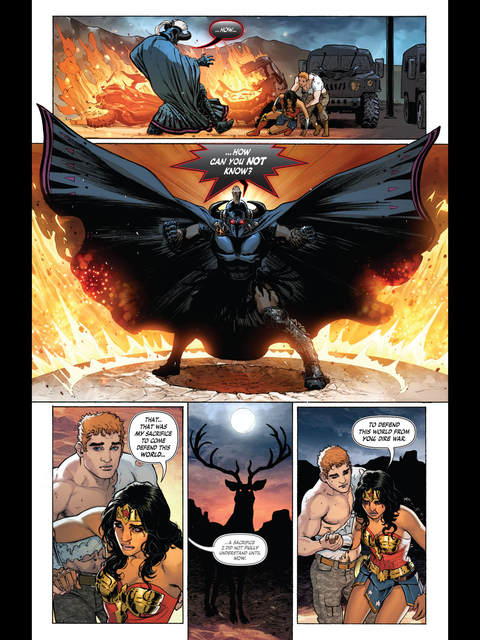 Then she vows to take back the world from Him, something the attending gods decide to help her with.

And then she goes all around the world saving people from Ares’s scheme.

For which she is duly recognised!

Extra notes
All in all, a very lovely origin/prequel story by Greg Rucka that will probably rank as the best of the many origin stories Wondy has had, assuming the vexing question of exactly how much of it is true/replaces the nu52 and other continuities is ever settled satisfactorily. And as an issue, full of lovely little moments, some of which could also be quite important:

All in all, great.

Yay! Gina Carano is going to be in Almost Human