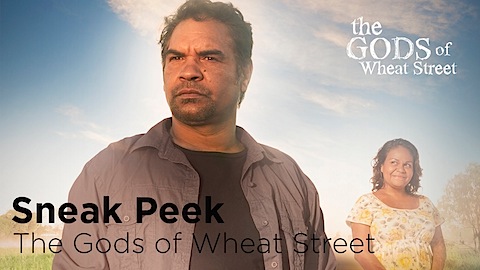 So there’s this guy called Odin who lives with his family on Wheat Street*. Well, he lives with Athena, Electra, Tristan and, erm, Libby; his brother Ares is in prison while his sister Isolde lives round the corner. His mum, Eden, is dead, so she only drops round to give advice from time to time.

From all that, you might think you have ABC1’s The Gods of Wheat Street correctly pegged as Australia’s answer to The Almighty Johnsons. But you’d be completely and utterly wrong.

Because, beyond the names of gods and heroes – and the occasional visitation by the dead – this is largely a six-part Aboriginal soap opera from the people who gave us Redfern Now, both in front of and behind the camera, but without the benefit of Jimmy McGovern’s guiding hand.

Once you get over that basic misdirection, it’s not that bad. It’s a drama about finding hope, having dreams and wanting more in life in small-town Australia, even when you’re poor and it looks like life is trying to kick you in the you-know-wheres. There’s a certain nominative determinism to the plot: Odin is the all father who tries to keep his family together, despite not having any money, his employer having just died and pretty much everything being up for sale; Ares is always in fights; Electra has daddy issues; Tristan would do anything for love; and so on.

But it’s not great. The acting by most of the leads is not so much convincing as earthy. The dialogue has the occasional laugh. The writers aren’t afraid to look at issues like domestic violence, racism, violence against women and everything else you might expect given the set-up they’ve created, but they’re more interested in regular-type people with regular-type ambitions – doing well at school, going to college to study fashion, looking after the family, finding a boyfriend or girlfriend, and so on.

I do find myself slightly compelled to watch the second episode, but only slightly. If you’re Australian, the show might well be of interest to you, even if it is all a bit worthy; but outside of Australia, most viewers are going to be hard-pushed to find much to watch in The Gods of Wheat Street beyond a mildly amiable drama about mildly amiable people.