Possibly – indeed probably – the worst TV fight ever was in the Star Trek episode Arena, which featured Captain Kirk in the slowest hand-to-hand fight with anything, let alone a giant lizard-like Gorn, in recorded history.

Well, praise be! William Shatner and a Gorn were reunited earlier this year to re-enact that fight and it’s even more awesomely bad now.

It’s “What did you watch last week?, my chance to tell you what movies and TV I watched last week that I haven’t already reviewed and your chance to recommend things to everyone else (and me) in case I’ve missed them.

The usual “TMINE recommends” page features links to reviews of all the shows I’ve ever recommended, and there’s also the Reviews A-Z, for when you want to check more or less anything I’ve reviewed ever. Since I was a bit more on the ball last week than the week before, I’ve reviewed elsewhere the following new shows:

Still in the viewing queue, though: Isabel on Sky Arts and Mysteries of Lisbon, which is on on-demand at the moment but starts tomorrow, also on Sky Arts; as well as ABC’s Betrayal, which began last night, and HBO Asia’s first original TV series Serangoon Road.

I should point out that the final episode of The IT Crowd was great, a fitting conclusion to the series, and that we probably own a copy of Textile Merchant – Norfolk Expansion pack somewhere.

Shows I’m watching but not necessarily recommending
The Bridge (US)
For what was basically the first original episode of the show, with absolutely nothing to draw on from the Danish-Swedish version, a surprisingly good bit of work that ties up all the loose ends involving secondary characters who largely got overlooked by that show. Fascinated to see how they end it, since the original’s conclusion was the most disappointing aspect of it and this could pip the US version ahead. Also of note is that Sonya Cross has essentially become a more plausible aspie, going from teenage aspie to adult aspie in her behaviour in the space of 12 episodes, which is equally fascinating to behold.

Sleepy Hollow (Fox/Universal Channel)
After a very promising first episode, Sleepy Hollow rapidly degenerated into a dull, mythology-bound, sillier X-Files with a hint of Buffy thrown in. A couple of digs at the British, of course, but a few jokes about modern-day technology didn’t lift the show much up beyond the average Grimm episode.

Strike Back (Cinemax/Sky 1)
Strike Back team go into Russian prison. Cue implausible fights, bad acting and more. Nevertheless, surprising in some aspects, including tolerance towards a transvestite prisoner.

Recommended shows
Elementary (CBS/Sky Living)
The return of the other modern-day Sherlock Holmes series, this one set in New York. Except this episode went all the way to London. I was braced for some eye-rolling but actually, it was a very good TV England, with few Americanisms in the piece beyond the occasional weird bit of dialogue that hasn’t been said in England for 50 years (“Up to snuff”). Everything looked nice, and we had Rhys Ifans as a very different Mycroft Holmes from the ones we’ve seen before, and Sean Pertwee nicely hammy as a similarly different Inspector Lestrade. There were some great references, some subtle (Langdale Pike, The Norwood Builder), some not so subtle (221b), to the original stories. It was also one of the few Elementary episodes that actually felt like a modern day Holmes story, with a problem that seemed unsolvable and which was eventually solved with staggering insight but Holmes. A great start to the season and I’m looking forward to the rest of it now.

The Almighty Johnsons
Wow. Superb ending to the season and perhaps even the series. If that’s it, it’ll be a great way to go out, even if not quite every story arc was resolved. Probably the best season of the show overall. Watch it if you haven’t been watching it already.

“What did you watch last week?” is your chance to recommend to friends and fellow blog readers the TV and films that they might be missing or should avoid – and for me to do mini-reviews of everything I’ve watched. Since we live in the fabulous world of Internet catch-up services like the iPlayer and Hulu, why not tell your fellow readers what you’ve seen so they can see the good stuff they might have missed?

It’s time for our regular look at the TV that the BFI is showing, this time in the months of October and November 2013. And what a pick there is. There’s a big collection of TV previews, including episodes of the news series of Wizards Vs Aliens and This Is Jinsy, the first episode of Yonderland from the Horrible Histories cast, the first episode of the final series of Poirot mysteries on ITV, including a Q&A with David Suchet, and Mark Gatiss’s adaptation of The Tractate Middoth, complete with documentary on MR James and Q&A.

On top of all that, there’s a season of Gothic movies and TV, including Channel 4’s Dead Set, BBC1’s classic Louis Jordan adaptation of Count Dracula introduced by the director, and a panel discussion about vampires that involves none other than Russell Tovey, Anthony Head and Toby Whithouse.

END_OF_DOCUMENT_TOKEN_TO_BE_REPLACED

There will come a point when you’re watching The Crazy Ones, some time quite early on in the episode, where you’ll begin to wish for the sweet release of death. Anything to avoid having to watch the rest of the horror. And given the episode is only half an hour long and you could naturally just turn off the TV, to make the viewer wish for death that quickly is an impressive feat.

The Crazy Ones is a great example of how not to do an advertising show. Mad Men has already shown us how to do one well; Trust Me was fine if not brilliant; this monstrosity gives us Robin Williams and Sarah Michelle-Gellar as father and daughter advertising executives ‘humorously’ trying to come up with ideas for inspiring adverts.

Except the writer isn’t one of the many talented individuals behind Mad Men, it’s David E Kelley, whose talent appears to have shrivelled up of late, giving us saccharine-coated, misogyny-laden war crime after war crime in the form of The Wedding Bells, Harry’s Law, Wonder Woman, Monday Mornings and now this.

The result is we have to endure Williams riffing on old McDonald’s adverts using material that was out-of-date 20 years ago while Gellar just fusses around like she has no personality beyond ‘daughter of Robin Williams’. She does get to punch something and hurt herself, just to show symbolically that she may have been Buffy Summers once, but you don’t have to worry about her being a strong woman in anything Kelley puts together.

Oh yes, there’s Kelly Clarkson singing about meat and sex. No, really, they got Kelly Clarkson in to twerk about beef patties. She agreed to that, too.

The show’s got 15.5m viewers, which shows that you can pretty much put hate crimes, pictures of goldfish or soothing images of pine trees on CBS and people will still watch it in droves. But for the sake of your sanity and your family, do not watch this. Even this trailer is a threat to your life and it’s all the best bits from the pilot. 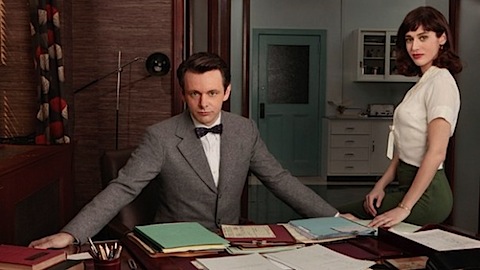 Although most people rate the works of Einstein and Schrödinger as among the most important works of science of the 20th century, the Masters and Johnson report has perhaps as much claim to the title as those do. A pioneering exploration of human sexuality, it overturned millennia of incorrect thinking, revolutionised attitudes towards homosexuality and provided a radical new look at female sexuality.

The team behind it were almost as interesting as the report itself. William Masters was a noted expert on human fertility while Virginia Johnson was a twice-married former nightclub singer who wanted a job as a secretary and caught Masters’ eye when he was looking for a female partner who could help him with his work – which, initially at least, somewhat unusually involved prostitutes and couples being randomly and anonymously assigned to have sex with one another.

The study is the basis for the biographical Masters of Sex, which sees the always fabulous Michael Sheen and Lizzy Caplan (gosh, The Class seems so long ago) play Masters and Johnson respectively. The series is a somewhat straight look at the arrogant, repressed and controlling Masters and the more-free spirited, personable Johnson, who is ultimately the one with the people skills to recruit volunteers. It’s also a Mad Men-esque look at the mores of the time, not just sexual but attitudes towards women – a time when the married Masters could suggest to Johnson that they have sex to avoid ‘transference’ to the study and pretty much firing her for saying no.

As you might expect, there’s more than a few sex scenes, with the usual greater female nudity than male nudity, even when not strictly necessary to the plot. Strangely, though, it’s quite a coy show, not quite as ready to deal with discussions and depictions of sexuality as you might have expected. The story is engrossing, largely because of the personalities of Masters and Johnstone. The cast are all great, particularly Sheen and Caplan.

But it’s not going to be for everyone, since the plot is a little drawn out, and after a couple of episodes, my interest has started to wane, despite being primed to enjoy this. I’ll stick with it, though.