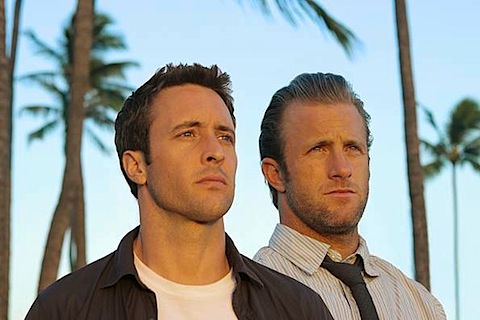 In the US: Mondays, 10/9c, CBS
In the UK: Bravo in October (assuming it’s still around by then)

I don’t know about you, but I have hazy memories of the original Hawaii Five-O. Steve McGarrett with a quiff, a bloke called Danno, it was all set on Hawaii, it had a cool theme tune and a cool title sequence, and it was about the police. I suspect I’m not uncommon in this regard, so before anyone starts complaining about sacrilege, just ask yourself exactly how well you remember the original.

There are other reasons to complain, so why let yourself be an open target like that?

This time, as well as a very slight renaming – Five-O is now Five-0 – we have an entirely new plot that still homages the original. Navy intelligence officer (and terrorist hunter) Steve McGarrett – Alex O’Loughlin, whom you might remember from Moonlight and probably won’t remember from Three Rivers – decides to return home to Hawaii when terrorists strike close to home. When offered the chance by Hawaii’s governor to run a special police unit that’s above law, he hesitates a bit, before assembling a motley team of crime fighters, including an old quarterback friend of his (Daniel Dae Kim from Lost), his cousin (Grace Park from BSG and The Border) and a New Jersey cop (Scott Caan from Ocean’s 11) who’s transferred over so he can be closer to his daughter.

His name’s Danno. Hmm. That rings a bell.

“Pilot” – Upon returning to Hawaii to investigate his father’s murder, decorated Naval officer Steve McGarrett is recruited by the Governor to head up an elite new police task force – his rules, her backing, no red tape. Their first case involves tracking a weapons dealer connected to McGarrett’s father’s murder, on the series premiere of HAWAII FIVE-0, Monday, Sept. 20 (10:00-11:00 PM, ET/PT) on the CBS Television Network.

HAWAII FIVE-0 is a contemporary take on the classic series about a new elite federalized task force whose mission is to wipe out the crime that washes up on the Islands’ sun-drenched beaches. Detective Steve McGarrett, a decorated Naval officer-turned-cop, returns to Oahu to investigate his father’s murder and stays after Hawaii’s Governor persuades him to head up the new team with full blanket authority to hunt down the biggest “game” in town. Joining McGarrett is Detective Danny “Danno” Williams, a newly relocated ex-New Jersey cop – a working man in paradise who prefers skyscrapers to the coastline – but who’s committed to keeping the Islands safe for his 8-year-old daughter; and Chin Ho Kelly, an ex-Honolulu Police Detective, and former protégé of McGarrett’s father, wrongly accused of corruption and relegated to a federal security patrol. Chin’s cousin, Kono, is a beautiful and fearless native, fresh out of the academy and eager to establish herself among the department’s elite. McGarrett, repairing his relationship with his estranged sister Mary Ann, vows to bring closure to their father’s case. The state’s brash new FIVE-0 unit, who may spar and jest among themselves, is determined to eliminate seedy elements from the 50th state. Peter Lenkov, Alex Kurtzman and Roberto Orci are executive producers for CBS Television Studios.

Is it any good?
You know what? It’s not awful. It’s actually fun. The action is all very well executed courtesy of director Len Wiseman (Underworld), with some real movie-grade stuntwork going on. The dialogue’s quite nifty, bearing all the usual hallmarks of Alex Kurtzman and Roberto Orci’s writing skills. Hawaii proves as nice a backdrop as you would expect. There are attempts to use the locals, and much is made of the fact this is Hawaii and it has unique law enforcements issues – it’s not just Los Angeles near the beach. The main cast are all fine, particularly O’Loughlin as the steely counter terrorist and Caan as the humorous New Jersey cop who grates against O’Loughlin. Even the guest cast is good, with Will Yun Lee (Witchblade) and James Marsters (Buffy, Smallville) – who’ll probably be recurring – doing a fine job with what they have.

Basically, it’s “fun stupid” – as it’s known in the trade. We’re not talking CSI: Miami level stupid, but nothing could be that insane. Instead, this is likely to be guilty pleasure TV, in which you get to enjoy the characters – who are enjoyable enough – and their interactions, while you escape to a pretty island and watch the evil bad guys get their just desserts at the hands of the good guys, whose dodgy methods are fine because they’re the good guys and they’re obviously up against evil.

It might have been nice to have had a little of the grit (and even reality) of the original series, but this is a completely different beast. I’ll probably keep watching, but I’m not feeling absolute love for the show since my brain hasn’t been engaged by it. I doubt Len Wiseman will be directing or Kurtzman and Orci writing the next episode, either, so let’s wait for a couple of weeks before writing this in with pen in our planners, huh? All the same, fun enough to give a try, I’d say.