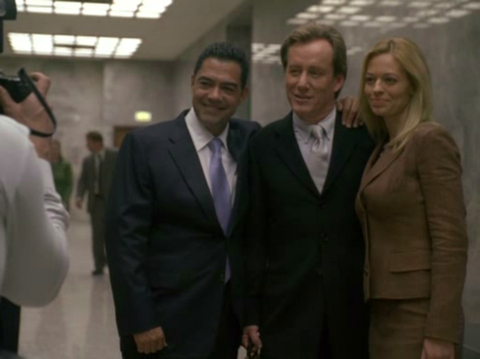 In the UK: Acquired by Five, with UKTV picking up basic pay rights

There’s nothing quite like a successful show on another network to make US television execs wonder how exactly they can have some of that ratings goodness, too.

Look at House. It was a surprise success for Fox that took everyone by surprise. CBS seems to have taken one look at it and said to themselves, “Hey, we should do a show like that, except not about doctors or else we’ll get our asses sued.”

As ever, though, the carbon copy is always a pale imitation of the original.

Case for the defence

The ever fabulous James Woods plays Sebastian “Shark” Stark, a scarily clever and skilled attorney who, much like Matlock, has never lost a case. Unlike Ben Matlock, however, Stark is a defence attorney with a client roster of the pure evil. No matter how nasty and obviously guilty they are, Stark always finds a way to prove them innocent.

As a result, he’s a rich man. He’s got a stonkingly big house, a courtroom in his basement tiled with slate from the Supreme Court and big alimony cheques to pay to his expensive ex-wife. Life is good for the Shark.

That is, until the day Stark has an unpleasant epiphany. A wife-beating, wife-murdering client walks away scot-free, thanks to Stark’s “reasonable doubt” defence. Six days later, the client kills his girlfriend, a friend of Stark’s.

For once, Stark blames himself and realises that perhaps legal work should be more than just fun and mind games. He mopes around for a month, with occasional visits from his 16-year-old daughter to cheer him up.

That particular depression ends when the mayor of LA hauls him in. He’s noticed that as Stark has always told him, the LA DA’s office sucks at prosecuting. He’d like Stark to head up a new team that will get the criminals behind bars where they belong.

Case for the prosecution

Unfortunately, all those acquittals that Stark arranged have left a nasty taste in the DA (Jeri Ryan)’s mouth. A confirmed Stark-hater, she consigns him to the worst office, with the worst cases and the worst lawyers on her team.

It’s up to Stark to use the few resources he has in conjunction with all those skills of darkness that he honed while batting for the other team to ensure that even the unwinnable can be won.

The first case: a pop starlet who’s accused of murdering a man she claims tried to rape her. It’s entirely obvious what actually happened (bar the details, which make no sense when they finally do arrive), so Woods has to spend half an hour trying to avoid the impending conclusion, mainly by insulting his new legal team. And because it’s tele law, the guilty party confesses while on the witness stand, rather than clamming up and refusing to say another word once the game’s up.

In other words, no real surprises to be found anywhere in Shark.

So, in a nutshell, it’s House but with lawyers: grumpy, mean, genius who always gets the right answer eventually, both helped and hindered by his group of irregulars, while they have a debate in their special debate room.

Woods is as good an actor as Hugh Laurie and even better suited to his role, but the show rests on his shoulders and those of his character alone, unfortunately. That’s down to both the writing and the rest of the cast.

For one thing, he’s not getting any help from Jeri Ryan. In this pilot episode, she coasts through with the same icy blonde persona that got her through Star Trek: Voyager and The OC for the best part of a decade. That’s mainly because she has a mono-dimensional role that makes Dick Dastardly look like he was written by Arthur Miller. Short of shaking her fist and screaming, “I’ll get you next time, Shark!”, there’s not much else she can do with the character until the writers decide to give her something useful to do.

Since most of the rubbish lawyers Stark has to look after are pretty young things that have the presence of oxygen molecules, Woods is not getting any help from that quarter either. Only Sarah Carter (Numb3rs, Smallville, Black Sash) has any recognition factor at all, which shows you just how out-classed they are in the presence of an actor like Woods. And the script gets them to behave in only the most predictable, stupid ways, purely to make Stark look even better.

As for Stark’s personal life, his 16-year-old daughter and ex-wife might as well have been hewn from Kraft Dairylea slices, for all their contributions to the drama. The court-room is where the fun is going to be in Shark, if it’s going to be anywhere.

Still, it is entertaining, thanks to Woods, albeit a bit throw-away and untaxing. It doesn’t have the writing quality of House, but like that show, it could well develop into something good over time. CBS has just hired a roster of high-profile legal brains – the ‘Shark’s of the real world, in fact – to give the show some kind of grounding in reality. That strategy never worked for The West Wing, but it could well work for this show. After all, wouldn’t you like to know the tricks really nasty lawyers use to win their cases? I would.

One to keep an eye on, I reckon, but not an automatic addition to your viewing diaries, I’m afraid.