Yes, it’s Weekly Wonder Woman – keeping you up to date on pretty much anything involving DC Comics’ premier superheroine, including her baseball playing

Most of the talk at the weekend at this year’s SDCC was about the forthcoming Justice League movie, the Wonderful poster and trailer for which we looked at on Monday. However, there was some news about comics, too – mind-blowing, hey?

Top of the announcements was the revelation that there will indeed by a Volume 2 – and a Volume 3 – of Wonder Woman: Earth One, once again written by Grant Morrison and drawn by Yanick Paquette.

The story will see Nazis, led by Paula Von Gunter, invading Paradise island. It’s Amazons vs Nazis, and somebody is going to get punched!

But at a panel with little known DC publishers Dan DiDio and Jim Lee, while reflecting on the nu52, DiDio confirmed that at least one part of it was still in effect: Zeus is still Diana’s dad.

In other news, also as suspected, Wonder Woman 2 is a go and it now has a release date: December 13 2019. More surprisingly, Patty Jenkins still isn’t confirmed to direct it. What’s going on there, hey?

What is confirmed about Jenkins is that she’ll be working with Chris Pine again, this time on a completely unrelated TV project for TNT about Fauna Hodel. For those wanting to know a little more about this year’s other Wonder Woman movie, Professor Marston & The Wonder Women, there’s a Q&A with that film’s director for you to peruse, too.

But it’s nearly August, which means it’s time for Weekly Wonder Woman to become Not Until September Wonder Woman. Unfortunately, I’ve only one title to leave you with until then: Wonder Woman #27. Let’s chat about it after the jump.

Diana saves everyone at the wedding by shielding them from the bomb with her body.

However, when the room starts collapsing around them, Etta is injured and Diana has to take her back to HQ to be treated.

Except the bad doctor uses a super-strength sedative to knock out Diana and take a sample of her DNA.

She then uses it to give herself Amazonian strength and speed.

After a bit of a tussle, Diana uses her Lasso to reveal the true, non-Amazon doctor.

But with one enemy defeated, another one awaits… 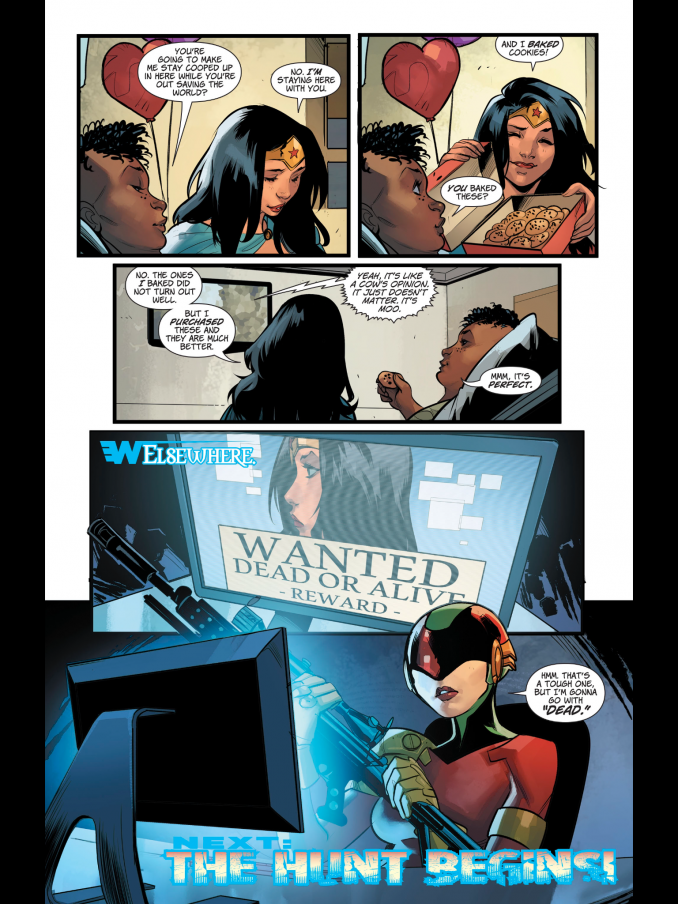 I’ve not a huge amount to add that I didn’t say when reviewing issue #26, other than that this was a surprisingly brief opening story at just two issues. An attempt to get the attention-challenged kids in or a deliberate decision to be different to Greg Rucka? I can’t say.

Otherwise, the same, younger-pitched style as the previous issue and while not hugely well told, not badly told either. As usual, the question of how Diana can survive a bomb blast without a scratch yet still be knocked out by a dermal tranquilliser and have her skin punctured by a hypodermic is a difficult one, but this isn’t the first issue to hit that particular kind of problem. The idea that the Amazons are merely genetically different, rather than magically different, is new and potentially interesting, though; but the idea that the goddess Diana would have much difficulty fighting a doctor who’d just acquired a new body (give or take) and who’d therefore have trouble walking takes a bit of swallowing, too.

I do like Fontana’s attempts to make Diana someone who has female friends but who is an outsider to their culture so doesn’t quite understand how. But I’m not 100% convinced that Etta Candy would be a big Friends fan.

Still, isn’t clunky subtext what comics are all about, hey?

Disclaimer: Owing to the small fortune it would take to buy every single DC comic each week, this is not a guaranteed rundown of all the comics that feature Wonder Woman. If you know of any I’ve missed, email me or leave a comment and I’ll cover them the following week

A review of Wonder Woman #2