Yes, it’s Weekly Wonder Woman – keeping you up to date on pretty much anything involving DC Comics’ premier superheroine, apart from children’s wear

The observant will notice that it’s a Thursday instead of one of the other days that WWW normally arrives in your browser. That’s because:

Genius, hey? Let’s see how long I can keep it up for.

Anyway, with the movie now in its third week of release, news and promos are dying down. Nevertheless, it has now passed the $600m worldwide box office mark and become the highest-grossing live action movie ever directed by a woman. Which warms the cockles of my heart, of course, even if it has a little way to go to catch up with Beauty and the Beast to take this year’s box office crown.

So, with nothing new to report from the comics world or anywhere else and with our new Thursday “Let’s steal it from Thor day” schedule in place, let’s go and look at both last week’s and this week’s new releases. We have Greg Rucka signing off properly with Wonder Woman #25, a definite uptick in quality with Wonder Woman ’77 Meets The Bionic Woman #5, and a definite downtick in Justice League #23 and Trinity #10.

Last but not least, we also have a somewhat unexpected crossover in the form of Wonder Woman/Tasmanian Devil #1. No, really. You should see the Batman/Elmer Fudd crossover…

Without her Lasso and convinced her patrons have been deceiving her all her life, Diana is angry and goes around abusing enemies at Mach 3, much to the concern of Batman and Superman. 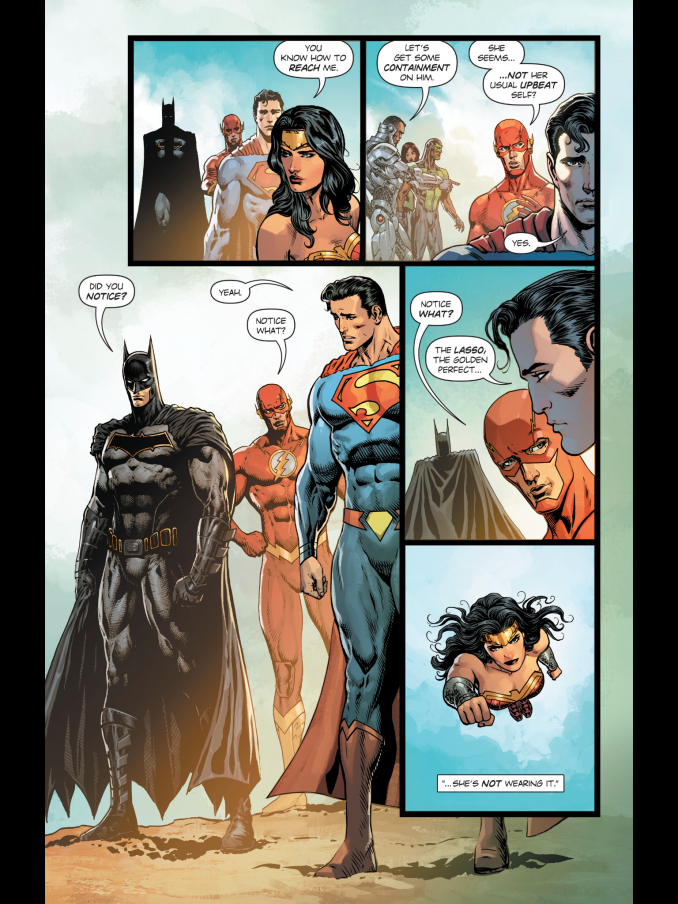 Meanwhile, Veronica Cale is being investigated by Etta Candy et al but there’s little evidence to pin anything on her. Cale also refuses to help Diana cure Barbara Minerva of her Cheetah-ness.

Prompted by Superman, she asks the gods and goddesses to help her. Which they do!

Reunited with her Lasso, she returns to the newly shaved Steve Trevor, who’s also set up a new American house for Diana. Something that pleases her rather a lot.

So obviously I boo-booed last time when I assumed that with the alternating timelines, Wonder Woman #24 was his goodbye issue for the current timeline. Sorry about that. Me stupid.

Because this is obviously a significantly better place for Rucka to round things off. While Cheetah is MIA, Etta has her doubts about Diana, Diana still can’t go back to Thermyscira and Etta’s boss is a bit squirly after having been under Doctor Cyber’s control for so long, everything is in a good place now.

What is that place? Essentially, it’s a purged world. While how much of the continuity of the nu52 actually happened is up for debate, it’s clear that pretty much everything Brian Azzarello introduced has been rejected, except perhaps having Zeus as Diana’s father – the jury’s still out on that. But it’s also a purge of everything that happened after Rucka left the title, including his own final issues, as well as some things he clearly thought were wrong with the Perez reboot.

So we’re in a world where Steve Trevor is young, virile and Diana’s boyfriend again. The gods and goddesses are now largely benevolent humanoids in a Classical Greek sense and they’re looking out for Diana and love her (the reveal of Athena in reflection in the water was actually even quite beautiful). The Amazons don’t rape and murder sailors for their man sperm. Etta and Ferdinand are around again and important. Veronica Cale is once again Diana’s main enemy, with Poison, Doctor Cyber and various others hanging around at the margins.

Rucka has effectively restored Wonder Woman to his own Platonic ideal of the Wonder Woman universe – one he authorially describes as ‘perfect’ in his final page.

After Diana is wounded in the previous issue, Jaime has to take her to Transformation Island where the Amazons can heal her.

Meanwhile, with the baddies invading, the Amazons have to learn how to fight an army of robots. Fortunately, Wonder Girl and Max The Bionic Dog are on hand. 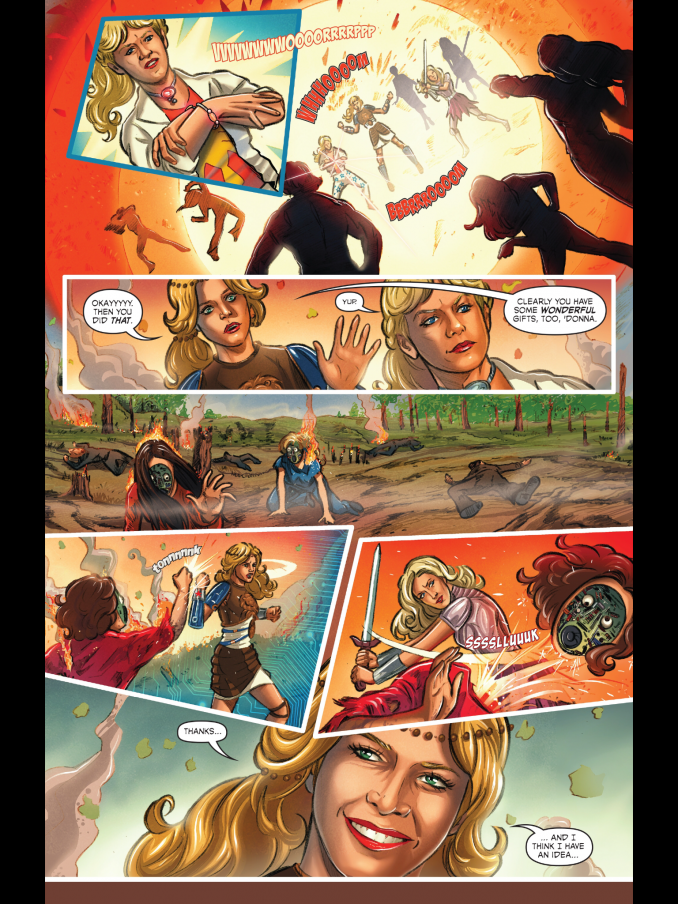 And Diana and Jaime both get new sets of armour to fight the invaders, too.

So, after bitching about how Wonder Woman ’77 Meets The Bionic Woman has basically been “tell don’t show” fan fiction for the past five issues, I’m relieved to say issue #5 is actually very good. It’s exciting, things happen, there’s plenty of fun, lots of old favourite characters show up and are well treated by the author, all with almost minimal amounts of continuity references. Even the introduction of Transformation Island to the Wonder Woman ’77 mythos is done with minimal flagging of precisely which issues of Volume 1 it appeared in.

We also get some properly new things, such as new armour and outfits, and the idea that Paradise Island hides itself using advanced technology rather than magic.

I would say that if you’ve going to start reading it, now’s the time, but I think there’s only one issue left. Although I’ve form for being wrong on that score…

The Justice League has to fight a patriotic bad guy who’ll do anything to stop terrorism. It’s up to Green Lantern Jessica to save the day.

Be sarcastic to Batman.

As you can see, she remembers at this point that she has a Lasso that compels people to tell the truth. Later on? Not so much.

She also fights a lot.

Still, although the focus here is Jessica The Green Lantern, at least Diana gets a look-in, although writer Tom DeFalco’s characterisation is pretty poor, inconsistent and essentially making her a Feminazi counterpoint to a bunch of right-wing extremists.

Not really. But we’re at the plot explanation section of the story, so let’s not expect too much as we enter the final act, hey?

Circe is attacking Themyscira and turning the Amazons to stone. Only one thing can stop her and that’s a talisman belonging to the Minotaur, who still lives in the Labyrinth that runs under the island. Except the Labyrinth is magical and also appears all over the world. Only a magical beast similar to the Minotaur can find him, so Diana goes looking for a creature she met when she was young.

One of the surprising things about the various tie-ins we’ve been getting over the past year or so, such as the Justice League/Mighty Morphin’ Power Rangers title, is that often, they’ve been a lot better than some of the regular DC titles. Oddly, although I was very much expecting the worst with this (and indeed the entire DC/Loony Toons crossover range), it’s actually very good.

True, you have to get over the fact it’s the Tasmanian Devil from the cartoons, but it actually treats both him and Wonder Woman with respect and serves up a pretty enjoyable narrative that draws on their respective strengths. It’s clear that writer Tony Bedard does actually know a bit about Wonder Woman and her continuity, so there are no glaring howlers to complain about. Indeed, it’s actually quite a fun, well drawn version of Diana we see here, one who follows Orpheus in tricking wild beasts but subduing them with music, but also one who respects others and can speak the languages of beasts.

It’s all written for a slightly younger audience than normal admittedly, but honestly, if you’re going to buy one title other than Wonder Woman this week, this is the one to get.