Well, blimey. I’m gone for what? Two weeks? And DC unleashes a deluge of new Wonder Woman comics the likes of which we’ve never seen before.

On the one hand, I’m happy. Things were looking bleak at the end of last year (although my belief that Wonder Woman ’77 had stopped turns out to be incorrect – it’s just taking a long break), but it seems that DC Comics has come up with a cunning plan: all it needs to do is publish twice as many comics every month and sales will double.

All the same, and despite the fact that end-of-year schedules can only mean one thing – annuals – there were rather a lot of Wonder Woman titles released in the past two weeks. And since I also took it upon myself to see if I’d missed any Wondy-related comics in the past month or so, I now have a combined total of 15 issues to get through this WWW. That means work. I don’t like work. I’m happy, but I have to work – what a quandry.

So forgive me if rather than doing full-on reviews, I simply highlight a few interesting facts about each issue. I might actually get to go to bed tonight, if I do.

Don’t worry, normal service will resume next Monday – assuming Dan DiDio doesn’t release another 15 titles this week – but if you have any questions about an issue, ask me in the comments section.

Aquaman #46-47
What happens: Aquaman’s trying to stop Atlantis being invaded by a bunch of old-school Atlanteans from the planet Thule (or something). Wonder Woman and the rest of the Justice League then help Aquaman to fight them.
What’s interesting: Wonder Woman appears to have a special connection with Aquaman, thanks to their shared history of ‘ancient cultures’. She can track him through Poseidon’s Trident. The Thule bunch have also shown up on Themyscira. Diana doesn’t like John Constantine very much.

Dark Knight III #2
What happens: Superman and Wonder Woman’s daughter Lara is a bit snotty during a training session with her mum, because she shouldn’t need to learn how to fight, being an indestructible Kryptonian. Let’s see how that works out for her.
What’s interesting: Alternative Wondy gets an entire comic at the end of the issue for this.

Injustice: Gods Among Us: Year 5 #3
What happens: Wonder Woman returns to Man’s World from Themyscira, only to discover Superman is having a fight with Doomsday. She flies to his aid, only to discover he’s being helped by Bane of all people (duh, duh, duh, duh, duh, duh – that’s Bane). Bane wants to join Superman, Diana and everyone else thinks that’s a bad idea.
What’s interesting: Superman no longer thinks he needs anyone else, not even Diana – apparently it’s not a democracy.

Justice League of America #6
What happens: Everyone fights Rao and his minions. Everyone gets killed. Even Wonder Woman.
What’s interesting: All the gods have buggered off, leaving Diana in charge of Olympus. Not that she really gets to enjoy the experience.

Justice League #47
What happens: All the New New Gods (aka the former Justice League) are starting to come to their senses. But it looks like they’re going to have to ally with the former Crime Syndicate in order to defeat the armies of evil.
What’s interesting: Wondy yet again manages to defeat Superman in a fair fight, even though Superman has been juicing on Apokolips fire-pit energy. She really is top. We also learn that the Lasso of Truth wasn’t designed for interrogation but to ‘help people see themselves for who they are… it’s to help.’ Grail needs Steve Trevor – aka the first man ever to set foot on Themyscira – for some reason. And despite the fact we had all that equivocation from Diana last issue about her relationship with Superman, this issue, she admits loving him.

Sinestro #18
What happens: Wonder Woman helps the Sinestro Corps to fight a bunch of space vicars.
What’s interesting: Sinestro calls her the goddess of war, and she, Clark and various others get ‘yellow ringed’ at the end.

Superman Annual #3
What happens: Superman gets left out of the action a lot and he pulls a sad face.
What’s interesting: Even though Wondy asks him to do what he asked of her back in Superman-Wonder Woman #6 or whatever (ie look after the Earth while she’s in outer space fighting the good fight), Supes still pulls a sad face, because he’s big and manly and should be the one who earns the most or something.

Superman-Wonder Woman #24
What happens: Wondy and Superman just about manage to survive the drainy, fighty robot thing that had captured Diana.
What’s interesting: Vandal Savage Jr is impressed by Diana’s godly energy; Diana saves everyone from the explosion; Supes remembers that he and Diana make a great team and maybe has second thoughts about temporarily dumping her; Diana stops Supes from moping by doing an Edna Mode on him.

Superman-Wonder Woman Annual #2
What happens: Superman looks at his photo album, and thinks back over the beginning, middle and end (?) of his relationship with Wonder Woman.
What’s interesting: We get a series of different stories by different authors and artists, looking back at different points of the Power Couple’s relationship. We get to see everything from first kiss through sexy moments (although not as sexy as originally planned – TTFN shower scene). We even get to see that Clark was ready to propose to Diana – until she incoveniently got promoted to goddess of war, which made him feel all ambivalent. And, as suspected, it’s being depowered that’s caused him to feel a little unmanned. Plus we get Mera and Diana having girl chats underwater, it turns out Athena the virgin goddess had a fighty daughter and we get to learn what Diana wears under her armour. 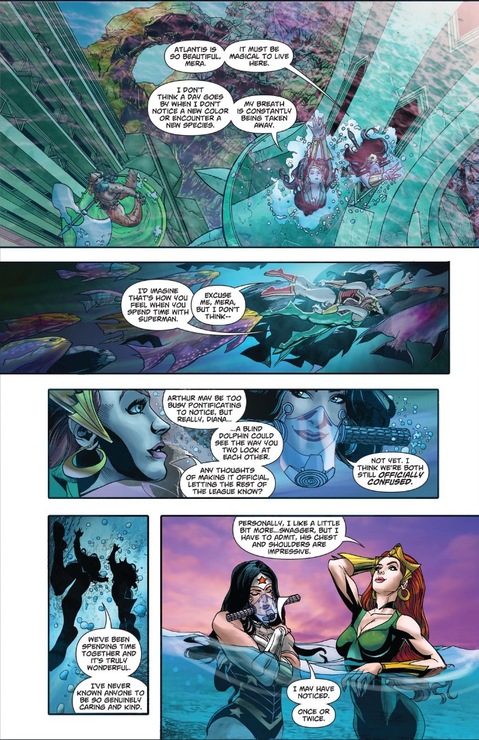 The Legend of Wonder Woman #8
What happens: Diana sticks up for Steve Trevor. Incensed by the interference of the other gods, Zeus possesses Hippolyta and commands there be a Contest. Diana wins, despite some sneakiness by the Ares sect.
What’s interesting: The Contest, of course. There’s always a Contest. Except this is pretty Golden Age, since Wondy isn’t super-powered, just AN Other Amazon, albeit trained by a priestess of Ares. And, of course, Zeus manifests himself.

Titans Hunt #1-3
What happens: All the various DCYou versions of the pre-Flashpoint Teen Titans start to vaguely remember who they used to be and find themselves heading to a certain former clubhouse.
What’s interesting: That includes the current clay-based Amazon and new goddess of Fate, Donna Troy.

Wonder Woman #47
What happens: Cheetah comes to Paradise Island, hunting for the crystal that gives the Amazons eternal youth.
What’s interesting: It’s the first single-issue story since the nu52 began. We learn that the Amazons have been having fights because Diana has emotionally projected her ambivalence about being goddess of war onto her sisters – now Ares is back, she’s happy so the Amazons are, too, and they’re regretting their brother-murdering recent actions. However, Diana’s still goddess of war. Importantly – as the ghost of Wondy’s mummy points out – that means she can’t enter another god or goddess’s temple. Equally importantly, Cheetah can’t serve two gods so has to choose between Hera’s crystal and her African god-given powers, opting for door number two. We also learn that being goddess of war has made Diana stronger and faster, meaning she can now paste Cheetah all over the trees with alacrity. Wondy also wears hers nu52 cosi all the way through the issue, despite having her DCYou outfit on the cover – a guest artist’s ignorance, editorial admission the new costume is a bit pants or has Diana simply slipped into an old outfit while she waits for the spin cycle to finish?

Monday’s news in a new home

Yes, it’s Weekly Wonder Woman – keeping you up to date on pretty much anything involving DC Comics’ premier superheroine, including how much Patty Jenkins is getting paid to direct Wonder Woman 2 Another week’s […]