It was a bit of a quiet week last week for Diana, so only two issues for us to look at, one of which involves a song and dance number, one of which she’s barely in at all, yet which is nevertheless surprisingly important for both her and the Amazons (cough, cough, retcon, cough, cough): Justice League – Darkseid War Special #1 and The Legend of Wonder Woman #22. Guess which one is which, before we talk about them after the jump.

Meanwhile, back in the real world, DC has been giving us further details about its ‘Rebirth’ plans, including a little more about what Greg Rucka is going to do be doing in Wonder Woman.

“Having realised a lot of what is taken as truth about herself is contradictory and the contradictions have become so acute, she no longer knows who she is,” Rucka explains. “The first arc is called ‘True Lies’, and she’s attempting to find the truth.”

Depending on the answers she finds. Diana may be rocked to her very foundation. Rucka teased a number of questions that Wonder Woman will be struggling with along the way:

“Is she the goddess of war? Was she made from clay? Is she a demi-goddess? Is Themyscira really what its been presented to be? Look back at how many times Diana’s mother Hippolyta has died; where’s the truth in that? What’s accurate, what isn’t?

“We looked at the golden Lasso of Truth but it’s not the lasso that does it, it’s Diana who brings the truth.”

While his Year One storyline will provide foundations…

“There’s a moment in Diana’s origin story that we forget, and ‘Year One’ is about reminding people of the importance of that,” Rucka notes. “The core moment, maybe one of the most important moments for her, is when she leaves home; the time she answered the call. We overlook that a lot.”

Naturally with any Year One tale, expect to see some classic tropes re-examined, as well as old friends – not to mention deadly enemies – reintroduced and re-examined: “Steve Trevor’s got to be there, Etta Candy has to be there,” Rucka says. “You think you know Barbara Minerva, the Cheetah? You think you know what’s been going on with Ares? You were wrong – you’re just flat-out wrong.”

Talking of origin stories, also back in the real world, on a somewhat warmer set than either Trafalgar Square or King’s Cross Station, Diana (aka Gal Gadot) is busy finding a certain Steve Trevor (Chris Pine) washed up on the shores of Themyscira, all under the watchful eye of… Pink. It looks like Pink anyway. It might be Robin Wright.

Justice League: Darkseid War Special #1
Plot
Grail’s mum flashes back to tell the story of her and her daughter’s exile from Themiscyra. Meanwhile, Grail’s praying to the old gods and is doing something odd to Steve Trevor.

Is it any good?
It’s better than the usual Johns ‘Tales of Very Important Things’, with a certain amount of characterisation going on and dialogue that you can’t stab someone with, but it’s still basically an info dump to explain what’s been going on in Justice League for what feels like the past 27 years.

However, as is also tradition for Johns, lots of important things get revealed about the Amazons, some of it inspired by the forthcoming movie, some of it dredged from past continuity, some of it all new. But since Johns is head creative honcho for DC, I guess this must be all be unretconnable stuff. This is the Truth, everyone.

So first revelation is that the gods created the Amazons to “protect mankind from war. But after a horrific battle left them enslaved, the Amazons abandoned man’s world and retreated to a hidden island.” Clear references to both Volume 1 and Volume 2, but with a slight twist – the Amazons have simply given up on man in this version of the story, and rather than inspire mortals to do better, the Amazons are supposed to flat out protect them.

I’m not quite sure where Ares fits into this ‘make love not war’ scheme, but that’s jolly nice of the gods for a change and also means that they gave up on mortals, having once tried to help out, rather than just given up because they can’t even.

You’ll notice there that Grail is praying to the ‘old gods’ (ie not the new gods), including Aphrodite, Hades and Artemis. It’s slightly more authentic to Greek religion than Wonder Woman #49 was, with Grail praying out loud, naming the gods to whom she’s praying and having her hands raised upwards, although why she’s praying to Hades that way, sitting down and naked, I couldn’t say. All the same, maybe that’s why her prayers get answered later on in the story.

The second revelation comes shortly after Diana is born (her one appearance in the issue, other than on the cover):

(You’ll notice here that again, no clay was involved at this point, so if there’s some Rucka retcon on the way, it had better be pretty powerful stuff.)

So then baby Grail and her mum leave the island, oddly praying to Zeus rather than Poseidon or Aphrodite for smooth sailing. And when she gets to land, whom does she find? 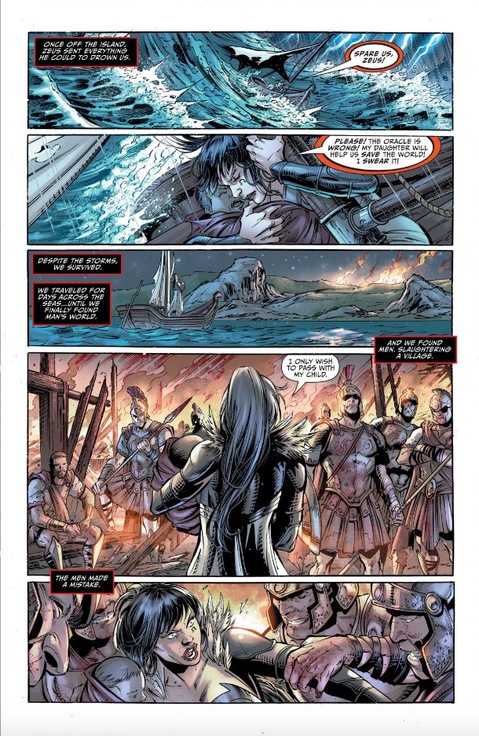 Now, pre-Flashpoint, Themiscyra was capable of time travel, so it’s possible that when Grail and mum left the island they ended up going back in time. However, that’s not been established in nu53/DCYou continuity and would be a bit odd, so I think we’re supposed to assume that the two of them left the island in Roman times, with the rest of the issue following them through history as the two immortal Amazons try to fit into Man’s World.

But that means that rather than being in the 18-30 age bracket as we’ve been led to believe, Diana is actually getting on for 2,000 years old, give or take a few centuries. While that’s in keeping with the movie and even the Wonder Woman of Earth 2, it’s not really in keeping with the ice-cream lover of Earth 1 we’ve been following. Is that some sort of Convergence fall out, or the first signs of Greg Rucka’s ‘True Lies’ storyline? Or just cough, cough, retcon, cough, cough?

Well, there might actually be an in-text explanation for the discrepany: worth noting is that seemingly all Amazons are pretty strong, whether they’re descended from gods or not, and that Grail looks like a teenager during World War 2:

So maybe Diana is both 2,000 years old but only really started looking (and feeling) like someone in the 18-30 range very recently. It’s a little strange – Herakles and other demi-gods didn’t need millennia to grow up and shouldn’t Themyscira be populated by huge numbers of millennia-old kids? – but maybe this is some peculiarity of the children of Amazons and gods (ie Grail and Diana)?

Anyway, what’s Grail up to? Whatever it is, it involves punishing the Amazons somehow and Steve Trevor. 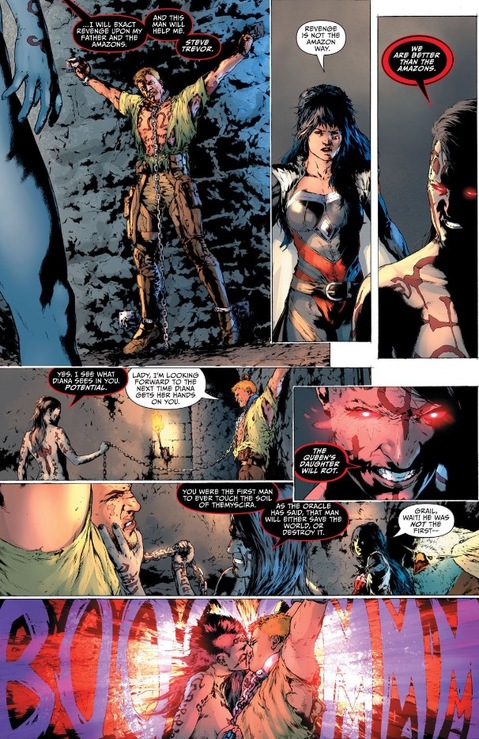 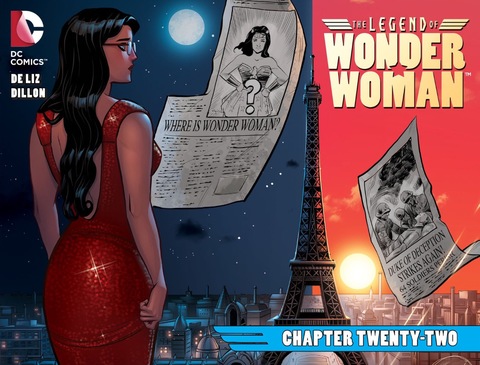 The Legend of Wonder Woman #22
Plot
No longer the champion of the gods because it’s a test/an illusion/a dream (Ed: will delete as appropriate when all is revealed), Diana continues to not be Wonder Woman this issue. Instead, we get to see Steve and Diana watching Etta Candy doing a song and dance number in Paris. 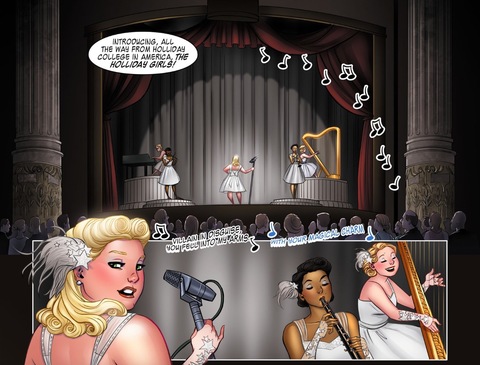 Etta needs some help, which ends up with Diana singing while dressed as an angel.

Is it any good?
It’s starting to feel like Renae De Liz doesn’t really like writing for Wonder Woman. Which is odd. She clearly enjoys writing for Etta Candy, but Candy gets to have all the fun and drive the narrative yet again, while Diana, despite the occasional moment of relaxation and not being Wonder Woman any more, doesn’t do much more than smile at best. It’s a shame, because at the moment what we really need is an origin story for Diana’s personality.

Still, maybe that’ll come with later issues as this is all clearly leading to Diana becoming Wonder Woman again, either voluntarily or by having the scales lifted from her eyes, at which point, having embraced her destiny and her calling, she might get to enjoy something for once and make a few active choices for a change.

Otherwise, quite a fun issue with some unexpected slapstick, some hints at quite a chaste romance brewing with Steve, and the usual Etta hijinks. We ventured into yet another foreign language, too: French. Shuddering at the thought of yet another language lesson from me? Don’t worry. It was good French. Move along – nothing to see here.

Also worth noting is that De Liz is taking the opportunity to tie the storyline into the pasts of other comic book characters. As well as Jonathan Kent, we’ve had a recurring character – African-American colonel Lawrence Stone – whom I suspect is supposed to be the father of Silas Stone (that’s Cyborg’s dad to you). And this issue, we had a guest visit from a young whippersnapper by the name of ‘Alfred Pennyworth’. He just wants a life on the stage, but somehow, I don’t think that’s going to be how it works out. Does that mean that Texan heiress Etta Candy knows Gotham’s richly endowed Wayne family? I think it does.

Monday’s “what headline am I going to come up with today?” news

The latest Wonder Woman comics and movie news, as well as a look at the comics featuring Wonder Woman released in the week ending June 20 2017
[…]