Although Wonder Woman is once again occupying parts of the UK during filming – this time, King’s Cross station in London – it’s a slightly less hectic pace in comics for the Amazon queen, with only four appearances this week.

After the jump, the fight against Baroness von Gunther, her rainbow death seahorse and her octopus of doom continues in DC Comics: Bombshells, while rotoscoped Lynda Carter Wonder Woman has to deal with a cult full of aliens over in Wonder Woman ’77. Meanwhile, Diana and Superman continue their interminable fight against Vandal Savage and family in Action Comics #50, while in The Legend of Wonder Woman, the day has finally arrived when not only does Diana become Wonder Woman, but Etta Candy gets to say ‘Woo woo!’

Action Comics #50
Plot
Superman may have slightly odd powers from his kryptonite chemotherapy, but fortunately he still has his friends, including the tank-hurling Diana.

Together, they free the trapped members of the Justice League. But it’s worn out Clark. 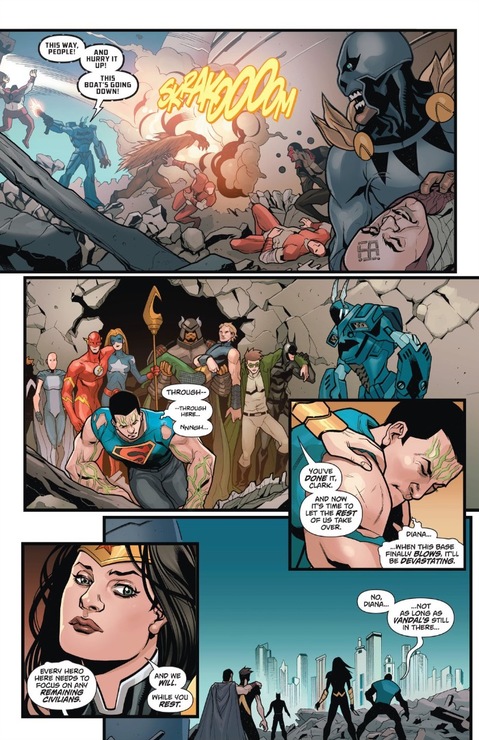 That doesn’t stop Clark, though, and he fights with Vandal Savage. Unfortunately, he falls, seemingly to his doom. Fortunately, though, he falls into the Fortress of Solitude. Knowing its true master, it does what’s necessary – it restores Superman.

Is it any good?
It’s not what I’d call great in terms of plotting, dialogue, character or much else. But it gets the plot from point A to point Z, ready for the next installment; it’s got some lovely artwork; and it does, of course, have the inevitable return of the super-powered Superman.

And for those who need a quick refresher for exactly how much of everything in Superman, Superman-Wonder Woman et al in the past year or so has been down to Vandal Savage, he very helpfully tells us this issue.

DC Comics: Bombshells #34
Plot
Baroness von Gunther on her rainbow death seahorse, together with the King of Atlantis, Nereus, on his octopus of doom (aka The Kraken), take on Wonder Woman and the Justice League.

Mera is able to defeat Nereus, but at great cost and goes missing.

But the Bombshells don’t have long to mourn as they face a new threat.

Is it any good?
It’s not as bonkers as last week and while there’s lot for Mera to do, Diana’s more or less confined to showing off her knowledge of German.

The Legend of Wonder Woman #18
Lots of big moments this issue, as we get to see Wondy using the Lasso of Truth for the first time:

Etta convinces Diana that she needs to be a rallying point for the troops. Already known as the Woman of Wonder, she should be ‘Wonder Woman’.

‘Diana Prince’ will need glasses to act as a disguise.

And just like that ‘Justice Society of America’, Wonder Woman will need a costume. Woo woo!

That might be trickier than the name or the disguise, though…

Fortunately, Diana has something with her that could help:

And finally, Wonder Woman is born.

Is it any good?
Well, it’s been a long time coming, but these latest two issues have finally given us Wonder Woman. It’s been a long process, but it’s all been pretty robust character-building and has really earned this moment. Well done to all.

Also, Etta’s little brother is called Mint? What an interesting set of names her family has…

Wonder Woman ’77 #18
Plot
Diana Prince goes to South America to investigate a cult which hundreds of people are joining. Turns out they’re lizard aliens who are infecting people with a virus that will control their minds. Wonder Woman beats them up.

Is it any good?
So on the one hand, this is very much the kind of thing that the TV series Wonder Woman used to deal with every week – generic, ridiculous aliens in a made-up country who are defeated with a bit of generic fighting, shortly after they’ve revealed their plot. So in that sense, this issue of Wonder Woman ’77 is perfect, meeting its mission statement 100%.

On the other hand, it’s very, very generic, with very litttle that marks this out as being a Wonder Woman story – change a couple of references and you could slot almost any superhero or superheroine into the plot and you’d never notice the difference. There’s also no Steve Trevor, no Irac or anything else that was important to the 70s-set seasons of the TV show. So in that sense, this issue of Wonder Woman ’77 fails to achieve its mission statement 100%.

But a couple of things are also worth mentioning. Firstly, there’s the welcome return of Cat Staggs on art. She drew issues #10, #11 and #12 and if anything, her phenomenal work has only improved since then, becoming almost rotoscope-quality at times, with Wonder Woman looking the splitting image of Lynda Carter whenever she appears.

The other point of note is that not only has Marc Andreyko seemingly departed from writing duties, we now have no single replacement, but guest writers each issue, with Trina Robbins on duty this time. Whether this is just a stop-gap measure or not, I can’t say, but Wonder Woman ’77 is starting to feel like it’s merged with the now-defunct Sensation Comics Featuring Wonder Woman to become a sort of testing ground of elseworld scenarios for new writers. That’s obviously different from what Andreyko was trying to achieve, but we’ll have to see if yields any real gold over time. Cos this definitely ain’t gold.

Yay! Gina Carano is going to be in Almost Human