Time for our weekly round-up of things Wonder Womany in the DC Universe. There’s not been a WW-centric title out of late, but she has popped up in a few, you’ll be gratified to hear – specifically, Superman #25, in which Lois Lane bursts in on a superdate; Superman Unchained #5, in which WW is off saving the world and Superman gets to see the advantages of dating a goddess rather than a mortal; and Smallville: Harbinger #1, which sees Diana in her new Smallville-universe job at the DEO, trying to recruit none other than John Constantine as a magic consultant – with the help of Zatanna. Round up after the jump…

Superman #25
This sees Clark/Superman having to deal with Parasite, as well as the Brainiac-ed Lois Lane, who now knows he’s Superman. Despite being a mental projection, Lois has the capability to gatecrash Clark’s date with Diana.

I’m not exactly sure where the writers are going with this one. On the one hand, Wonder Woman comes out of it all very well, despite the somewhat ugly artwork, making jokes and showing zero jealousy towards Lois, even if the dialogue is a little hokey. There’s also some sexy talk between Diana and Clark, rather than the somewhat chaste, teenage lovey-dovey talk they normally have to suffer.

On the other, Clark, as usual, comes out of it a bit dickish. He goes off with Lois, flies her around the city despite her being a mental projection, and the art suggests not only that Wonder Woman is perhaps a little insecure but that Clark might have feelings for Lois still. He also now gets to share the secret of his superness with Lois, who has super-powers, too. Oh dear.

Still, let’s see where they go with it. They might be making this a crux point, where he picks… the right woman.

Superman Unchained #5
Over in Superman Unchained, the normal “no Wonder Woman” rule has been relaxed to give us a brief appearance of her and Batman trying to save the world from some nuclear missiles. 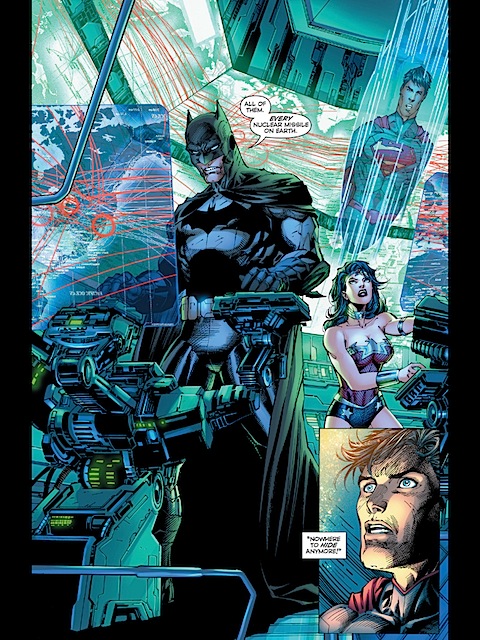 Jim Lee’s on art, so we get here the slightly porny Wonder Woman we got used to in the early Justice League books before Tony Daniel took over. It’s a brief cameo, though, so not worth buying on those grounds.

On the other hand, Superman is forced to consider how long he can hang out among humans before they spot he’s not one of them. He’s given a vision of the aging Daily Planet team.

Smallville: Harbinger #1
Over in Smallville, where Diana is Diana Prince, the DEO agent, we get a slightly different view of the new arrival in ‘man’s world’. Here, we have a Wonder Woman who’s aged quite a bit since last we saw her and who doesn’t quite get humour… and whose humour other people don’t quite get either. But you know, Skype and all:

But she’s also looking for a magic consultant to help the DEO, which has a new boss: Steve Trevor. He’s aging, too, though.

Oh well. At least Wondy gets to beat up manticores in this world. That wasn’t a joke. Now John Constantine? There’s someone who gets a joke.