It’s been a busy few week for Wonder Woman, both in movies and comics. Not a million miles from where I am now, filming for the Wonder Woman movie closed down Trafalgar Square for a few hours to celebrate Armistice Day. As well as Gal Gadot as our Wondy, the observant will notice The Office‘s Lucy Davis was in attendance, too, looking suspiciously like she might be playing a British, World War I-era Etta Candy. Or should that be Etta Sweets?

Meanwhile, on tele or the Internet or Internet-tele – however you want to describe Hulu, since it reckons its 11.22.63 has been ‘developed for television’ – a 1960s era Wonder Woman comic got pride of place in the middle of the action. If you can describe ‘that scene in the diner with the kid and the big collection of comics’ as ‘the action’.

We also got further news about DC’s forthcoming Rebirth reboot/twist/reimagining/holistic encapsulation/whatevs. Lots of titles are going to be reset back to #1 as part of Rebirth, including Wonder Woman, and various titles are also going to go bi-weekly, including Wonder Woman. Taking over from writing duties on that will be Marguerite Bennett, who’s currently writing DC Comics: Bombshells, with rumours that the title is going to be a bit more in the style of George Perez when she does so.

However, there’ll be sniffles aplenty: Superman-Wonder Woman is for the chop. That’s going to be replaced by Trinity, which will feature Batman as well. I’ll let you think about that particular ménage à trois for a bit.

And to top all of that, while Donna Troy kept on having flashbacks to when she was a Teen Titan in Titan Hunt #5 (apparently, a big part of Rebirth is everyone remembering things they used to be back in old continuities), we had appearances by Diana in Wonder Woman #49, DC Comics: Bombshells #31, Sinestro #20, and The Legend of Wonder Woman #15, as well as a brief cameo in Injustice: Gods Among Us: Year Five #9. All that after the jump.

But lastly, just a warning that as I’m away next Monday, there’ll be no Weekly Wonder Woman next week. Kind of ruins the name that, doesn’t it? Soz.

Wonder Woman #49
Plot
With baby Zeke a bit poorly, Diana has to find the one person who might know why and how to help: Gaia, the mother of all goddesses.

However, Gaia doesn’t reply; instead, it’s the Donna Troy-creating Hekate who answers Diana’s call. She reckons she can help if Diana just gets three orbs from the bottom of Hera’s scrying pool – and doesn’t tell Hera. 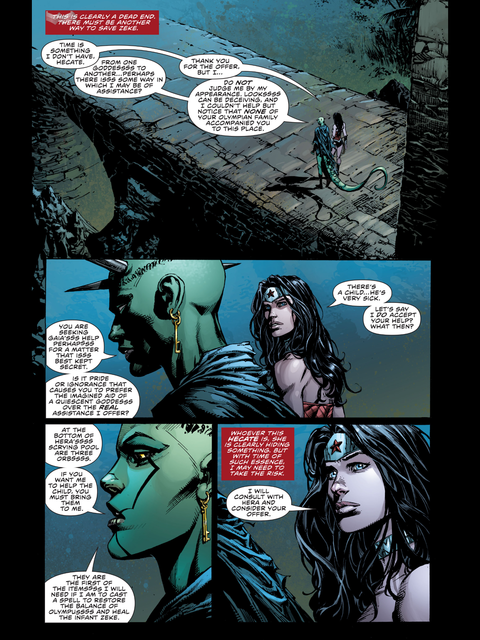 Unbelievably, Diana falls for it and goes to Olympus, where as well as eavesdropping on all the goss (the newly resurrected Apollo has the hots for someone – could it be she?)…

…she ends up collecting the goodies.

Is it any good?
There’s good and there’s bad. First, a quick reflection on Wonder Woman’s costume. I’ve noted over the past few Wonder Womans that despite Meredith and Brian Finch having created her new outfit, even with him on pencils, Wondy seemst to have reverted back to her nu52 outfit, without anyone mentioning why. Which is odd, because the in-universe reason for its creation was that she felt her nu52 outfit was something she wore when she was young, but now she’s older and a woman, it’s time to put away childish things.

Apparently, though, dressing like a girl still appeals in-universe to Wondy. Given her propensity for dancing, I’m sure a school disco in London is on the cards some time soon.

Real-world explanation? Well, compare and contrast the originally planned cover for this issue, drawn up a few months ago, and the cover as we see it now, and I think it’s pretty clear that my guess it’s all the result of some editorial diktat somewhere was probably right.

As for the issue itself, perhaps Wondy has regressed in other ways, too, because she’s really, really stupid here, and very easily defeated by a cyclops, too, given she’s goddess of war. Now, it’s always worth remembering that she’s supposed to be in her early to mid 20s and therefore almost by definition really, really stupid, but this takes the biscuit, particularly since it involves betraying her friends to help the goddess of witches to steal something. Like duh.

It also involves a fair old amount of contradiction. Just to repeat myself a little, Wondy is the goddess (of war) and quibbles about Hermes in the Homeric Hymn to Hermes aside*, gods don’t pray to other gods. Even if we thought they might do in the nu52/DCYou, Meredith Finch established very recently that gods and goddesses do not go into each others’ temples. So what happens this issue? Wondy enters Gaia’s temple and she prays to another goddess. And starts desecrating it, too.

Oops. Aside from the temple violation and desecration, perhaps the other reason she didn’t get a response is that despite being raised on an island of Amazons who all worship the gods, she’s worshipping like a Christian: silently, with hands together and just expecting her wishes to be granted without offering anything in exchange.

That’s not how it’s done, Wondy, and you know it – she can’t read your mind. Tell her what you’re going to do for her in exchange for her help! Where’s your sacrifice? You don’t think asking for the king of the gods to be cured of something is at least worth a hekatomb? You haven’t even got any barley meal, let alone washed yourself with khernips to purge yourself of miasma.

Those obvious bits of lack of research by Meredith Finch to one side, there are some good aspects to the book. Once again, there are hints that Finch is trying to tie everything together into something that has the potential to be edifying (Hera becoming full-on queen of Olympus). There are references to myth and the reborn Apollo is becoming a bit more like his mythical self, too.

But does Wondy really have to be this stupid?

* Hermes does set up the beginnings of a sacrifice to other gods, but that’s before he becomes a god and he doesn’t actually start praying IIRC

DC Comics: Bombshells #31
Plot
The Battle of Britain begins! Wondy turns up on her death horse with Steve Trevor!

Injustice: Gods Among Us: Year Five #9
Plot
The anti-Superman faction of superheroes is setting off bombs around the world too fast even for superheroes to stop. All Wonder Woman (and Cyborg) can do is watch helplessly from Watchtower.

Sinestro #20
Plot
The still be-ringed Wondy and Supes are still fighting the space vicars. However, it’s almost all over now. Sinestro’s almost impressed by how strong they are. Almost.

The Legend of Wonder Woman #15
Plot
Diana may be happy to have bumped into the famed Steve Trevor again – he miraculously survived a plane crash, don’t you? – but he isn’t to see her. Themyscira has wiped (virtually) all memory of her.

When he asks her for her name, Etta covers for her lack of surname – and Diana Prince is born.

And what could be more Volume 1 than Diana Prince being a nurse? Because even if women can’t be soldiers, they can go to wartime Europe to be nurses… or singers…

Is it any good?
You do have to hand it to Renae de Liz. As well as giving us one of the most beautifully drawn titles around, you have to admire her for managing to capture so many different Wonder Woman sources and ideas and assembling them into a coherent whole, one with its own twist on its predecessors’ ideas, in what is shaping up to be what should more accurately (or more lucratively) be called Wonder Woman: Year One.

Etta’s now back down to managable levels, Steve and Diana are very sweet together (although I’m not sure a real 1940s Steve would have been so keen on women fighting in the war), and it’s all good fun.

Just a little bit too less dialogue and a little more action, and the whole thing would be damn near perfect.

So fingers crossed on that for next issue. Or the one after that. Some time?

Question of the week: who’s your favourite comics-inspired TV or movie character?

The news for Thursday 17th February 2011