Can you feel it? It’s nearly here. No, not your forthcoming tour of the Wonder Woman family museum.

Wonder Woman‘s out tomorrow! Woo hoo! Although I’m seeing it on Friday, because I’m old and don’t do the late night movie thing any more.

Excitement’s growing everywhere in fact, because not only is just about every review a positive one, but its current rating on Rotten Tomatoes is an unheard of 97%:

Expectations are high to say the least.

The great and the good have already been to see it, of course, since although the London premiere this week had to be abandoned, the LA premiere still took place, with more or less everyone involved with Diana in some form over the years attending, from Susan Eisenberg (Wonder Woman’s voice in the Justice League cartoons and Injustice games) through artists Cliff Chiang and Tony S Daniel, writer/artist Phil Jimenez and movie/comics writer Geoff Johns all the way to Lynda Carter and Gal Gadot themselves.

Less positively, there’s been a minor kerfuffle over some planned women-only showings of the movie in New York, but the proprietors of the cinema have taken it all in their strides rather well.

The publicity machine continues, of course, with Gadot putting Conan O’Brien through some fight training on his show:

Oddly, though, last week only saw the release of one new comic featuring our Diana, Wonder Woman #23, although as it happens, it’s rather an important one. So follow me after the jump as we get to watch Diana finally sort the truth from the lies. Or you can just stay here and watch Jim Lee drawing Wonder Woman for charity – your choice.

Wonder Woman #23
Plot
Ares explains that he went mad but that Hephaestus and Aphrodite were able to bind him. However, to ensure that no-one – including his sons Phobos and Deimos – could free him or kill him to access his powers, the Amazons were created to guard Ares.

To prevent Phobos and Deimos finding out how to get to Themyscira, Diana’s mind was not only wiped of the truth but a fictional Themyscira was created to ensure she never tried to find a way back.

How then to defeat Phobos and Deimos now they’re on Themyscira? Well, it wasn’t Hephaestus’ chains that stopped Ares in the first place – it was Aphrodite’s love that defeated war and love will conquer fear and terror, too…

Unfortunately, though, Diana has to leave Themyscira again – and Veronica Cale’s daughter will have to stay behind on the island, too, if she’s to live as a whole person again. That means two mothers and two daughters will have to say goodbye. 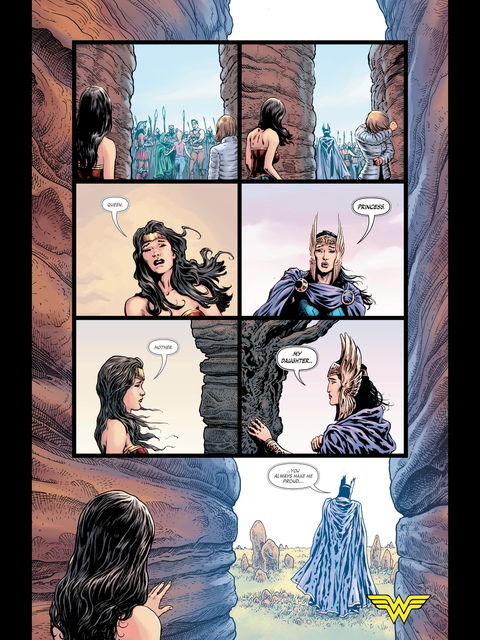 Is it any good?
Well, it’s about as good as we ever could have hoped for.

Obviously, it doesn’t answer ever continuity question raised by the Rebirth reboot. Does that mean everything we saw involving the gods, whether it was in Men of War, Justice League, Wonder Woman, Superman/Wonder Woman or Teen Titans, was all part of the gods’ fiction? How about Grail and her mum, and Diana’s supposed brother? Where does this leave Donna Troy’s origin story? What about Diana’s adventures in Justice League of America with Zeus’ thunderbolt? Is she even the daughter of Zeus any more and if she isn’t, why did the gods make her think that? Was Steve in the airforce or the navy and why did it seem like he was a pilot for a while? When exactly did Diana meet Ferdinand and was Cheetah ever the master criminal who fooled Diana that Justice League suggested?

The list of questions could probably go on for some time, in fact. Of course, Wonder Woman and indeed Greg Rucka’s ‘Truth-Lies’ storyline doesn’t have to answer all of them, given that the Rebirth universe is probably engineered by Doctor Manhattan and he could be responsible for a load of those problems, rather than the gods. After all, elsewhere, Action Comics has basically just rewritten the timelines so that Wonder Woman and Superman never had a relationship, so who knows how much continuity there is to reconcile any more, anyway?

So, I’m actually not that fussed by the conclusion of the storyline not tying everything up with a neat little bow. Okay, so it means that both the good and the bad from the nu52 and the DCYou have been expunged from history or revealed to have ‘all been a dream’, which is a shame, because there was some real good in there. But what’s done is done. Rucka was tasked with taking Wonder Woman and indeed Wonder Woman back to her foundations and her essence, and he’s done that as much as could reasonably be expected, given that huge numbers of disparate writers were producing nu52 as though it was the actual interlocking DC Universe going forward, rather than something that would have to be reset in some way in less than a decade. To achieve his aims, he’s brought back old heroes, friends, allies and enemies, and made the gods once more the patrons rather than the abusers of the once-again lovely Amazons, more so, in fact, than they ever were in Volume 2. He’s done it well and made Wonder Woman a warmer place for its characters to live in.

Indeed, he’s turned the clock back so far, we’re basically at the beginning of the George Perez run of the title in the 80s, with both Ares and Aphrodite now looking like Perez’s versions, rather than the versions he oversaw himself, and the pane depicting the birth of the Amazons a direct echo of both Perez and Jonny Byrne’s work. Perhaps we’ve gone even further back – Aphrodite defeating Ares and Diana defeating Phobos and Deimos through love and loving submission is early Volume 1 at its peak, William Marston’s message writ large.

So kudos to Rucka for doing exactly what was asked of him as well as anyone could… and then going out on a high. What he’ll leave as the starting point for the next author, Shea Fontana, remains to be seen, but she has some ideas of her own as to what to write about, at least.

What have you been watching this week (w/e August 2)?

A look back at the week’s TV