Last week, I left you with a conundrum:

I also left you with the clue that it was going to be a Wonder Woman-centric Year. So, did you guess correctly, oh wise one, because Year Four of Injustice: Gods Among Us is going to be all about the Greek gods and how they’re taking Superman’s new regime. Let’s see who they bring into the war (there’s a clue there)…

Also out last week was the first of a three-part story in Sensation Comics Featuring Wonder Woman, in which diplomat Wonder Woman tries to broker peace in Africa, something in which at least one god also has an interest.

And as it was Free Comics Book Day last week, we also got a preview of Justice League #41, which shows us hints of what’s to come this month in the Darkseid War. Turns out Wondy might have a very similar new enemy to fight, one with an odd taste in clothes – and that this might turn out to be one of the most important issues for Wonder Woman continuity since the nu52 began…

Injustice: Gods Among Us – Year Four #1
Plot
The gods are feeling left out and neglected, with Hercules feeling the problem the most. 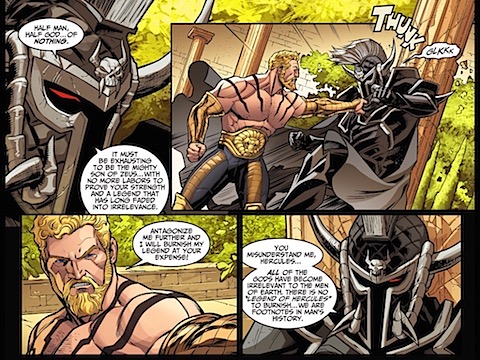 Meanwhile, Superman’s being a dick to everyone, something Wonder Woman counsels against.

He’s a bit grumpy because his bestest bro Batman is still his enemy. And things are about to get worse – Batman’s grown a beard. Oh yes, and decided to become allies with Ares. 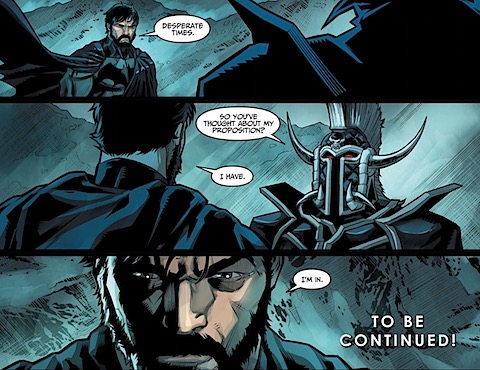 Is it any good?
New beginnings and all that, so a little hard to tell if this year is going to be any good. Obviously, the usual caveats apply, this being an Elseworld, etc, but Superman’s dickishness is uncharacteristic and while Wonder Woman’s trying to be conciliatory, her basically saying that Superman’s obvs more powerful than she is is a little untrue and uncharacteristic. The artwork doesn’t help with this, since she’s very much portrayed as subordinate to him, albeit an ally.

All the same, she is the one telling Superman to stop being a dick to his friends, which is clearly The Right Thing To Do, so there are some definite plus points there.

Then we have the gods. As with Wonder Woman herself, the Injustice versions of the gods are clearly variants of the Volume 2 characters, rather than actually them. While we’ve had Ares before, looking as he’s done for most of his Volume 1/Volume 2 appearances, he did of course change in the nu52 into a Brian Azzarello-alike; but before then, Greg Rucka and Drew Johnson helped to give Olympus, Ares and the rest of the gods new looks during their run, back circa Volume 2 #196 (I’ll be coming back to Greg in a minute).

These are not those gods – that might be a bit too nuanced for a slugfest:

Similarly, Hercules has a different look here to when he was the more accurate Heracles of Volumes 2 and 3 under Perez, Byrne and Heinberg.

However, again, it’s too soon to know where this is going, but suffice it to say, it’s somewhere Else. 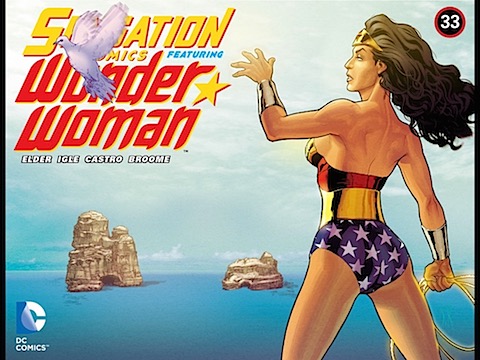 Sensation Comics Featuring Wonder Woman #33
Plot
It’s war in the central African republic of Itari, and Wonder Woman wants to stop it. This she’s going to do diplomatically with the help of her old friend Steve Trevor.

Unfortunately, while Diana’s sitting round a negotiating table, a certain god of war has feet on the ground in Itari itself. 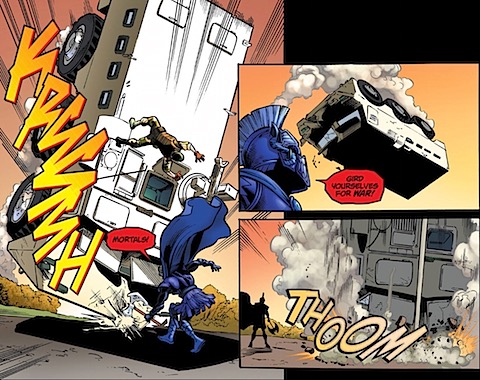 Is it any good?
To be honest, while it’s nice to have enough pages for a story to breath, too much of this feels like fan service. As well as the Wonder Woman twirl pioneered on the TV series and later incorporated into the comics (a gift of Aphrodite, it’s explained this issue),…

… we obviously have Steve Trevor himself (who inexplicably describes himself as a soldier rather than an airman) in his Volume 2 ‘old man’ persona; we have a reference to his wife and long-time Wonder Woman character Etta Candy…

…and Ares, of course, in his usual form (see earlier), although his appearance from a murder of crows is rather nice (a reference to Gail Simon’s Murder of Crows, which featured the children of Ares?). True the costume is once again different, from the skirt through to the red gloves, which isn’t something I remember ever seeing before, particularly since the gloves come and go between fights. 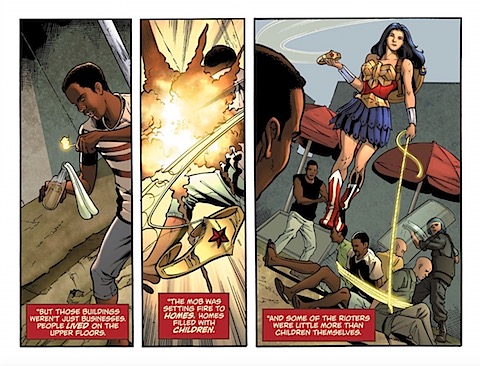 Is this the first time that “the gloves come on” has been used to mean it’s fight time, I wonder?

Anyway, I think the most obvious sign this is Volume 2 territory is that the whole thing seems to be a sequel to a minor part of Greg Rucka’s first Wonder Woman issue, #195, in which Wondy arrested on behalf of the United Nations the unnamed general-dictator of an equally unnamed African republic.

Given the introduction on the first page, which explains that “only a few years ago, Wonder Woman aided UN forces in overthrowing the previous Itari government, an oppressive military dictatorship led by General Renauld Abaku”, I think it’s clear that despite the added names, this is who we’re talking about.

‘Fanwank’ to one side, though, it’s actually quite a thoughtful issue, with Wonder Woman relating how she feels like Sisyphus (good Greek myth reference) in that despite her best efforts, she’s failed in her mission to stop war (and by implication Ares). No matter what she does, war keeps coming back.

Of course, as the nu52 points out, if you actually end up becoming the god(dess) of war, maybe you can genuinely can change its nature, so let’s see how Volume 2 Wonder Woman fares in this endeavour over the next couple of issues.

Free Comic Book Day: Justice League #41
As this is just a preview, rather than the whole issue, I can’t so much review it as offer a heads-up that our Wondy looks like she’ll feature heavily in the Darkseid wars. Most interesting point is that Darkseid has a new daughter, Grail, who clearly grew up on the planet “Male Fantasy”.

So why is this interesting? For a couple of reasons. First, we now have more backstory for the nu52 Paradise Island, albeit backstory that’s largely borrowed from Volumes 1 and 2, so is more confirmation than innovation.

Basically, it seems these Amazons were created only by goddesses (so not just Aphrodite, as in Volume 1, but no Hermes, as in Volume 2) to ‘inspire and protect mankind against the influence of Ares’ – again a variation on both Volumes 1 and 2. I’m not quite sure how well that fits with what we’ve seen in nu52 of either the gods and goddesses or a civilisation that fears the outside and only wants to shag-kill a few sailors every so often, but let’s go with it for now, since this comes from Geoff Johns and he’s the boss. And it redeems the Amazons quite a bit.

Secondly, we get an origin for Diana’s name, being as it’s Roman rather than Greek so an odd choice for the Amazons (although not as odd as Donna Troy…). Here, it’s described as part of the attempt to obfuscate the identity of her father, Zeus, which included suggesting she was originally made of clay.

Thirdly, we find out that Grail’s mum was the first Amazon to leave Paradise Island. I’m not sure how compatible that is with Demon Knights, but I’m not sure anyone cares about that. Probably even Paul Cornell doesn’t care about Demon Knights any more, and he wrote it.

More probably, it’s supposed to mirror the Volume 1 continuity of Diana supposedly being the first Amazon to leave the island.

I say this because Grail’s origin is clearly a mirror to Diana’s nu52 origin, being as she turns out to be the daughter of a (new) god and an Amazon, just like Diana is the daughter of an (old) god, Zeus, and an amazon, Hippolyta.

This kind of origin mirroring isn’t the first time this has happened in Wonder Woman’s history, of course – most notably, the magnificent Eric Luke did some great work with Kronos (Zeus’s dad) and Devastation, creating an enemy made from clay and blessed by six gods and goddesses just like Wonder Woman was:

We also get a prophecy of the future, with Batman seemingly becoming a New God and Diana being the one who saves the world. Or something.

On the whole, then, on the Wondy side of things, it looks like we can look forward to a combination of the sublime art of Jason Fabok together with Geoff Johns reaching peak Geoff Johns – epic fanboy references, epically told, but with cringe-inducing touches of inanity. I’m very glad he’s never touched Wonder Woman with his patented ‘Geoff Johns crassometer’ but he’s brought in enough old school-touches in terms of continuity and redeeming the Amazons that I’m glad he’s got this close, at least.

Clearly an issue to look out for when it arrives later this month.