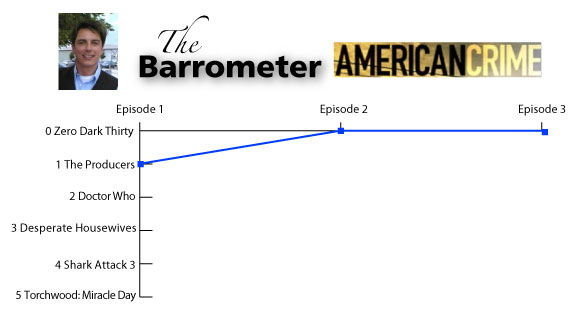 So what is an American crime? Well, according to the rather brilliant ABC show American Crime, it’s a regular crime but observed as simply part of a wider picture, in which systems and attitudes lock individuals into situations and behaviours they can’t escape.

Following on from an apparent burglary in which a veteran is killed and his wife raped, the show depicts how the crime and the investigation affects the families of those involved. But it also asks why the crime happened, how society views the crime, whether the crime is indicative of larger problems and whether there’s a middle ground that could be reached by everyone that’s unachievable thanks to the extremes and rules society lays down.

Following a first episode that was perhaps a little self-conscious of its own importance and that occasionally escaped from its combination of artful direction and verisimilitude to give us aspects that were a tad ‘writerly’ in their unlikeliness, the following two episodes have barely put a foot wrong in showing us the insides of the American justice system and how it can trap those who have barely done anything wrong or who would benefit from either treatment of human kindness. It’s tried to put in the shoes of junkies, drug dealers, legal immigrants, illegal immigrants, Latinos, black Americans, white Americans, fathers, mothers and everyone else as their lives overlap and they fail to understand one another, only knowing their own lives and what society tells them to be.

The show’s a hard watch. It is literally the last thing I watch out of every week’s viewing, not because it’s a bad show, but because it’s such a dishearteningly true picture of reality, without any glimmer of hope and goodness to relieve the misery, beyond the fact it’s on broadcast TV so can’t quite tread into the darkest realms. That’s why I’ll only doing my third-episode verdict on a Wednesday, when the show airs a new episode on a Thursday. That’s why the ratings keep dropping.

But as I’ve said before, if this were on HBO, there’d be no doubt that everyone would be calling it the most important, most realistic, most astutely observed crime drama since Southland or perhaps even The Wire. If you have any interest in quality TV, this is the one American show you should be watching right now.

Barrometer rating: 0
Rob’s prediction: With these ratings, it’s unlikely to survive, so catch it while you can.

Thursday’s “All We Hear Is Radio Torchwood” news

Prequels to The Wire