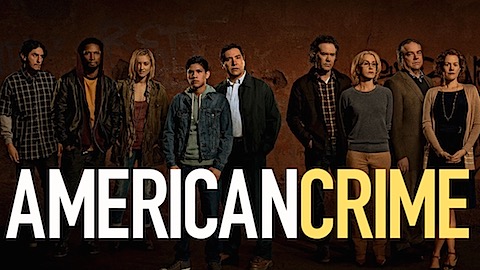 Every so often, the American entertainment media decides it needs to make something Very, Very Important about race in America. Race and crime and drugs. Hopefully, in some sort of ensemble and/or anthology format. Something that’ll make up for not talking about them in an adult manner for the previous five to 10 years.

American Crime is such a Very, Very Important show and it really, really does know it. It is also quite important, too.

Following on from the likes of Crash and The Wire but without much by way of humanity, accessibility or humour, American Crime is a slow-moving, lovingly made, beautifully shot piece, filled with overlapping stories and fine actors, that you almost certainly know you should be watching but might well struggle to find the energy to do so, once you remember that the previous episode sucked all the joy of life from you.

Created by, written by and directed by John Ridley Jr (12 Years A Slave) and starring the likes of Timothy Hutton, Felicity Huffman and Penelope Ann Miller, it sees Hutton and Huffman’s war veteran son killed during an apparent burglary and his wife raped. Soon, a young Latino man is arrested, as is a black meth addict, and the racial battle lines are drawn, as the case proceeds. Except then the twists set in, muddying the waters.

Miserable already and the show only gets worse over the course of the first episode, as we see parents learn tragic things about their sons they’d rather not, people’s alcoholic pasts used as weapons against them, and lives destroyed. The script is thoughtful, giving us respectful, undramatic professionals, ranging from police to doctors to journalists, as well as drug addicts who are more than just their next fix, while refusing to make anything black and white – or simply Black and White. The acting’s first rate, in particular from Hutton, who it was possible to forget while watching Leverage was the youngest ever winner of an Oscar for supporting actor but who makes sure you know it here.

The trouble is that it’s a real struggle getting to the end of even this first episode. Hutton’s anguish is powerful, the bleakness of his and Huffman’s marriage horrifying, and while the drug addiction scenes never exactly hits the absolute misery of Requiem For a Dream, for example, they’re about as close as network TV is going to get.

It’s also pretty slow-moving, with just the occasional implausibility to take you out of all the verisimilitude – why exactly are those drug dealers watching ABC’s Sunday night chickfest Revenge? Why do the other dealers have a copy of Country and Landscape to read? Yes, there’s three-dimensionality to characters, but there’s also downright unlikeliness.

The show does have some thoughtful things to say about race along the way. Huffman’s character, for instance, hears ‘Latino’ and automatically assumes that the suspect in her son’s murder is an illegal immigrant, even though he was born in the US and his father is a proud legal immigrant.

If you can force yourself to eat a regular dose of greens every week that not only will drain you and leave you feeling saddened and perhaps even frightened by the world but wants you to feel that way, too, American Crime is about as good a crime drama as you’re going to get. If not, you’ll be missing out, but I won’t blame you… because I might be joining you.

A look at Fox’s Fall 2008 shows: Dollhouse; The Cleveland Show; Fringe; Sit Down, Shut Up; Do Not Disturb; Lie to Me; Courtroom K; and Secret Millionaire

Thursday’s “All We Hear Is Radio Torchwood” news