The heat’s obviously getting to him.

As you may recall, Sky can produce quite lovely PR gifts in an effort to get me to write about their programmes. However, this week, they’ve gone in exactly the opposite direction. To promote their new comedy, Trollied, which stars Jane Horrocks, they’ve sent me these:

Utterly useless and a waste of money. What am I going to do with them except put them in the bin? Although maybe I should lay them down for an eBay auction should the show get popular. Judging by this trailer, though, it won’t, even though Ash Atalla is behind it. It starts August 8 on Sky 1 HD, by the way.

So I’m going to out myself as a bit of a Wonder Woman fan. I love her in the comics (with the right authors such as George Perez, Gail Simone and Greg Rucka), we have the whole 1970s TV series on DVD, we have the animated movie on iTunes and lovely wife has a Wonder Woman mug to drink from. I even have a couple of Wonder Woman encyclopaedias on the shelves.

But I’ll tell you for why. As well as Wonder Woman being one of the very few iconic and powerful female superheroes out there, the DC universe is such that while Superman is off fighting sci-fi enemies, Batman is fighting human grotesques and Captain Marvel is off beating up magical villains, Wonder Woman is the fourth iconic pillar: she’s the mythological hero, fighting gods and monsters. Her stories are unique and she has a necessary, irreplaceable area of the comics world to call her own.

But there’s still more to her: she is literally an emissary from the Greek gods, who are second to none in the DC universe (no Christian or any other monotheistic gods at the top of this pantheon), and they have imbued her with their powers to give their mortals a message: there’s a better way to live than patriarchy.

In other words, despite what you may or may not think about her costume, she’s just about the only feminist and indeed religious superhero out there and when she prays, her prayers are answered. 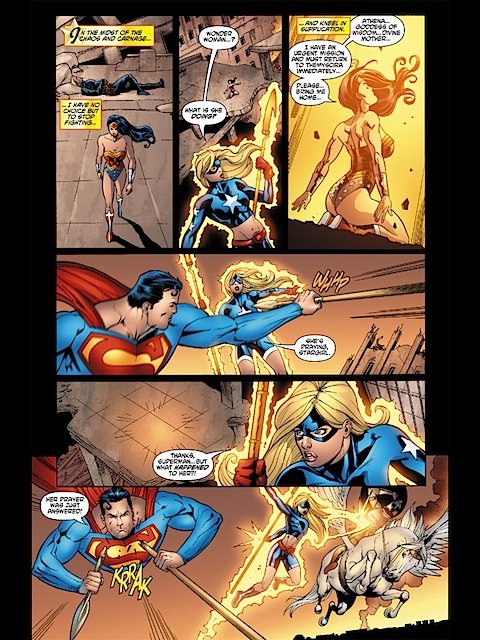 Wonder Woman’s TV and movie career is a little checkered. There was a dreadful 1967 pilot that tried to do for Wonder Woman what the Batman TV series did for the caped crusader – camp it up. Then Cathy Lee Crosby did a quite awful TV movie version that preserved most of the trappings of Wonder Woman, but robbed her of all her powers.

Lynda Carter had a much better time of things from 1976, with three seasons of The New Adventures of Wonder Woman. The first season, set as the original comic was during World War 2, wasn’t bad and did a reasonably good job of presenting the Wonder Woman of the early comics.

Nevertheless, none of these versions have really depicted the comics version of Wonder Woman, who can fly, is as strong and as fast as Superman, can talk to animals, has the wisdom of Athena and is a trained Amazon warrior. That means it’s largely been left to animated shows and movies to depict the real Wonder Woman halfway decently.

Recently, however, in this, Wonder Woman’s 70th anniversary year, NBC tried to make another TV version of Wonder Woman. For some reason, however, they got David E Kelley of Ally McBeal, Boston Legal and Harry’s Law fame to do this. It’s not been picked up for series, so will probably never get onto TV (just like that very first Wonder Woman pilot), but just for the sake of completeness and curiosity, I’ve watched it and, well, it’s exactly what you think it would be like: never has a superhero worried so much about the law, jurisdiction, search warrants and the difficulties of her love life, as well as the pressures of running a company and being a woman in today’s world.

Here’s the intro and a fan-made compilation-trailer – the full pilot is at the end!

END_OF_DOCUMENT_TOKEN_TO_BE_REPLACED

It cost all of $10m dollars to make, it runs to over five minutes and explains Superman’s return to Krypton and then return to Earth, but it never made it into Superman Returns. It’s the original opening scene to the movie and is probably the most imaginative, original thing that came out of the entire thing. But you can see why they cut it.