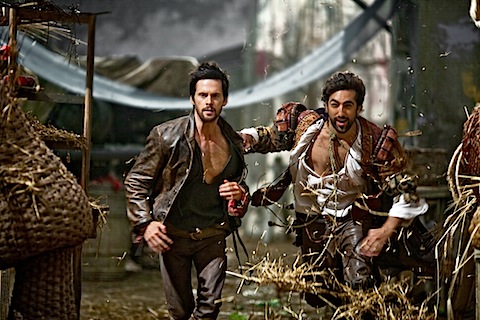 You might have thought the horror that was Torchwood: Miracle Day had ended. There’s no more Torchwood, thanks to the series being so poorly received, even the majority of die-hard Torchwood fans couldn’t bear any more episodes. Yet like that giant hole in the middle of the Earth, sucking the joy from life in that show’s finale, so its legacy carries on.

That legacy is an alliance between BBC Worldwide and Starz aimed at creating yet more dramas as good as Torchwood: Miracle Day – yes, that good – and Da Vinci’s Demons is its first bastard offspring. On paper, it might have seemed a good idea, with David Goyer, the co-writer of Batman Begins, crafting a historical fantasy series about the early life of Leonardo Da Vinci. The well known Renaissance polymath, he’s popped up in enough shows over the years that he probably deserved a show of his own.

But in practice, it’s not. Starz has tried to do historical shows before. It’s had huge, deserved success with Spartacus; Magic City may just be nasty but it’s a loving recreation of the 1950s Miami at the very least. Unfortunately, rather than aping either of those two shows, it’s decided to go the Camelot route and produced a genre-busting show that marries Camelot‘s sex, nudity, poor action and complete bypass of virtually all history; the BBC’s child-friendly but atrocious Merlin, Robin Hood and Bonekickers; the setting and political intrigue of The Borgias; the ridiculous conspiracy theories of The Da Vinci Code; and elements of movies ranging from Batman Begins to Hudson Hawk. Yes, the probably gay Florentine polymath Leonardo Da Vinci is actually a leather-jacket wearing shagger of women, prone to the occasional sword-fight with the local guards, who somehow gets mixed up with the magical secret society that is the Sons of Mithras, all while flying people around in his inventions.

And it’s all filmed in Wales with an almost entirely British cast. Be proud. We made this.

About
In a world where thought and faith are controlled, one man fights to set knowledge free.

The secret history of Leonardo da Vinci’s tantalizing life reveals a portrait of a young man tortured by a gift of superhuman genius. He is a heretic intent on exposing the lies of religion. An insurgent seeking to subvert an elitist society. A bastard son who yearns for legitimacy with his father.

He finds himself in the midst of a storm that has been brewing for centuries. A conflict between truth and lies, religion and reason, past and future. His aspirations are used against him by the opposing forces of the time—luring him into a game of seduction where those who despise his intellect need him most.

Leonardo must take up the fight against foes who use history to suppress the truth. A hero armed only with genius, da Vinci stands alone against the darkness within, and the darkness without.

Facing an uncertain future, his quest for knowledge nearly becomes his undoing as he explores the fringes of his own sanity. Da Vinci throws himself into his genius and emerges as an unstoppable force that lifts an entire era out of darkness and propels it into light.

His story becomes a mirror into our own world, calling us all to join his fight to Free the Future.

Is it any good?
No, it’s absolutely dreadful.

Now, there’s nothing inherently wrong with playing a little fast and loose with history in a fantasy show. Robin of Sherwood did a fantastic job of marrying history with fantasy, mixing together Anglo-Saxon and Celtic myth with British history very nicely. But that was comfortably located in the 13th century, never played too fast and loose with the possible (until the third, somewhat sillier season), and dealt with a legend – Robin Hood – who didn’t actually exist.

But Da Vinci’s Demons faces a steeper challenge: dealing with someone who really did exist and rather more recently. Again, not entirely impossible, but you have to play it carefully.

Except Da Vinci’s Demons doesn’t. It just goes out and fires a blunderbuss full of bollocks square in your face and asks you to believe it.

So Da Vinci – modelled ever so slightly on the famous painter – here is a somewhat camp leather-jacket wearing Englishman who smokes opium and goes around swordfighting black leather-clad masked guards in order to uncover the ‘Book Of Leaves’, which contains the ancient knowledge of the “ancient society of the Sons of Mithras”, which the slightly menacing Alexander Siddig (your go-to-guy these days when you want a slightly menacing, youngish Arabish guy) claims has existed since hundreds of years before Christ (the sons of Mithra, maybe, but Mithras was an early AD god beloved almost entirely by male members of the Roman civil service and army).

He shags female nobility (despite being either gay or chaste in all likelihood), sketches topless women out in fields, and creates working models of all his creations that do actually fly. Since none of the things he created could possibly have worked, this involves a lot of very poor CGI to produce flying, articulated, rocket-propelled robot birds that can reverse and land on a dime. You won’t believe in any of it for a second.

Along the way, he has to navigate through the politics of Florence. Florence, here, is actually a set built in Swansea that, with the aid of some more, quite poor CGI, veers between ‘not half-bad’ and looking nothing like that intensely claustrophobic, built-up city. Everyone dresses in a Venetian style, too, particularly for masked balls.

Da Vinci is looking for benefactors, who might want to pay him for his ideas, particularly as they pertain to military campaigns. Except unluckily for Da Vinci, they might turn out to be spies for secret societies, other families and the like. He also has a young helper on his adventures (Eros Vlahos), presumably to appeal to all the 12 year olds who’ll be allowed to watch the near full-frontal nudity the show offers.

And none of it works. It veers from genre to genre, incident to incident, without concern for narrative, logic, narrative logic or plausibility. In fact, it sneers in the face of plausibility: “You’re so conventional, so bourgeoisie, expecting this to make sense or to be realistic. Here, have Alexander Siddig talking about the circle of time while his eyes glow, you great nancy.”

The cast work hard with what they’ve got. Tom Riley is great, a good choice for a polymath, but a poor one for a swashbuckler. Laura Haddock looks the part (they dress her like Morgan in Merlin) but has little to do but take her clothes off and pout. Elliot Cowan (Darcy in Lost in Austen and a rotter in The Fixer) has even less to do, being ‘actorly’ the sum requirement so far. Lara Pulver (Irene Adler in Sherlock) is a no-show so far (unless i blinked and missed her) and Hugh Bonneville has made a cameo au naturelle, recreating his Bonekickers character with a frightening lack of interest in convincing the audience of the realism of his part.

But unfortunately, the show falls between two stools. On the one hand, it might have been made it work if it had taken itself seriously. Except it can’t, so most of the cast are acting like they’re in a Saturday tea-time bit of tat like Sky 1’s Sinbad. On the other, it could have worked if it had gone for laughs à la Hudson Hawk. Except David Goyer didn’t want to go for that, so intersperses the show with Meaningful Scenes about Da Vinci’s childhood, the Sons of Mithras and more.

As a result, it feels like a more camp version of Robin Hood: Prince of Thieves that is hoping that if it gives you a little something of everything – sex, violence, history, magic, topless women, kids – but nothing too challenging – like a gay hero – you’ll find something you like.

And you might do, if you can switch your brain off and somehow forget that you know there actually was a rather talented Italian guy called Leonardo Da Vinci. Just imagine it’s called, say, He-Man’s Demons and is actually set on Eternia, rather than Renaissance Italy, and it’s actually reasonably fun, if so unfocused, so meaningless, you’ll feel like you’ve been smoking Leonardo’s opium, too. But if you can’t do that – and more likely than not your brain will reject it – then pour a circle of salt around you to sanctify the ground so hopefully we’ll be able to exorcise the ghost of Torchwood: Miracle Day permanently, even if Starz has already picked this up for a second season.